“We want the owl to come back here” 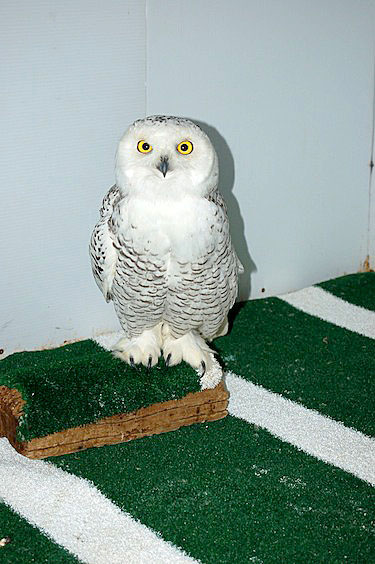 This snowy owl, injured recently in a collision with a Dash-8 aircraft in Salluit, is shown recovering in a Montreal clinic after veterinarians amputated his left wing. (PHOTO COURTESY OF GUY FITZGERALD)

A snowy owl from Salluit is getting an unlikely second chance at life after a run-in with a Dash-8 aircraft earlier this month.

When Air Inuit employee Steven Walker saw the plane landing near a flock of snowy owls on the runway, he thought the worst.

Walker watched as a young owl tried to fly away from the plane but got caught up in its prop instead.

When Walker went out to collect the feathered pile at the end of the runway, he was shocked to find the bird was still alive.

The snowy owl’s wing was badly clipped and its beak was injured, so Walker took the owl home and put it in a shack overnight.

Walker was surprised once again to find the creature alive and alert the following morning. But he knew the animal would need help if it was going to survive much longer.

He spoke to a local friend who happened to be in Montreal, who offered to take the bird to a veterinary clinic there.

A few days later, Air Inuit arranged to fly the young owl from Salluit to Montreal.

Now the owl is recovering at the Université de Montreal’s veterinary clinic for birds of prey, where doctors recently had to amputate the owl’s mangled left wing.

“He’s quite alert now,” Dr. Guy Fitzgerald said in a recent interview. “We’re treating him for pain, and he’s starting to eat well since we treated his fractured beak.”

Veterinarians there discovered the owl is a young male, likely born last spring or summer.

But the owl’s sex factors into what options he has for a future, Fitzgerald said.

That’s because male snowy owls need both wings in order to impregnate a female, so this one-wing snowy owl wouldn’t likely be eligible for a rescue program or sanctuary.

And returning the owl to the wild is not an option either, Fitzgerald said.

So the owl’s future is in the hands of his two Salluit caregivers, who are talking about bringing the animal back north and building a small cabin for him to live in.

“We want the owl to come back here,” Walker said. “We want to open a non-profit organization with him as our mascot.”

Fitzgerald said he doesn’t normally support keeping owls in captivity for pleasure, but this owl’s caregivers have shown to be “very open.”

“If the owl comes to accept his captivity, it has potential to work,” Fitzgerald said. “I don’t know what kind of quality of life he’ll have, it will depend if he keeps up a good spirit.”

If the animal is happy and well-cared for, the snowy owl could live for 20 years.

In the wild, snowy owls feed on lemmings, rabbits and other birds. The one-winged owl has adapted to a diet of mice at the Montreal clinic, Fitzgerald said.

Unfortunately, snowy owls are injured and killed quite often in Nunavik when they collide with planes, cars and electric wires.

Fitzgerald said his clinic treats one or two owls from Nunavik every year, and another 350 from elsewhere in the province.

Salluit’s injured snowy owl will stay in Montreal for another month until he is strong enough and until feathers grow over where his wing once was.