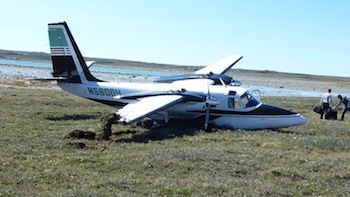 This 1971 Aero Commander 500S Aircraft en route from Oregon to Switzerland crash-landed shortly after take-off from Rankin Inlet’s airport on July 18. All three passengers walked away, but their plane, shown here shortly after the crash, is a write-off.

First it was a serious aircraft crash — now it’s the subject of simultaneous investigations by the Transportation Safety Board, the RCMP and insurance adjusters.

Both the Transportation Safety Board and the RCMP are now investigating the circumstances around the July 18 crash-landing of a small twin-enginee aircraft near the Rankin Inlet airport.

At about 1:50 p.m. the Rankin Inlet RCMP detachment received a call that an airplane had crashed northwest of the community’s airport.

The three male passengers, all from the United States, on board the 1971 Aero Commander 500S Aircraft were travelling en route from Oregon to Switzerland.

When the local fire department and emergency services arrived, the men were already a short distance from the aircraft, walking back to the airport, about a kilometre away.

They suffered no serious injuries, but their plane sustained major damage to its belly, landing gear and tail.

Shawn Maley, Nunavut’s director of airports, who arrived on the scene shortly after the crash, said the pilot was extremely lucky to have found the “best place” possible around on which to land — a flat, soft and relatively rock-free area of tundra.

The airplane is still lying at the crash site, awaiting the arrival of investigators from the TSB and insurance companies.

Although a July 19 RCMP media release asks anyone who has any information and have not yet spoken to police to call the local RCMP detachment and or to call Crime Stoppers, Maley and Peter Hildebrand, the regional investigator with the TSB, said they were unaware of any police investigation into the circumstances around the July 18 crash.

A recent master plan report on the Rankin Inlet airport did note problems with access control and security on the airfield, saying that “security fencing is relatively minimal at the airport and is not continuous around the property’s perimeter.”

But the aircraft was locked up in a hangar before its ill-fated take-off, Maley said.

Still, the TSB investigator, due July 20 in Rankin Inlet, plans to look thoroughly at all the possible causes of the crash, taking samples of fuel and damaged parts.

“We think there’s a question unanswered as to why the engines didn’t produce power,” Hildebrand told Nunatsiaq News.

The aircraft, also used widely by commercial services, had apparently taxied more than once before take-off, he said, with no signs that its engines would lack enough power to reach a flyable altitude.

Because no one has been able to “put a finger” on why the engines failed, Hildebrand said the TSB decided to carry out a full investigation on the US-owned aircraft.

Hildebrand commended the pilot, who did attempt to return to the runway, for deciding to land while he still retained control of the aircraft.

The TSB report is likely to take several months to produce, Hildebrand said.