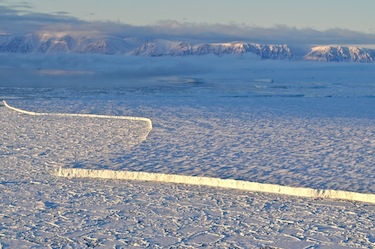 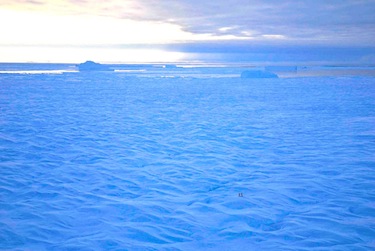 This aerial photo taken Oct. 18 of two scientists deploying a satellite beacon on an ice island (seen a pair of tiny dots near the bottom right) shows the immensity of these ice islands which are now heading south from Ellesmere Island towards Baffin Bay. (PHOTO BY RENE HARDY/ARCTICNET)

These ice islands, part of a huge slab that broke away from Greenland’s Petermann glacier this past August, could produce serious short and long-range impacts, Jean-Eric Tremblay, lead scientist on board the Amundsen, said in an Oct. 20 interview from the Coast Guard research icebreaker.

When the ice islands move — reaching an average speed of 40 kilometres an hour during the late summer — they can deliver a lot of damage, Tremblay said.

If the ice islands pass over “hot spots” — like Lancaster Sound or Isabella Bay — they may disrupt food supplies for marine mammals, Tremblay said.

That’s because as the ice islands move, their bottoms churn up the sea floor, uprooting undersea life, such as clams and starfish.

“All these organisms are very important food sources for animals like seal and whales or walrus,” Tremblay said.

And even when they’re stationary, these ice islands block all light in the waters below them. This means they could further disturb the High Arctic food chain, because when sunlight returns next spring to higher latitudes, plankton will lack the sunlight it needs to grow, Tremblay said.

The ice islands will take about a year to make their way down the coast of Baffin Island and another year to make it to Newfoundland.

During this time, they will also pose a hazard to shipping, Tremblay said.

When the ice islands pass along southern Baffin Island they may also stir up offshore methane deposits on the sea-bed so that these are released. Methane is a potent climate-warming greenhouse gas.

And, as the ice islands melt, they’re expected to upset the balance of fresh and salty water in the Arctic waters, blocking the development of some tiny organisms and potentially upsetting ocean currents circulating warm and cold water around the North Atlantic.

This past week, scientists on the Amundsen were able to land by helicopter on two of the three pieces of the ice island, known as Petermann B 2010, where they deployed three satellite beacons to help them better track the ice islands’ passage south.

A team from ArcticNet’s research network, the Canadian Coast Guard and the Canadian Ice Service, led by Tremblay, the chief scientist on board the Amundsen, put in two beacons on the northern and southern portions of the larger of these ice islands, more than 90 square kilometres in size. They placed another beacon near the centre of the smaller ice island of about 28 square kilometres.

The tube-like beacons will remain half buried in the ice as the ice islands make their way down the coast of Baffin Island.

But this deployment operation was no easy task, Tremblay said.

First, the team from the Amundsen had to find the ice islands. Then, they had to wait for good enough weather to land a helicopter on the ice and find a suitable spot to plant the beacon.

Was it worth the effort? Yes, said Tremblay, because when the ice islands break up, “we hope we have at least one beacon on a small piece” to continue tracking their path south.

“The worst thing that could happen is that the ice island would crack where we put the beacon,” Tremblay said. “That’s why we put two on the largest fragment at each end, so if it breaks [again] we’ll be able to follow the two pieces.”

The ice islands were born Aug. 5 when a large chunk of Greenland’s Petermann glacier broke away, creating an ice island of 280 square kilometres in size and 200 metres thick.

In early September, after it collided with Joe Island in Nares Strait between Ellesmere Island and Greenland, this ice island then split in two pieces of 160 square kilometres and 85 square kilometres, which they dubbed “A” and “B.”

On Sept. 17 Environment Canada managed to drop a satellite beacon on to the larger chunk “A”.

Then, earlier this month, ice island “B” broke into three pieces.

The three beacons, which were installed Oct. 17 and 18 on two of these three fragments, are equipped with iridium satellite phones that will now regularly call in their locations to the receivers at the University of Manitoba.

Scientists linked to the ArcticNet, Université Laval and the Canadian Ice Service also plan to continue their ice tracking efforts, under a new project that will focus on Baffin Bay and be called “ICEBERGS.” 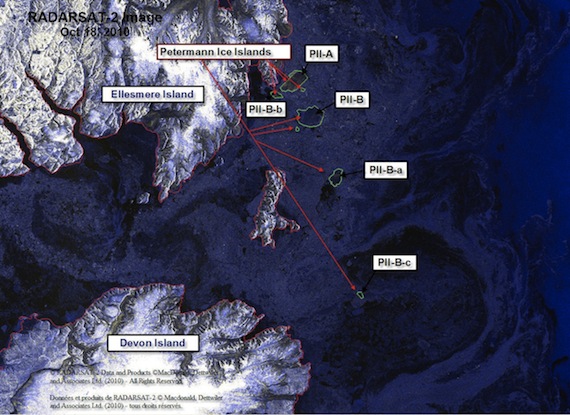 The latest position of ice islands around Ellesmere and Devon islands in Nunavut’s High Arctic can be seen in this Oct. 18 Radarsat image. (IMAGE/ARCTICNET)