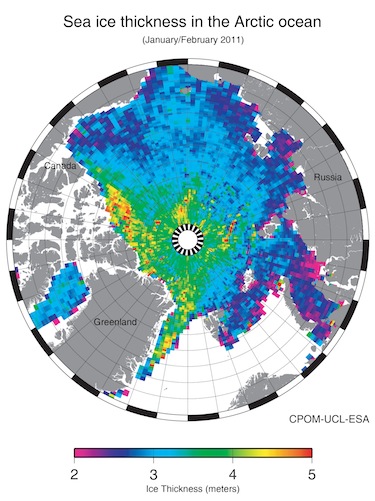 This ice map produced by the European Space Agency’s satellite shows how thick the ice was this past January and February in the Arctic.

The first map of sea-ice thickness produced by the European Space Agency’s CryoSat satellite was revealed today at the Air and Space Show in Paris.

CryoSat spent the past seven months looking down at the earth’s surface from an altitude of about 700 kilometres to deliver its measurements on the thickness of Arctic ice.

To gauge the ice thickness, CryoSat measured the height of the sea ice above the water line.

The measurements used to generate this map were taken between January and February 2011, as the Arctic sea ice extent approached its annual maximum.

Satellite images have already shown that the extent of sea ice in the Arctic is diminishing, with this past spring showing the third lowest Arctic ice extent recorded to date.