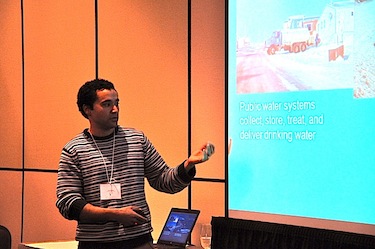 OTTAWA — When you look at a map of Canada’s North, it’s covered with blue patches showing water: rivers, lakes, and other bodies of water that dominate the region.

But for a place known for its pristine waters, just how well can Nunavut communities monitor local water sources to ensure they’re safe to use?

That’s a question Jamal Shirley has asked and hopes to answer.

The director of the Nunavut Research Institute helped launch a research project in 2009 that monitored microbial water quality in two Iqaluit rivers.

The results of that research aren’t shocking, nor are they new, but they’ve got Shirley talking about building local capacity to monitor water quality in Iqaluit and elsewhere in the territory.

“We need to build capacity in the North to do our own water testing,” Shirley told a conference on Arctic climate change and health adaptation held in Ottawa earlier this month.

Continual monitoring is important because local aquatic systems are changing, Shirley says. Streams are drying up, banks are eroding and new species are found.

The research institute was already working alongside York University in 2008 to collect invertebrates from local streams.

Then, when Health Canada offered funding for further research, Shirley said they decided to expand and test the microbes in Iqaluit’s water sources.

The two sites Shirley and his team decided to sample from were Sylvia Grinnell and Apex rivers, where some people continue to draw untreated water to drink.

The two sites were sampled from June to October 2009. Researchers used an enzyme powder added to water, which changes colour. Tests results can be read in 24 to 48 hours.

Those levels aren’t worrisome, Shirley pointed out, but it’s the first time research has been able to determine this in Iqaluit.

“The value of local testing is that you can see the seasonal variation,” he said. “We’ve collected some really valuable information.”

It’s one of the first times that an Arctic river has been monitored for bacteria over a full season, he said — as opposed to collecting samples for a short period and making inferences.

Now, Shirley and his team are working towards getting their local laboratory nationally accredited.

“What better way to put it to use again,” he said. “The funding paid to set up the lab and get some new equipment and bring in a microbiologist from Yellowknife. The more we can do with out own community members and interns, the better.”

Shirley adds that this is strictly an environmental study – it’s not meant to raise concerns about the quality of Iqaluit’s drinking water, as provided by the city.

But Iqaluit’s public water system was built nearly 50 years ago, and its water source, Lake Geraldine, has a limited capacity.

That means the city could be looking for new sites to pump water from and will have to identify and test those sources, he said.