The narwhal: “a silent and efficient killer” 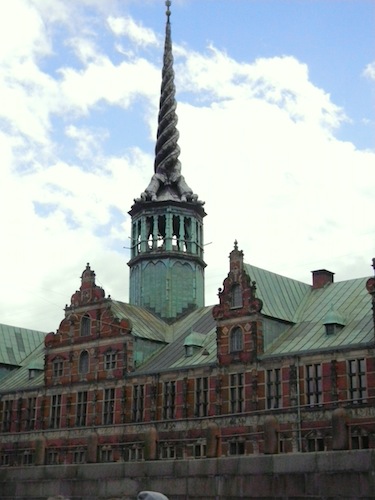 A Greenlandic researcher suggests the tooth or tusk of a narwhal reflects the same architectural design principles that strengthen towers like this one on top of the Copenhagen stock exchange. (PHOTO BY JANE GEORGE)

A Greenlandic art researcher believes he knows why a narwhal’s long tooth is twisted, resolving a “1,000-year-old mystery.”

A narwhal’s tooth acts both as an amazing rudder and as an essential hunting tool, suggests Svend Erik Hendriksen of the Greenland Art Research Institute in Kangerlussuaq.

Unless it played some critical role, the narwhal’s long tooth would be a “quite troublesome body part,” he said in an email to Nunatsiaq News.

To understand why the narwhal tooth looks the way it does, Hendricksen suggests looking at modern architecture.

By breaking turbulent waters with its helical twists — just like on the wire in the wind — the narwhal tooth moves more efficiently through the water, Hendriksen suggests.

The tooth, which can be up to three-metres long, also emerges from the left side of the upper jaw.

That’s a unique location — and one that bucks nature’s tendency to symmetry and balance — but the tooth’s placement is useful when it comes to moving through water, Hendriksen says.

In addition to using its tooth like a rudder, the narwhal also uses the tooth as mallet to stun or kill, he says.

The tip of the narwhal tooth is often broken off, suggesting how powerfully it can move.

“So no matter how beautiful and charming a narwhal may look at a photo of a tourism promotion, so this is a silent and efficient killer,” Hendriksen said.

Such “a flashy front tooth” also plays some role in the narwhal mating ritual, he speculates.

In Denmark and Greenland, Hendriksen is known as a keen observer.

In 2006, he noted that that a design similar to the red and white design of Greenlandic flag, the Erfalasorput, had been adopted by a sports association in Denmark.

Erfalasorput is red and white, with a split circle in the centre, symbolizing a sun that is about to rise over the ice, has been used in Greenland since June 21, 1985.

Hendriksen also purports to have discovered hidden images such as portraits, self-portraits and other images within the works of such artists as Cézanne and Gauguin.

In one painting, he said the clouds and sky actually show a map of islands and suggested that these hidden objects provided a kind of copyright protection to the painters.

As for the purpose of a narwhal tooth, an earlier study by an American dental researcher showed narwhals use their tusks to determine the salinity of water and search for food.

Martin Nweeia of the Harvard School of Dental Medicine said in 2005 that the narwhal’s tooth or tusk is like a giant sensor, with 10 million nerve connections from the central nerve of the tusk to its outer surface.

These allow the tooth to detect changes in water temperature.

To date, human understanding of a narwhal’s tooth has undergone many changes.

Vikings brought narwhal teeth back home to Europe where many thought these “unicorn” horns would protect the owner against food poisoning.