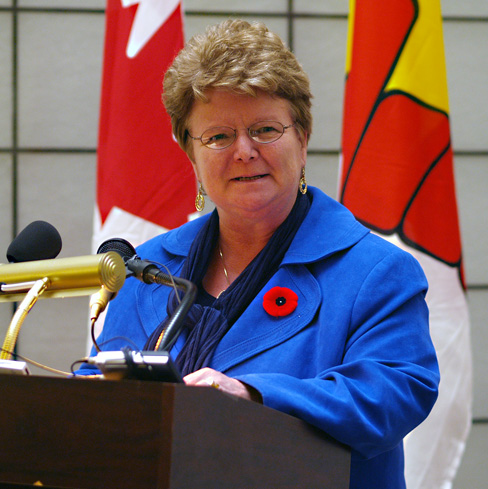 Federal fisheries minister Gail Shea speaks during a news conference in Iqaluit Nov. 9. Shea was in Nunavut to announce a 1,500-tonne increase to the Area 0B turbot quota. (PHOTO BY CHRIS WINDEYER)

Ottawa won’t guarantee Nunavut interests the first right to buy turbot quota when southern fishing companies are selling, according to a government response to a Senate fisheries committee report.

The Senate report, published this past June, echoed the demands of Nunavut fishing industry, who want the right of first refusal to buy turbot quota.

But while the federal government said it’s prepared to “work with Nunavut stakeholders” to find ways to increase the size of Nunavut’s turbot fishery, it’s Ottawa’s view that quota doesn’t belong to Nunavut by right.

But the government appears to promise that any new licenses or quotas in Area 0B, off southeast Baffin Island, would go to Nunavut interests.

The response quotes a 2001 study that recommends Nunavut get help increasing its share of the turbot catch. But the response doesn’t make any specific promises about how to do that.

Earlier this month, federal fisheries minister Gail Shea announced that Nunavut would get 90 per cent of a 1,500-tonne increase in the area 0B.

“It is an improvement,” said Jerry Ward, chief executive officer of the Baffin Fisheries Coalition, at the time Shea made the announcement. “We hope that future increases will all go the way of Nunavut.”

Nunavut fishing interests now control 41 per cent of the Baffin turbot quota. Most of the rest is held by East Coast fishing companies and a small share is held by Nunavik as part of the Nunavik Inuit land claims agreement.

A January federal court ruling also requires Ottawa to consult with Nunavut when southern fishing companies sell Nunavut turbot quota to one another.

The Conservative government does support a recommendation that Nunavut continue to control all of the 6,500-tonne turbot fishery in area 0A, off the east central coast of Baffin Island.

The Senate committee report also urged the government to build as many as six more small craft harbours in Nunavut, in addition to the one already under construction in Pangnirtung.

But the government response said there are “no immediate plans” to build more docks. Instead, the response stated “discussions continue with the Government of Nunavut regarding infrastructure needs to further support local fisheries.”

During Nunavut Tunngavik Inc.’s annual meeting in Apex last week, Jose Kusugak, president of the Kivalliq Inuit Association, called on the Government of Nunavut, NTI and the regional Inuit associations to meet next year to discuss marine infrastructure in Nunavut.