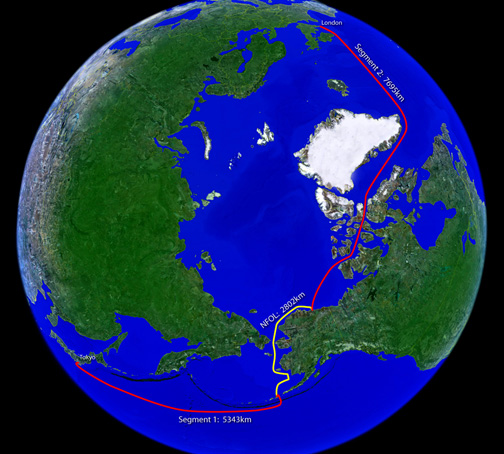 A graphic shows the route of a proposed trans-Arctic cable that would run more than 15,000 kilometres between Tokyo and London. Kodiak Kenai Cable Company says the link would cut data transmission times from Europe to Asia by almost half. (IMAGE COURTESY OF KODIAK KENAI CABLE CO.)

While everyone was wondering when Arctic oil and gas exploration would begin, the Kodiak Kenai Cable Company was making plans to lay a fibre-optic link through the Northwest Passage.

The Alaska-based company, which already has plans to build a fibre-optic network linking most of the state, now wants to build ArcticLink, a massive 15,000-kilometre, US$1.2 billion cable connecting London and Tokyo.

And it wants the route to go through the Northwest Passage, via the Parry Channel, down Baffin Bay and the Davis Strait, past southern Greenland.

Walt Ebell, the company’s chief executive officer, said the cable could slash transmission times from London to Tokyo by more than 50 per cent.

“It would be a new express route from Asia to Europe.”

Kodiak Kenai Cable Company has already built a fibre optic cable connecting Kodiak Island with Anchorage, Alaska’s largest city. The company is ready to start work on a Northern Fibre Optic Link, a 2,800-kilometre network that would encircle the entire state, from Unalaska in the southwest to Barrow and Prudhoe Bay in the North.

That network would also form the centre of ArcticLink.

Ebell said the project is possible because of decreasing ice cover during the Arctic summers.

“You need to be able to get in there with your…cable-laying vessel and you can’t do that if you’re dealing with the ice,” he said.

In 2007, Arctic summer sea ice reached its lowest level on record. In 2009, ice cover was the third-lowest ever recorded. Scientists expect the Arctic to be ice-free in the summer within decades, prompting speculation that a scramble for Arctic resources, including oil and gas, is just around the corner.

It would take two years to lay the cable and the Arctic section would have to be built in stages during the open-water season from July to August. He said he’d like to see construction start by 2011.

The company formed the Arctic Cable Company in partnership with KhaNNet, the subsidiary of a Washington, DC-based holding company. ACC will recruit investors to “finance, design, engineer, build and operate” the cable, according to a news release.

But before the project goes ahead, Ebell’s company will need federal approval from Industry Canada before the Northwest Passage segment can go ahead, according to the Telecommunications Act.

And according to federal regulations governing international submarine cables, the project would also have to clear a federal environmental assessment.

“We’ve just rolled this thing out. We recognize that we will be dealing with Canadian authorities and are looking forward to doing that,” Ebell said.

Ebell said his company has been in early discussions with Northwestel to see if that company wants to get involved in the project, which could provide an alternative to the satellite-based telecom system that covers most of the North.

Limited bandwidth means that internet speeds are much slower in Nunavut than in southern Canada. And telephone connections are sometimes scratchy and prone to interruptions.

“We would need of course participation from Canadian telephone companies, cooperation with the communities where you’d be landing and you’d need to look for funding sources to pay for those additional expenses,” he said.