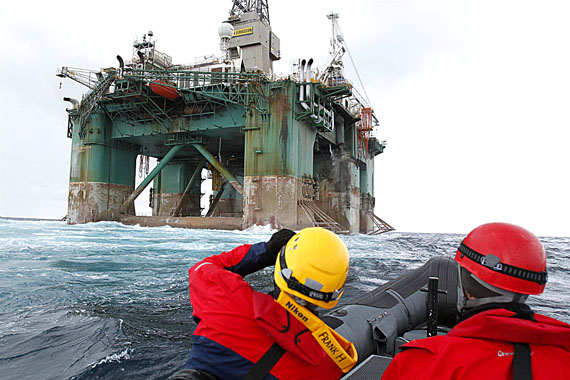 Greenpeace activists approach the Leiv Eiriksson oil rig off the west coast of Greenland May 24. The environmental organization is protesting the Arctic presence of the rig, which Cairn Energy is using to drill exploratory wells this summer. (PHOTO BY STEVE MORGAN/ GREENPEACE)

Cairn Energy formally launched its summer oil drilling program off the west coast of Greenland May 24, as the environmental group Greenpeace stepped up protests of the Scottish oil company’s Arctic activity.

Greenpeace had two ships near the 53,000-tonne Leiv Eiriksson oil rig. An activist aboard the Greenpeace ship Esperanza said an oil spill off Greenland would be “all but impossible” to clean up.

“We want this ship to get out of the Arctic,” said Ben Ayliffe, a senior oil campaigner with Greenpeace, from the Esperanza, located around 50 kilometres southwest of Nuuk.

Ayliffe said drilling in Arctic waters can’t be done safely and that a spill would devastate marine mammal populations in the Davis Strait and Baffin Bay.

He said both the oil rig and the Greenlandic government have refused to release a spill response plan to Greenpeace.

Jørn Skov Nielsen, the director of Greenland’s Bureau of Minerals and Petroleum, said Cairn’s drilling license was granted with extensive regulations based on Norway’s strict rules for drilling in the North Sea.

Nielsen said a second drill ship is always near the rig to drill a relief well in the event of a blowout, and another dozen ships laden with oil spill response equipment are circling the Leiv Eiriksson at all times.

More resources are on stand-by at all towns on Greenland’s west coast, he added.

“The overall elements of the oil spill plan have been publicized, but we don’t see any need to publicize the technical parts of it because there is a chance it wouldn’t work efficiently,” Nielsen said.

The Guardian newspaper reported May 24 that Danish commandos may be on board the Leiv Eiriksson, but did not provide a source for that information.

Ayliffe said he believes there is an armed presence on board the rig, because a helicopter has made repeated trips between the Eiriksson and a Danish warship nearby.

Ayliffe wouldn’t say if Greenpeace planned a repeat of events this past April, when protesters from the organization clambered aboard the rig as it sailed toward Greenland from a winter drilling project off Turkey.

Nielsen said Greenpeace has the right to protest Cairn’s drilling program, but must follow the law. He said there is no armed presence aboard the Leiv Eiriksson.

“There’s no soldiers, there’s no special commandos or anything on board the Leiv,” he said.

Drilling for the USD $600 million project will take place in depths of 290 to more than 1,500 metres of water.

Cairn Energy also plans as many as three seismic surveys off Greenland this summer. The company has put the odds striking oil in any of the test wells at between 10 and 20 per cent.

Greenpeace says those depths increase the likelihood of a well blowout similar to the one that caused the massive oil spill in the Gulf of Mexico last year.

And it says Arctic waters are particularly vulnerable to spills because cold water lacks oil-eating bacteria that helps control oil.

But Greenland is serious about developing its offshore oil potential as a way of reducing its financial dependence on Denmark.

Ayliffe said Greenpeace supports Greenland’s goal of independence but said an oil spill would be disastrous for hunting grounds and that any benefits from the oil industry would only arrive “many, many years into the future.”

“Betting the house on a gold rush from oil at this stage is a very risky thing to do,” he said.

But Nielsen said Greenland has every right to explore for oil within its own waters.

“It’s a coastal state’s sovereign right to… exploit their natural resources as long as they do it in accordance with international practice.”

Those concerns echo statements in Canada about the risks of Arctic oil exploration. Larry Bagnell, the former Liberal MP for Yukon, called last year for a moratorium on drilling in Arctic waters.

Officials with the Government of Nunavut and Nunavut Tunngavik Inc. worry Canada lacks the equipment and manpower to handle even minor oil spills in Nunavut waters.