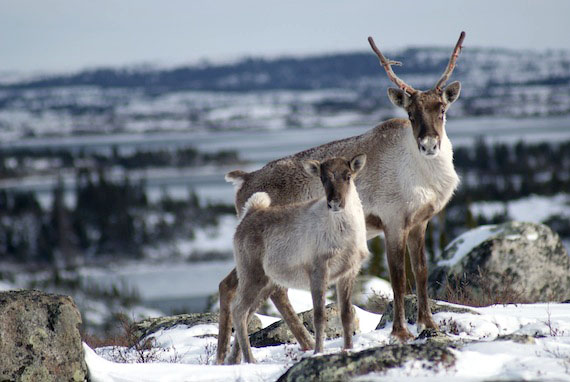 The sight of a female caribou from the Leaf River herd, standing with her calf, may become less common in Nunavik’s future. Biologists aren’t sure yet by how much this herd’s population has dropped. A survey this summer should help resolve that question. (PHOTO BY JOELLE TAILLON) 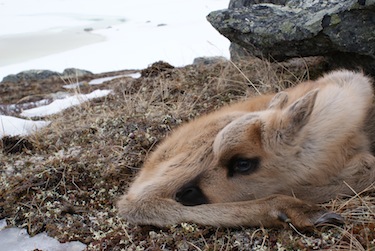 Biologists are sounding an alarm over drastic declines in the numbers and overall condition of caribou in Nunavik.

As recently as 2001, caribou numbered more than one million in Nunavik.

Now there could be fewer than 300,000 caribou in the region.

Some say the drop — as much as 80 per cent in the case of the George River herd — are just part of a natural cycle that has seen caribou populations go up and down over time.

But that argument no longer holds because new factors have come into play, says Joëlle Taillon, a graduate student at Université Laval and member of Caribou Ungava, a five-year, $1.7 million research project on Nunavik caribou.

“We’re in a different context now. We have climate change, more development, industries and more activity than we had 40 to 50 years ago,” Taillon told Nunatsiaq News.

Although studies can’t yet say exactly what is affecting caribou numbers in Nunavik, Quebec has already moved to limit the damage to the herds.

Earlier this year Quebec’s natural resources department announced cuts to the caribou sports hunt, which takes some of the 40,000 caribou hunted every year from the Leaf and George River herds.

Quebec announced a 25 per cent cut to the number of permits handed out for the Leaf Bay herd in Nunavik, shortened the hunt and limited the number of caribou that can be bagged to two caribou of either sex per hunter.

For the George River Herd, the number of sports permits were reduced by half, some areas are now closed to all hunting, and there’s a shorter hunting season.

These measures, to be reviewed next year, have already affected outfitters who plan to pool the unused portion of their allocated caribou hunting licenses to benefit other outfitters with higher client demand.

For her research, Taillon travelled to Nunavik twice a year.

In June, she examined female caribou and their calves and attached satellite collars to some females.

Then, in October, she returned to follow the herds during their annual migration.

Over the past three years, she found caribou in the Leaf River her were in poorer condition than in 2001, the date of the last major caribou survey.

She also determined that caribou changed the location of their calving grounds.

“Why do they go there? We don’t know yet,” she said, but it could be to escape predators, find more food or flee development.

The shift means the 30,000 square km of protected calving grounds, called “wildlife habitats,” no longer reflect reality because these include only 10 to 15 per cent of today’s calving grounds.

That’s something Taillon hopes will change with her recommendations to Quebec.

These include a call for a yearly adjustment to those protected areas, where there can be no activity from May to July.

The most recent survey of caribou show that the numbers of caribou have also changed — and they’re down.

The Leaf Bay herd, which numbered about 628,000 in 2001, couldn’t be surveyed in 2010 because — exceptionally — the caribous never gathered together after calving.

But, based on the poor condition of female caribou and calves— a sign of a herd’s health — Taillon also fear the Leaf Bay herd’s numbers have also plummeted.

Researchers with the Caribou Ungava program are also looking at how climate change and industrial development affect caribou in Nunavik.

A warmer climate will means more vegetation and for a longer period.

But hot weather and a later freeze-up of lakes and rivers may disrupt caribou migration routes, they fear.

Some suggest the warming climate is connected to several drownings which have been recorded over the past 30 years:

• in 1998, when a large number of large male bull caribou appear to have drowned while attempting to cross Minto Lake, 100 km northeast of Umiujaq;

• and in 2007, when more than 300 dead caribou were spotted floating down the Kuujjuaq River about 150 km south of Kuujjuaq.

As for development — it’s coming to Nunavik. As Quebec’s Plan Nord to develop Nunavik steamrolls ahead with its mines, roads and hydroelectric projects, caribou will end up surrounded by development.

“It’s good to develop and have a good economy, but it comes with a price,” Taillon said.

That price could be the health of Nunavik’s caribou herds.

Maps from a 2001 United Nations Environment Program report charted the cumulative effects of human activities in the Arctic with maps, show how road networks will expand into untouched regions.

Roads are supposed to spur on economic development, but the breeding success of animals goes down and their habitats are split up, the report said.

“Reindeer and caribou are among the most sensitive species,” says the report.

Studies show they tend to stay at least 20 km away from roads. 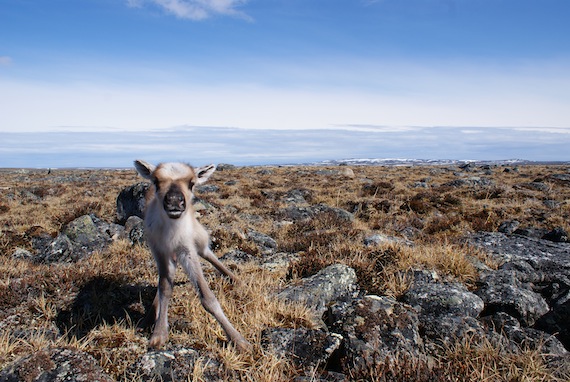 This young caribou is a member of the Leaf Bay caribou herd, which once numbered about one million animals. (PHOTO BY JOELLE TAILLON)