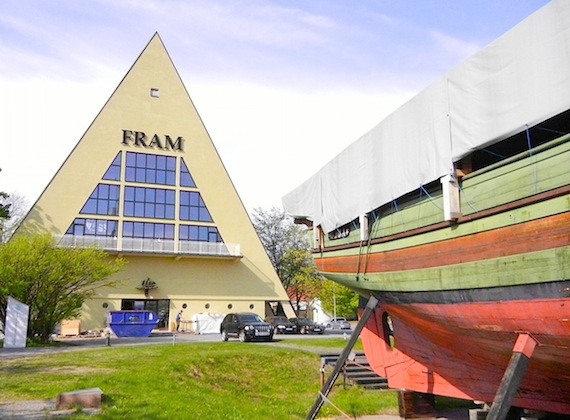 Roald Amundsen’s Gjoa, the small sloop on which he sailed through the Northwest Passage in 1905, can be found today outside the Fram Museum in Oslo, Norway. Someday the ship will be the centerpiece of a new museum dedicated to the Northwest Passage and connections between Amundsen and Netsilingmiut which helped make his expedition a success. (PHOTO BY JANE GEORGE) 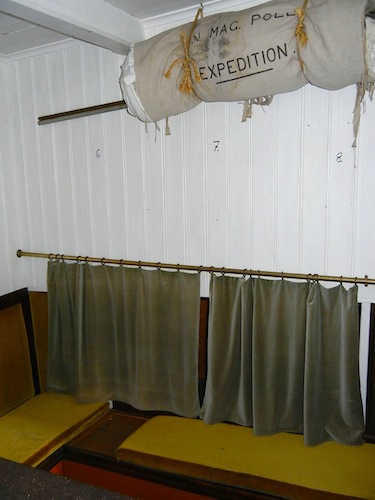 Imagine sleeping and working in this tiny space for years: that’s what Roald Amundsen and his crew did when they attempted — successfully — to sail through the Northwest Passage. (PHOTO BY JANE GEORGE) 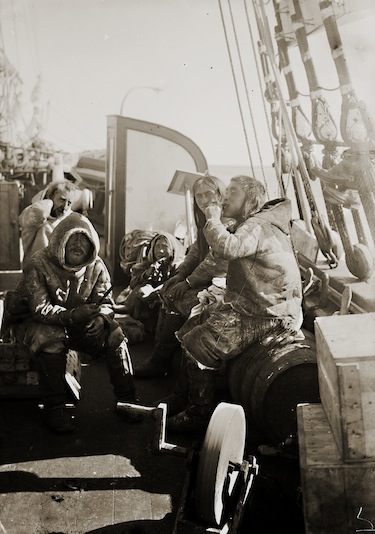 Here Roald Amundsen shares a meal with Netsilingmiut friends on the deck of the Gjoa. (PHOTO COURTESY OF THE FRAM MUSEUM)

Next September, Trina Sallerina, a teacher from Gjoa Haven, her group of young drum-dancers, and two elders from the community plan to hunker down for a night on board the Gjoa, the ship Norwegian explorer Roald Amundsen used to successfully travel through the Northwest Passage in 1905.

The 42-tonne sloop took three years to make that voyage under Amundsen’s command, two of which were spent near what is today’s Gjoa Haven.

Now, his Gjoa, which made it through the ice-choked passage with only sails and 13-horsepower motor, can be found on land, right behind the Fram Museum in Oslo.

There, its green and red hull, on which the ship’s name Gjoa is still visible, sits supported by wooden hoists and covered with a roof while it waits for a badly needed clean-up and repairs.

The planned visit by the Gjoa Haven group and their sleep-over — the first time anyone has done this since Amundsen’s time— is intended to launch the Fram Museum’s plan to build a new Northwest Passage Museum and, at the same time, build closer links with Gjoa Haven.

That first crossing was far from easy, as Amundsen related in his log:

“The spray was dashing over the ship, and the wind came in gusts, howling through the rigging… the spray and sleet were washing over the vessel, the mast trembled, and the Gjoa seemed to pull herself together for a last, final leap. She was lifted up high and flung bodily on to the bare rocks, bump, bump, with terrible force.”

During the time that Amundsen wintered over in Gjoa Haven, he and his crew of seven greeted their first Inuit visitors with the word “teima” [taima].

They became friendly with the local Netslingmiut, bartering for warm clothing, meat and artifacts, which are now found in Oslo’s ethnographic museum.

They also learned to build igloos and run a dog team over the ice.

Unlike earlier explorers like Sir John Franklin, whose attempt to travel the Northwest Passage ended in disaster, Amundsen sailed in a small ship with only a few experienced crew and carried hunting and fishing equipment.

The Gjoa was equipped with enough supplies, crammed in like books in the hull, to last for five years.

But without the local know-how, they likely wouldn’t have made it through two winters, during which they were able to travel out on the land and studying the magnetic North Pole.

Their studies, which established the position of the magnetic North Pole, at that time about 120 kilometres from Gjoa Haven, were of such precision that experts on polar magnetism based research on them for years afterwards.

Photos taken from Amunden’s stay in Gjoa Haven show Inuit coming to trade or going on board the Gjoa, sharing food and perhaps more — DNA tests are expected to show whether two Gjoa Haven men — and their descendants — were fathered by Amundsen, as their family lore suggests.

In August, 1905, the Gjoa finally resumed its course through fog and drift ice.

After three weeks they spotted a whaling ship that had set out from California: the Gjoa had successfully navigated the Northwest Passage.

As a first step in re-establishing the link between Gjoa Haven and Norway, Kløver visited the community in 2010 to celebrate the centennial of Amundsen’s crossing — five years late.

He and Norway’s deputy ambassador to Canada left a photographic exhibit on Amundsen at Gjoa Haven, a gift from the Fram Museum and the Norwegian government, and inaugurated a cairn honouring Amundsen’s crossing of the Northwest Passage.

Kløver sees the Northwest Passage Museum continuing this connection, with, among other things, a live video cam between Gjoa Haven and the museum and displays of artifacts and artwork from the community.

Kløver also wants to see the Gjoa protected. Up until 1972, the ship was displayed in San Franciso’s Golden Gate park where it quickly because a popular hang-out and shooting gallery for junkies.

Renovations and repairs are still need, a tour of the Gjoa shows.

But nothing has damaged the sense of history there: climbing down into the small quarters of Amundsen and his crew, who lived in narrow bunks and spent their days around a tiny table, gives you shivers — the same ones which the Gjoa Haven visitors are likely to feel when they’re on board the ship which many of their ancestors knew well.

After a year of fundraising sales, raffles and bingos, and a recent welcome grant of $20,000 from the Kitikmeot Inuit Association, Sallerina says carrying off the long-awaited trip to Norway looks good.

For her, it’s about sharing old memories and giving new ones to the students who have worked hard to learn their traditions and fundraise for their trip.

“It will work and I believe in it,” she says. 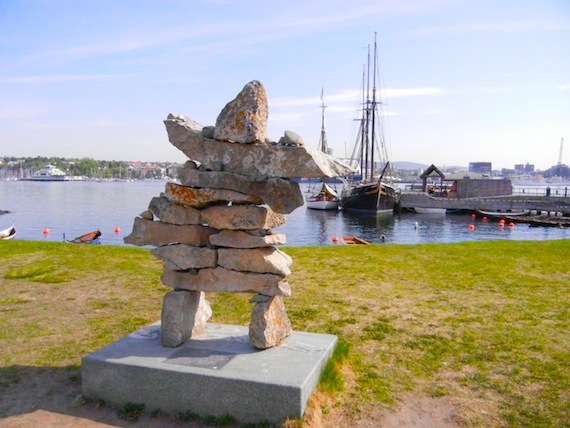 This inuksuk made in 2005 by Gjoa Haven resident Joseph Suqslak stands not far from the Gjoa in Oslo, Norway. It commemorates the “gift of friendship” between Canada and Norway on the 100th-year anniversary of Roald Amundsen’s successful voyage through the Northwest Passage. (PHOTO BY JANE GEORGE)