“The toxin is of particular concern to northern Inuit” 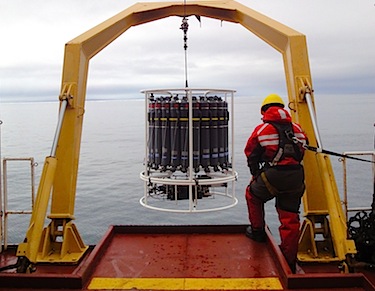 Last summer this rosette of bottles was lowered down off the side of the Amundsen research icebreaker to take water samples for researchers during its trip up the coast of Baffin Island and through the Northwest Passage. Analysis of these samples shows high levels of a potent neurotoxin called monomethylmercury. (PHOTO BY JANE GEORGE)

A University of Alberta-led research team says its findings show a relatively harmless inorganic form of the chemical mercury, found worldwide in ocean water, changes into a potent neurotoxin when it’s in seawater.

After two years of testing water samples across the Arctic Ocean, the researchers found that inorganic mercury, released from human activities like industry and coal burning power plants, undergoes a process in the water called methylation and becomes deadly monomethylmercury.

“Monomethylmercury is a neurotoxin that accumulates in marine organisms, with serious implications for human health. The toxin is of particular concern to northern Inuit peoples, for example, whose traditional diets are composed primarily of marine mammals and fish,” said U of A biological sciences PhD graduate Igor Lehnherr in a paper published this month online in Nature Geoscience.

Last August, on board the Amundsen research icebreaker, Lehnherr looked for methylmercury in the High Arctic seawater, putting cylinders down into the water in a circular metal cage called a “rosette” and then taking these up for later analysis.

Lehnherr found monomethylmercury in all the samples that he analyzed.

Monomethylmercury accumulates in organisms, meaning its toxic effects increase as it progresses through the food chain from small sea creatures to humans.

The greatest exposure for humans to monomethylmercury is through eating seafood.

Scientists believe poisonous pollutants like mercury may be released into the ocean in greater quantities as Arctic ice melts and sea temperatures rise, upping the threats to marine mammals like polar bears — and people.