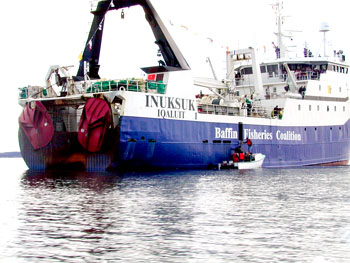 The Baffin Fisheries Coalition worries about the impact of seismic testing on its factory vessels like the Inuksuk. (FILE PHOTO)

Seismic testing in Baffin Bay and Davis Strait has the potential to cripple Nunavut’s fishing industry, says the Baffin Fisheries Coalition and the Arctic Fishery Alliance.

We are very concerned about the effects of seismic testing on fish behaviour,” said Jerry Ward, the CEO of the coalition representing nine Inuit-owned fish quota holders on Baffin Island, said in a submission to the National Energy Board about a proposal by RPS Energy to conduct a five-year seismic testing program in Baffin Bay and Davis Strait.

Before any seismic testing by RPS Energy moves ahead, the Baffin Fisheries Coalition wants to see “significant consultation” with all parties involved in Nunavut fisheries and to receive firm scientific evidence that seismic testing won’t disturb fish.

If the BFC suffers any loss of time and catch due to seismic testing, “we fully expect to be compensated for the decrease,” Ward writes.

To support these calls, the BFC’s June 1 letter, which was copied to the Department of Fisheries and Oceans, Nunavut MP Leona Aglukkaq, Senator Dennis Patterson, the Government of Nunavut and Inuit organizations, also offers a brief history of Nunavut’s emerging turbot and shrimp fisheries — “truly two of the last virgin fisheries to be developed anywhere in the world.”

Created in 2001, BFC now owns equity in its own factory trawlers; catches are improving; the fishing season lengthening due to climate change, and the range trawlers can travel has expanded northward, Ward writes.

“This is good because it means our vessels can fish longer and become more economically viable,” he says.

More than $4 million flows into Nunavut every year in the form of wages and royalties from the fishing industry off Nunavut.

“We want to make sure that nothing happens that can interfere with our harvesting efforts in these areas” is the BFC’s position.

The Arctic Fishery Alliance, made up of four hunters and trappers associations and community trusts from the Qikiqtarjuaq, Grise Fiord, Arctic Bay and Resolute Bay, says it’s also concerned about the impact of seismic testing on the operations of its 100- foot factory trawler, the Suvak.

“It is our opinion that the greater impact will be the reduced catch rates in the turbot fishery immediately following the seismic survey,” says the alliance’s June 9 letter to the NEB.

That seismic bursts cause fish to scatter, resulting in reduced catch rates: this was been well documented in Norwegian and Canadian research studies, the alliance says.

“This fact gives us sound justification for our concerns. This will be evident from a combination of lower hails to DFO or increased fishing effort in an attempt to compensate for lower catch rates,” writes Earle Hemera, manager of the Arctic Alliance.

Earle also said the seismic program could interfere with fixed fishing grear, such as gill nets, which are left in place for extended periods.

If the seismic testing program moves ahead, the alliance wants to compensation for any losses it suffers, within 60 days of notice.

But for the seismic program to proceed, the NEB must first grant authorization.

Because all the seismic testing will occur outside Canada’s 12-nautical-mile boundary, the NEB — not the Nunavut Impact Review Board — gets to decide whether to grant RPS Energy, representing oil and gas interests that authorization.