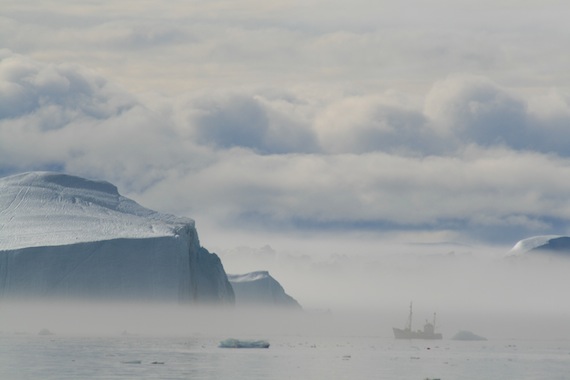 The Ilulissat Icefjord at Disko Bay in 2007. That’s the starting point of a journey that will take a research team along the migratory path of the narwhal, starting in early June. (PHOTO COURTESY OF OCEANS NORTH CANADA) 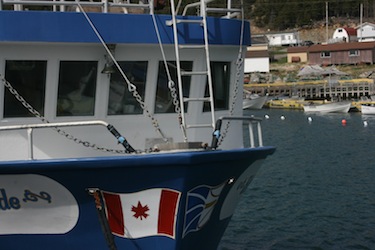 An Oceans North Canada-led expedition will travel on this crab trawler that has been converted into a research vessel and re-baptized as the Arctic Endeavour. An eight-member crew will follow the migration path of the narwhal from Disko Bay in Greenland to Nunavut’s Lancaster Sound. (PHOTO COURTESY OF OCEANS NORTH CANADA)

A team of researchers plan to go where few have gone before.

On June 3, an eight-member crew led by the Pew Environment Group’s Oceans North Canada will board a converted crab trawler in Greenland’s Disko Bay en route to Nunavut’s Lancaster Sound.

From the deck of the 45-foot Arctic Endeavour, the crew will follow the annual migration of the narwhal, the tusked Arctic whales that have already started to migrate out of their wintering grounds in central Baffin Bay.

“To our knowledge, no boat this size has ever tried to cross the [North Water polynya]) and go into Lancaster Sound this early in the season,” said Chris Debicki, the Nunavut director of Oceans North Canada.

The North Water polynya is the open channel of water between the coasts of Greenland and Nunavut.

The voyage includes two marine biologists and a Pond Inlet hunter who will collect data about Arctic whales and seabirds, local plankton and the salinity of the water.

But its plan to follow the narwhals’ spring migration makes this journey unique. The only other ships that navigate that area at this time of year are icebreakers, which are too large and noisy to observe marine wildlife, Debicki said.

About 85 per cent of the world’s 80,000 narwhals pass through Lancaster Sound in late spring en route to other bays and inlets, Debicki said.

Inuit, who have harvested narwhals for hundreds of years, know that these whales winter in Davis Strait. Everyone awaits their return to the High Arctic in the spring.

But Debicki said there are still gaps in knowledge of narwhals.

“We’re trying to fill in research gaps on some of these species with the view of protecting them from outside risks,” he said, naming climate change, industrial development and increased sea traffic as a few of those risks.

“Our position hasn’t changed that Inuit harvest of sea animals is part of conservation — not a threat to it,” he said. “We would never do anything to undermine that.”

The Arctic Endeavour voyage also hopes to draw attention to Lancaster Sound, an area the group wants to see protected.

Ottawa has also said that the 45,000 square kilometre territory would also be off-limits to seismic testing and oil exploration.

“We’re very much in support of those decisions,” Debicki said. “However, the boundaries only protect a portion of the animals’ habitat.

“We think by filling in the research gaps… we’re in a better position to ensure any development takes into account this critical migration.”

From a nutrition perspective, Debicki said it’s just as critical that Inuit communities can continue harvesting these animals.

Lancaster Sound, at the eastern entrance to the Northwest Passage, is one of the most biologically rich areas of the Arctic.

Apart from narwhals, thousands of beluga and bowhead whales, seals and seabirds travel through the area every year.

Last month, a report released by the International Union for Conservation of Nature and the Natural Resources Defense Council named Lancaster Sound as one of the richest and most vulnerable places in the Arctic Ocean, alongside the North Water polyna and Disko Bay.

The report called for those and other Arctic regions to be protected.