“There seems to have been a lot of misunderstanding” 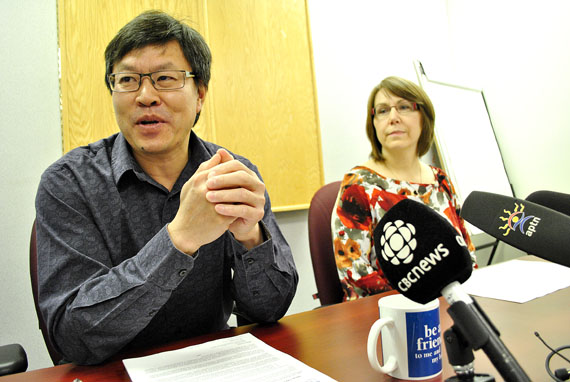 Peter Ma, the GN’s deputy minister of health and social services, and Alana Froese, the GN’s director of pharmacy, defended their changing approach to pharmaceutical services in Nunavut, including the development of a telepharmacy system. (PHOTO BY JIM BELL)

Nunavut government officials defended their controversial telepharmacy plans at a July 29 press conference in Iqaluit, saying their new approach increases interaction between patients and pharmacists and does not threaten Inuit-owned pharmacies in Cambridge Bay and Rankin Inlet.

“There seems to have been a lot of misunderstanding about what we’re actually proposing to do and what’s about to happen,” Peter Ma, the deputy minister of the health and social services department, told reporters.

Under the new approach, the Government of Nunavut is doing two things:

• changing its former contracts with Nunavut-based pharmacies for internal, hospital-based pharmacy services; and

• talking to existing retail pharmacies about “future concepts” for telepharmacy.

The term “telepharmacy” means the use of electronic technologies like videoconferencing, telephone and fax to bring pharmacists together with patients and health workers in remote communities.

“When we talk about future concepts of telepharmacy for retail providers, what we’re talking about is having someone like Sakku, or Kitnuna, or perhaps Valupharm or Northmart, being the central telepharmacy location, which would then connect in with their remote locations,” Alana Froese, the GN’s director of pharmacy, told reporters.

These plans, however, have alarmed some existing retail pharmacists in Nunavut.

This past February, Brooke Fulmer, a former director of pharmacy with the GN and the pharmacist at Kitnuna’s pharmacy in Cambridge, said the GN’s approach is a “step backward.”

In his view, the new approach would dilute the quality of care and disrupt the seamless relationship that pharmacists like him enjoy with their patients.

The Nunavut Pharmacists Association told Nunavut Premier Eva Aariak earlier this year that the plan marks a “low point in pharmacy in Nunavut.”

The GN’s plan also runs against what other jurisdictions in Canada are trying to do, according to the executive director of the Ottawa-based Canadian Pharmacists Association.

• the provision of more drug information to health care providers and patients;

In 2010, the GN contracted with Ottawa Valley Regional Drug Information Services, part of the Ottawa health system, to provide telepharmacy service to the Qikiqtani General Hospital.

Under that contract, the Ottawa group will also help Froese develop a drug formulary for Nunavut and other policies and procedures.

At the same time, the GN ended its contract with Valupharm Drugs of Iqaluit.

This, and other aspects of the new plan, has led Inuit-owned retail pharmacies in Cambridge Bay and Rankin Inlet to fear that their contracts might also be in jeopardy at some point in the future.

Earlier this year, Nunavut Tunngavik Inc. passed a motion opposing the plan, on the grounds that the GN may be breaching its obligations under Article 24 of the Nunavut land claims agreement.

Froese said, however, that the GN has extended its contract with Sakku until 2012, with amended terms to provide for the four patient service improvements the GN wishes to deliver.

The Kitnuna contract expires Oct. 31, 2011. Froese said the GN will soon issue an RFP that will see the contract put out to competition.

Froese said the North West Co. made a proposal to the GN under the RFP call eventually won by the Ottawa group.

She also said North West Co. has also approached the GN to talk about “other models of delivery” and that this is “something we could keep in mind for the future.”

But she also said the GN’s renewed contract with Sakku demonstrates that the territorial government is not trying to eliminate local retail pharmacies in Nunavut.

“We know that the success we see in Sakku, we can realize also in Cambridge Bay,” Froese said.

One goal of expanded telepharmacy, Froese said, is to make medication available to patients at the time it’s dispensed.

After that, the nurse would then prepare the prescription, put the label on it, and provide the patient with advice, Froese said.

Under this system, retail pharmacists would act as the hub for a future telepharmacy distribution and information system, she said.

She also said, however, that Nunavut must bring in new regulations to mandate the counselling of patients by pharmacists, which exists everywhere else in Canada but not in Nunavut.