“I hope the Arctic will always showcase our ability to work together, not create new divisions” 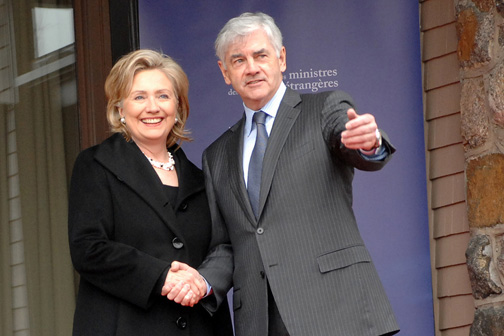 Foreign affairs minister Lawrence Cannon shakes hands with Hilary Clinton, the US seceretary of state, before the start of a meeting of Arctic foreign ministers in Chelsea, Quebec March 29. Clinton slammed Canada for leaving countries like Iceland and Sweden, plus aboriginal leaders out of the meeting. (PHOTO COURTESY OF DFAIT)

Foreign ministers from five Arctic countries met in Chelsea, Quebec this past week, but what got the most attention wasn’t the meeting’s agenda, but the guest list.

The meeting of foreign ministers from Canada, the United States, Russia, Denmark and Norway was already under fire from some aboriginal leaders for excluding them, and Arctic Council members Sweden, Finland and Iceland.

Things got worse for the host, Foreign Affairs Minister Lawrence Cannon, when Hilary Clinton, the US Secretary of State, criticized Canada for holding the meeting outside the Arctic Council.

“Significant international discussions on Arctic issues should include those who have legitimate interests in the region,” Clinton said, “and I hope the Arctic will always showcase our ability to work together, not create new divisions.”

“What happens in the Arctic will have broad consequences for the earth and its climate. The melting of sea ice, glaciers, and permafrost will affect people and ecosystems around the world,” she said, “and understanding how these changes fit together is a task that demands international co-operation.”

In a statement, Cannon said the five foreign ministers agreed to implement existing Arctic Council agreements on search and rescue and petroleum development. The countries also pledged to work together on research into climate change and polar fish stocks, and to implement mandatory Arctic shipping rules through the International Maritime Organization.

They also reiterated a claim, made at a 2008 meeting of the same five countires in Ilulissat, Greenland, that the Arctic coastal states will follow international law when claiming undersea Arctic territory.

But that has led critics to deride Monday’s meeting as a case of divvying up Arctic resources behind closed doors. And some environmental groups are calling on the five countries to leave potentially trillions of dollars worth of oil and gas where it is.

Cannon told reporters the “unique” position of the five countries on the Arctic seacoast justified a separate meeting because “Arctic Ocean coastal states will be most directly affected by new public safety challenges” and other issues, such as fisheries management, arising in an era of rapidly retreating ice cover.

“Arctic Ocean coastal states have an important stewardship role in the region,” he said.

But Duane Smith, president of the Inuit Circumpolar Council (Canada), accused Cannon of shutting down the Arctic Council the way the Conservative government prorogued Parliament over Christmas.

“He prorogued the Arctic Council and essentially shut down meaningful dialogue on the whole Arctic”, Smith said in a news release.

While aboriginal groups weren’t invited to the Arctic Five table, the three territorial premiers do sit on an Arctic advisory council chaired by the foreign affairs minister.

Nunavut Premier Eva Aariak, who took part in a conference call with Cannon during the lead-up to the summit, said she just wants to ensure Inuit have input on Arctic development decisions.

“I can understand why people are saying we [Inuit] should be involved. I agree,” she said.

Rob Huebert, a political science professor at the University of Calgary, said this week’s debacle ought to be the end of the so-called Arctic Five. Future talks should happen under the Arctic Council, he said.

But Huebert added that the US has traditionally tried to limit the scope of the Arctic Council. The first Arctic Five meeting was held in Ilulissat in 2008 to talk about Arctic territorial claims that were being held up because the US still hasn’t signed the United Nations Convention on the Law of the Sea.

“There’s room for both sides to be a little embarrassed,” Huebert told Nunatsiaq News.

“The reason why the Arctic Council is not a more powerful body…is because the Americans are the ones that are always holding back anybody’s proposal to actually give it a more powerful role.”

Huebert said Canada should “make lemonade out of a lemon” by pushing the US to return to an active role at the Arctic Council. That’s also in the interest of Inuit, Huebert said, because Inuit, along with other circumpolar aboriginal groups are empowered with permanent observer status at the council.

Greenland Premier Kuupik Kleist, who attended as part of the Danish delegation, acknowledged there were “undercurrents” of tension between the participating ministers. But he said Clinton’s comments are sure to be welcomed by northern aboriginal leaders and the three excluded Arctic Council countries.

“I certainly agree with the Secretary Clinton on her remarks about the indigenous peoples and the need for their involvement in such a serious process concerning the Arctic area’s future,” Kleist told Canwest News Service in an interview.

APTN reported March 30 that Canada initially opposed Greenland’s seat at the table in Chelsea. Citing unnamed sources, APTN said the inclusion of self-governing Greenland in the Danish delegation irked Ottawa because Quebec in the past has demanded its own seat at some international meetings.

With a report from Randy Boswell and Juliet O’Neill, Canwest News Service