Park visit the trip of a lifetime uide Noah Annahatak hunts ptarmigan in the canyon that houses the Puvirnituq River within Pingualuit park. (PHOTO BY SARAH ROGERS) More than 200 people, including this young visitor, have stayed at the Parc national des Pingualuit since it opened in November 2007. (PHOTO BY DAVID BENOIT) 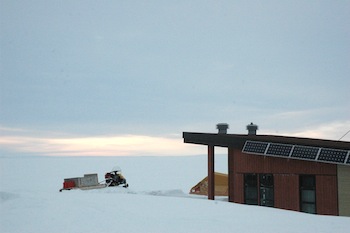 One of Pingualuit’s modern and solar-powered cabins can sleep eight people. (PHOTO BY SARAH ROGERS)

KANGIQSUJUAQ — When Gordon Launchbury’s daughter invited him to visit her in Kangiqsujuaq, he thought all of his travel dreams had come true.

So when he arrived and realized she’d also planned a trip to Parc national des Pingualuit, it was the icing on the cake.

The retired 64-year-old from Orillia, Ont. spent three of the most enjoyable weeks of his life in the village where his daughter teaches and its adjacent provincial park, snapping photos, eating seal meat and learning to carve soapstone.

And Pingualuit in particular exceeded his expectations. Launchbury spent much of his trip to the crater outdoors, camera in tow, where he got photos of a lemming and an Arctic fox.

“I thought it would be kind of sterile, you know, ice and snow and sky, but there was lots to see,” he said. “I’ve stayed in many places but this was really nice.”

Now, back home in Orillia, Launchbury has given a talk to his church about his northern adventure and he’s been invited to speak to his son’s fishing club.

Launchbury is one of a small but growing group of visitors that have been lured to the region since Pingualuit officially opened in November 2007.

Since then, more than 200 tourists have come to stay at the region’s first park and overnight in its cozy cabins, while hundreds more have visited Pingualuit’s interpretation centre in Kangiqsujuaq.

There’s even been an increase in visitors this spring, said Pingualuit’s Nathalie Girard – about 80 overnight guests so far in 2010.

Most come from Quebec, Girard said, but that could change soon. That’s because the park is being promoted to travel operators across Canada and the world, with hopes to entice their customers to the north.

In almost three years, the park experience has grown beyond the must-see visit to Pingualuit’s namesake crater.

While that remains a strong focal point, visitors to the park can also kayak, fish, bird watch, dog-sled, cross-country ski or spend the night in an igloo.

Girard and her staff have also built a library and reference room at the interpretation centre, full of films, photographs and other background on Pingualuit.

But Girard — the only non-Inuk staff member at the park — said one of the park’s strongest selling points is the Inuit experience visitors can enjoy, through the eyes of Pingualuit’s local guides.

“The staff are proud of their roots and of their land,” Girard said. “Someone who shows an interest has the chance to have a really rewarding trip in their company.”

Yaaka Jaaka is a former park warden who still guides occasional trips to the park. He can answer just about any question about the birds, plants and even mushrooms that live within park boundaries.

Through his work, Jaaka has gradually become knowledgeable about a place that was mostly mythical to him as a child.

“As I child I was told that there was a place called Pingualuit which was a strange, round lake and that it was a good area to trap for foxes,” he said. “The area is a traditional hunting ground because there are ancient camping sites all around the park area.”

It’s a great place to visit, Jaaka said, but in reality, few get to actually experience Pingualuit because of the high cost to travel to the region.

He’s pleased, at least, to see so many regional groups – like school groups and Rangers – visiting the park this year.

A group of secondary students from Kuujjuaq visited Pingualuit in the spring with help from the Ungaluk crime prevention program.

Their teacher Lucas Brown said that many of his students were surprised at how much they enjoyed their trip.

Brown heard comments from his students such as: “It’s been a long time since I went this long without smoking weed,” and “That was the first time I ever slept in an igloo.”

“Each of the students learned something about their own culture from this trip,” Brown said.