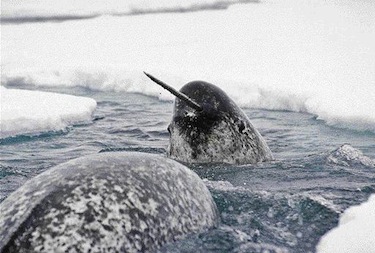 Scientists trying to measure the impact of climate change in Baffin Bay have employed narwhals as research assistants to gather temperature data from the icy depths.(PHOTO BY GLENN WILLIAMS)

Scientists trying to measure the impact of climate change in Baffin Bay have employed narwhals as research assistants to gather temperature data from the icy depths.

The use of the animals as “biological oceanographers” has shown that waters in this key habitat for the tusked whale are warming faster than previous climatology data had suggested. The researchers from the University of Washington and the Greenland Institute of Natural Resources attached tags with satellite-readable temperature sensors onto the narwhals and then recorded transmitted data as they swam and dove in the iceberg-choked bay.

“Narwhals proved to be highly efficient and cost-effective ‘biological oceanographers,’ providing wintertime data to fill gaps in our understanding of this important ocean area,” lead researcher Kristin Laidre said in a summary of the study, which was published in the latest issue of the Journal of Geophysical Research — Oceans.

“Their natural behaviour makes them ideal for obtaining ocean temperatures during repetitive deep vertical dives,” she added. “This mission was a ‘proof-of-concept’ that narwhal-obtained data can be used to make large-scale hydrographic surveys in Baffin Bay and to extend the coverage of a historical database into the poorly sampled winter season.”

In some cases, the whales dove to depths of more than 1,700 metres in pursuit of food, providing scientists with superb data about changing temperature levels throughout the water column.

The scientists said ice cover in Baffin Bay can make direct monitoring by human researchers difficult, dangerous and expensive at various times of the year.

The area east of Ellesmere Island, where icebergs from Greenland’s glaciers are regularly flushed south along Canada’s Arctic coast and eventually into the Atlantic Ocean off Newfoundland and Labrador, is considered a prime feeding and breeding area for narwhals.

The species is widely viewed as one of the northern hemisphere’s most vulnerable creatures in an age of rapid climate change.

In 2008, a major international study identified the narwhal as the species most susceptible to impacts from the retreat and thinning of Arctic sea ice because of its reliance on specific ice conditions for various behaviours and its specialization in feeding on halibut.

Last month, another team of U.S. scientists published a study warning that the ongoing disintegration of Arctic sea ice cover is posing a particular hazard for the species, which has an estimated global population of 80,000.

That study calculated that narwhals must surface for air at least every 1.4 kilometres, meaning whole pods of whales could drown if they swim too far out beneath large ice floes increasingly released from ice shelves and glaciers in the warming Arctic.

The risk of drowning faced by narwhals was vividly demonstrated in November 2008 when about 600 whales died in Nunavut after becoming trapped by ice in a bay near Pond Inlet.

While changing ice conditions are widely seen as a major threat to the species, Canadian researchers provided some good news about narwhal numbers earlier this year.

Using a new method of estimating the whale’s population size in eastern Canadian waters, the scientists concluded that previous counts suggesting narwhals numbered about 30,000 around Baffin Island were far too low.

Instead, they found, the population is probably closer to 60,000.