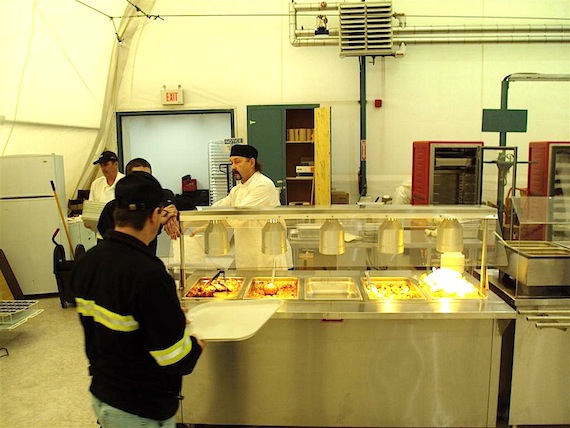 Since March 31, a new $1 million temporary kitchen at the Meadowbank gold mine near Baker Lake has been in full operation, serving three meals a day. The mine site’s former kitchen burned to the ground on March 10. (PHOTO/ AGNICO-EAGLE) 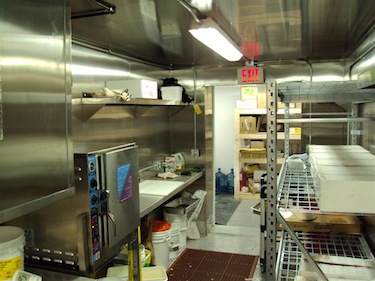 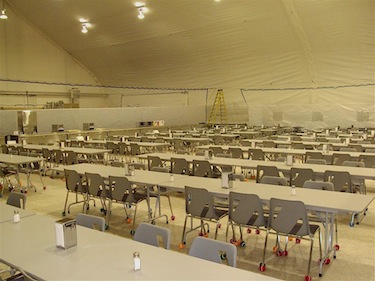 Workers at Agnico-Eagle’s Meadowbank gold mine near Baker Lake now eat in the mine site’s gym following the March 10 fire which took out the kitchen, cafeteria and a few adjacent offices. (PHOTO/ AGNICO-EAGLE)

Damage from the March 10 kitchen fire that knocked out Agnico-Eagle’s Meadowbank gold mine’s kitchen and cafeteria now has a pricetag: about $18 million.

Ebe Scherkus, the president and chief operating officer of Agnico-Eagle, told Nunatsiaq News this estimate is based on preliminary reconstruction costs of $13 million, $4 million in salaries and wages for more than two weeks for about 300 workers who were evacuated, and $1 million for a temporary kitchen.

“This does not take into account lost production or delayed development during this period,” Scherkus said. “As a result we have had to lower our production guidance and will be facing higher unit costs per ounce.”

Last week, Agnico-Eagle announced the mine was obliged to process low-grade ore from reserves.

Agnico-Eagle had previously said that its Meadowbank mine would produce about 360,000 ounces of gold in 2011, at a production cost of about $600 per ounce.

Agnico-Eagle now expects its gold production at Meadowbank to reach about 310,000 ounces by the end of the year.

The situation is also expected to improve from April to the end of June, as full mining operations in the pit resume and less low grade stockpiled material is processed, a March 28 news release said.

Agnico-Eagle has also now looked at how the devastating fire occured.

That chain of events is based on site interviews with kitchen staff, maintenance staff and “anyone else who was present prior and during the fire,” Scherkus said.

“Because the kitchen was bulldozed and torn away from the main camp, preventing the spread of the fire to the dormitories, we were unable to investigate in detail and therefore the cause is a reconstruction of events,” Scherkus said.

But here is what Agnico-Eagle has learned:

The water line was frozen under the kitchen in the general vicinity where smoke was first observed on the morning of March 10.

An electrician said he had been sent to inspect the line. He found it frozen and that the heat trace element was defective, but he was not able to complete the repairs that day.

When he returned to complete repairs, he noticed a wolverine under the kitchen.

“For obvious reasons repairs were not completed,” Scherkus said.

Smoke was first noted coming up through the floor in the kitchen at 3:45 a.m. on the morning of March 10, he said.

Staff went outside and opened up the skirting around the building, but this provided additional oxygen and the fire became uncontrollable, Scherkus said.

“[The] decision made to remove the burning kitchen, dining room facility from the dormitories ended up being the right decision,” he said.

A complete temporary kitchen arrived at the mine site on March 24, and since March 31, kitchen staff have begun serving three meals a day there.

Part of the gym serves as a temporary dining room.

A new permanent kitchen is slated to arrive with next summer’s resupply.

“Mine staff did a tremendous job fighting the fire, evacuation of personnel and restoring the operation and are to be commended for their reaction,” Scherkus said.