Paul Parsons will run for mayor’s job in Kuujjuaq 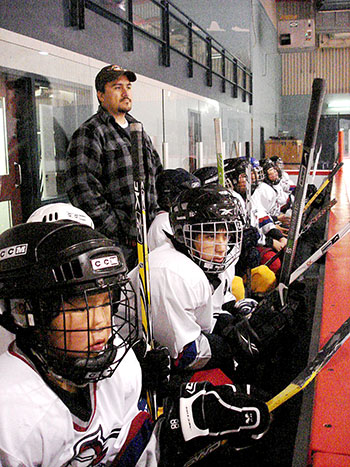 Paul Parsons, shown here with hockey players at the Kuujjuaq Forum, is the only mayoral candidate in Kuujjuaq so far. If there are no other candidates nominated by Oct. 28, Parsons will be acclaimed as mayor of Nunavik’s largest community on Nov. 4, when municipal elections will be held throughout the region. (FILE PHOTO)

This much is certain: the leadership of Nunavik’s largest community will change after the region’s municipal elections, which will be held Nov. 4.

Kuujjuaq mayor Larry Watt has said he will not seek another term in office.

However, who will replace Watt will not be certain until after nominations for Kuujjuaq’s top job as well as its six-member council close Oct. 28, said Ian Robertson, the town’s secretary treasurer and its chief returning officer.

But, with Watt out of the race, at least one candidate has stepped forward to replace him.

Long-time council member Paul Parsons says his three terms on municipal council have put him in touch with the needs of Kuujjuaq.

“I have a great deal of respect for what the position (of mayor) holds,” Parson told Nunatsiaq News, “and people have gained a trust in me in the years I’ve been here.”

A native of Kuujjuaq, Parsons has worked at Kuujjuamiut Inc. for the past two years as their personal loans manager. He has sat as a representative on the Kativik Regional Government regional council and as president of the Kuujjuaq Minor Hockey Association.

But, until his candidacy is made official Oct. 28, Parsons remains tight-lipped about his plans for the municipality.

“I’d rather have the time to campaign to my fellow community members now,” Parsons said. “They know who I am and they know where I’m coming from.”

“I want to diversify my work experience,” Watt said. “I was fortunate enough to do my college and university so now I want to expand my (skills).”

Looking back over his two terms, Watt said he is most proud about starting a justice committee in 2006.

Wheels have also been set in motion for a future council to develop a wellness centre to offer prevention programs to the public, Watt said.

But his dream to add a library to Kuujjuaq’s landscape became impossible when lack of space became too large a stumbling block to advance the project.

Those elected or acclaimed in Nunavik this year will have more time to carry out municipal projects because their mandate has been increased to three years from two, as is the case elsewhere in Quebec.

“That’s to fit with southern mandates, we found two years to be a bit short,” said Robertson. “The councillors who are newly elected are just learning the system.”

The secretary treasurers in Nunavik’s villages also serve as their chief returning officers and are responsible for verifying candidate eligibility after the nomination period has closed.

Although Watt and the current six-member council were acclaimed in 2007, Robertson said that is not typical of local elections. Names tend to trickle on to the nomination list in the final days leading up to the deadline, he said.

The municipality sent out trilingual election notices to the community’s 1,400 eligible electors, and if this year follows those previous, Robertson expects anywhere from 40 to 60 per cent of the population to cast a ballot.

Advance polls will be held across the region, as needed, on Nov. 1 and 2, while Nov. 4 is election day in Nunavik.