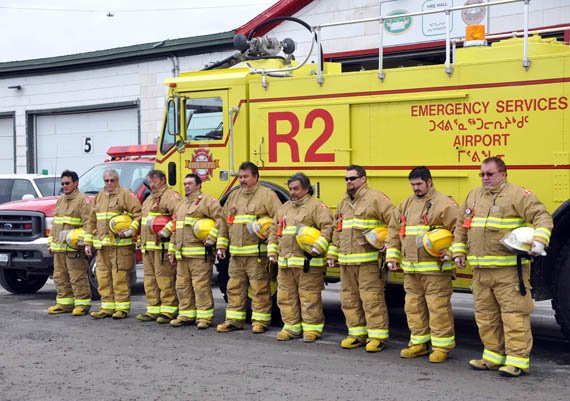 Kuujjuaq firefighters gather at the Nunavik community’s fire hall Sept. 11 for a moment of silence to mark the 15th anniversary of 9/11. Municipal officials and first responders in Kuujjuaq recall that morning, 15 years ago, when they received notification that air traffic could be grounded in Kuujjuaq, forcing many of the community’s emergency services on standby. (PHOTO BY SARAH ROGERS)

Dr. Christine Egan, 55, a nurse who spent many years in Nunavut, died Sept. 11, 2001, while visiting her brother Michael, 51, who was working in an office high up in the South Tower of the World Trade Centre. In the late 1960s and early 1970s, she worked in Pond Inlet, where this photo was taken. A scholarship founded in her memory continues to help aspiring Nunavut nurses.(FILE PHOTO)

The terrorist attacks of Sept. 11, 2001 in the United States—which killed roughly 3,000 at New York City’s World Trade Center, the Pentagon and on hijacked aircraft—continue to affect people throughout Nunavut and Nunavik.

Fifteen years after 9/11, many communities’ emergency responders still gather for a silent commemoration marking the time when the World Trade Centre’s South Tower collapsed at 9:59 a.m. and 10:28 a.m. when the North Tower collapsed.

Passengers who fly regularly to and from the North also feel the lasting impact of 9/11 on air travel: They must travel under much more rigid rules which include requirements for photo identification and pre-boarding screening.

At the municipal level, 9/11 let “the average person be more appreciative and understanding of the key role emergency workers play in emergency situations,” said Craig Lingard of the Kativik Regional Government’s public security department on the 10th anniversary of 9-11.

And since 9/11, four Nunavik communities—Kuujjuaq among them—have been equipped with enough supplies to relocate 2,000 people.

On 9/11 many from Nunavuit and Nunavik recalled on social media where they had been that day: Several in Nunavik were attending a throat singing conference in Puvirnituq while some had just taken off on flights heading north when the attacks took place. One man, then a boy, who had arrived late at his school, only to be told he should go home, not realizing what was underway. Others said they went to pray.

Nursing students—and friends— in Nunavut continue to remember Dr. Christine Egan, a longtime nurse in Nunavut, who died at the Word Trade Centre.

@NunatsiaqNews She was my good friend. Helped deliver one of my boys.

Egan, 55, died Sept. 11, 2001, while visiting her brother Michael, 51, who was working in an office high up in the South Tower of the World Trade Centre when it was hit by a jet aircraft and later collapsed into a huge cloud of dust and debris.

Today, the memory of Egan, better known as “Dr. Christine” and a woman who loved life, lives on among her many friends and aspiring Inuit nurses she continues to help in Nunavut through a scholarship established in her name.

In 2015, these recipients included Marvis Ell, Melynda Minilgak and Mishael Gordon, who received scholarships from a fund set up in 2004 by Egan’s family, friends, and estate at the University of Manitoba to provide scholarship support to promising Nunavut nursing students.

In 2001, the terrorist attacks in the U.S. immediately sent aftershocks shuddering through Nunavut and Nunavik.

Hundreds of Arctic travellers were grounded after the suspension of all Canadian air traffic—a move meant to prevent further hijackings.

On Sept. 11, emergency co-ordinators in Iqaluit scrambled to prepare for the arrival of international flights being diverted to Canada from their original U.S. destinations.

Though Iqaluit was at first expecting up to 15 trans-Atlantic jets and 3,000 passengers, the planes were accommodated at southern airports and none came to Nunavut.

Municipal and territorial leaders were grim: “It’s a day, certainly, that we won’t forget for a lifetime,” said John Matthews, Iqaluit’s mayor in 2001.

The attacks also affected Nunavummiut outside the territory. In Toronto, the Sept. 11 scheduled première of Atanarjuat at the Toronto International Film Festival was put on hold when the day’s festival activities were cancelled.

The events in the U.S. also reverberated through Nunavik, grounding planes and passengers throughout the region and setting emergency services into action.

Emergency-services officials in Kuujjuaq scrambled to accommodate the possible arrival of Boeing 747s—the largest aircraft able to land in the community.

Police and firefighters in Kuujjuaq set up hundreds of cots at the Kuujjuaq Forum in case plane-loads of passengers arrived. These cots, which had recently arrived with the sealift, were intended for emergency situations, such as the avalanche that devastated Kangiqsualujjuaq in 1999.

An emergency centre was also set up at the airport, and all medical staff at Kuujjuaq’s Tulattavik Hospital were placed on standby.

George Berthe, then the chairman of Air Inuit, went on the radio to explain to Nunavimmiut why all Air Inuit’s planes were grounded.

“People were saying, ‘How could something in New York City affect someone in Salluit who needs to have an X-ray in Purvirnituq?’” Berthe told Nunatsiaq News at the time. “But it’s such a serious event I think everyone is going to be understanding.”

Berthe also visited outfitters in Kuujjuaq whose clients from the South were stranded in the community: Almost all the 50 or so caribou hunters were Americans.

Hunters due to leave Kuujjuaq Sept. 11 sat around all day at the lounge of the Auberge Kuujjuaq lnn, wishing they had even more news on what was going on in their home country.

The events of 9/11 would affect the sports hunting industry in Nunavik, with many Americans forgoing travel north for years.