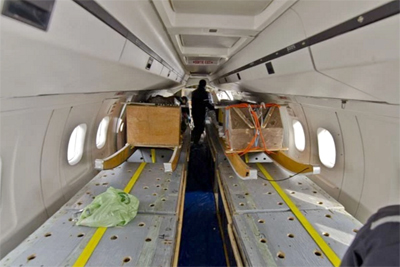 All 12 musher teams and 140 sled dogs participating in the 2016 edition Ivakkak travelled to Quaqtaq in this specially-rigged Air Inuit Dash-8, configured to carry dogs and qamutiks. (PHOTO BY PIERRE DUNNIGAN/IVAKKAK) 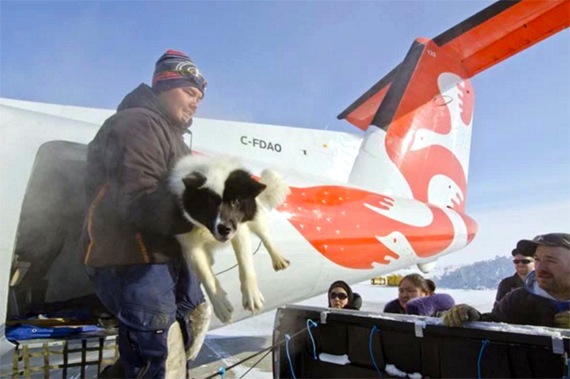 A musher offloads his sled dogs from an Air Inuit Dash-8 March 29 in Quaqtaq, where 12 dog sled teams will set off on the 15th edition of Ivakkak, Nunavik’s dog sled race. (PHOTO BY PIERRE DUNNIGAN/IVAKKAK)

Every time a plane flies overhead this week, the people of Quaqtaq hear a long and loud howl.

That’s the sound of dozens of sled dog tethered around the Nunavik community, welcoming their competitors as they arrive by plane.

All 12 teams and 140 dogs participating in the 2016 edition of the Ivakkak dog team race had arrived March 30 via a specially-rigged Dash 8, configured to carry dogs and qamutiks. The teams are preparing to set out early March 31 on Nunavik’s annual dog sled race.

‘Everyone has arrived in good shape, and spirits are high,” said Jonathan Epoo, an Ivakkak race marshall, from Quaqtaq March 30. “It’s all running according to plan.”

Environment Canada has forecast a mix of sun and cloud and light winds in Quaqtaq March 31.

This year’s route will head south along the Ungava coast, stopping in the communities of Kangirsuk, Tasiujaq and Aupaluk, before heading to the finish line in Kuujjuaq.

Epoo expects the teams to arrive April 1 in Kangirsuk. The entire race should take roughly 13 days, although that depends largely on the weather.

Puvirnituq mushers are the ones to beat in 2016; of the 12 teams participating this year, four are from the Hudson coast community. Three of them finished first, second and third in Ivakkak 2015.

Kuujjuaq sent three teams to this year’s race, including other past Ivakkak winners, mushers Allen Gordon and Junior May.

Ivakkak is hosting two other teams from both Quaqtaq and Tasiujaq, and one team from Kangiqsujuaq.

It’s an all-men’s race in 2016, and four of the participating teams include fathers and sons.

“We especially wish to thank those dog team owners of Nunavik who must not only train and prepare their dogs for this amazing race, but they also have to feed and look after them throughout the whole year,” said Andy Moorhouse, vice president of economic development at Makivik Corp., which co-ordinates the race each year.

“Dog team ownership has been an important aspect of the Inuit way of life passed down from our ancestors, and thanks to Ivakkak, it has been revitalized and celebrated.”

The first Ivakkak was launched by Makivik in 2001 to help encourage Nunavimmiut to carry on with their dog sledding tradition, a practice that was nearly lost following the killing of Inuit dogs in the 1950s and 1960s.