Cape Dyer clean-up should be complete by September 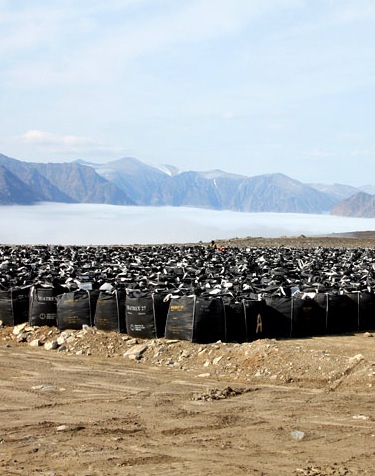 The cleanup continues along the former Distant Early Warning line sites this summer, with work set to start again next month at Cape Dyer and Cape Hooper in Nunavut.

The clean-up at two sites, known as Dye Main and Fox-4, will include the demolishing of buildings, removal of debris, contaminant clean-up, and closing of landfills.

In short, these are big jobs, which will mark the end of the federal DEW line clean-up effort that began in the early 1990s.

But the clean-up of the largest and final site, Dye-main site located at Cape Dyer, under Qikiqtaaluk Logistics Inc., a subsidiary of Qikiqtaaluk Corp., will continue in 2013.

“There is much work left to do this year such as excavation of contaminated soil, debris collection, building demolition, granular material production, regrading of disturbed borrow areas and repackaging and transporting [hazardous materials]to the beach area to be sent down south on sealift.”

Qikiqtaaluk Logistics plans to finish all the work by mid- to late August and then prepare all the camp, supplies and equipment to be shipped out by sealift.

“We’re expecting to be totally done at the end of September,” Godin said.

Another company will also finish work this summer at Cape Hooper, or Fox-4, the first DEW line site which was cleaned up.

But that site still requires some maintenance to bring it up to the same standard as the other sites, a Department of National Defence spokesperson said.

In 2012, Qikiqtaaluk Logistics was awarded a $14.7 million contract with the federal government to do work on the DEW line sites, with a goal of creating five to 10 jobs locally for workers who package and prepare toxic waste for shipment to specialized treatment facilities in the South.

There are four landfills at Cape Dyer: two at the upper site, a non-hazardous waste landfill and a “tier-two contaminated soil landfill,” considered dangerous to humans and the environment.

And another 150 drums still need to be dealt with by debris collection crews.

The messes — which required costly clean-ups — result from the DEW line sites, which stretched in the late 1950s along the Arctic coastline from northwestern Alaska to Iceland.

In the early 1960s, 21 of the 42 Canadian DEW line sites were decommissioned and became the responsibility of the federal government.

The remaining 21 sites continued to be operated by DND until 1993, when operations at these sites ended, and the DND then started a plan to clean-up those sites in 1989, at a cost now expected to come in at $575 million.

The cost of the project has stayed within budget, the DND said.

A 25-year monitoring program of the sites is also underway.