“The government has all kinds of pious intentions” 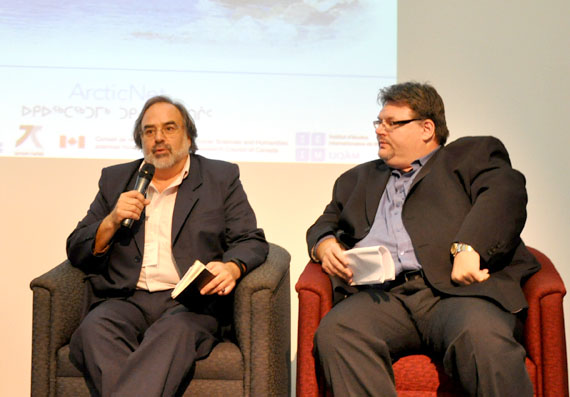 MONTREAL – The mining boom that’s gearing up in Nunavik will bring very little profit to the people who live in the region, says Laval university sociologist Gérard Duhaime.

Quebec’s Plan Nord, which hopes to pave the way for mining development across the North, has promised billions of dollars and jobs for Nunavimmiut, Duhaime told the Arctic in Transition conference in Montreal Oct. 4.

But, as it stands now, people there have very little control over resource local developments, he said.

“The government has all kinds of pious intentions, based on the belief that economic development is a precursor for social development,” Duhaime said. “But history teaches us otherwise. There is no link of cost and effect between the two.”

That’s because in isolated regions, like the North, the distribution of wealth is done elsewhere.

Even equipment purchased for mine operations comes from outside the region, as does the majority of its manpower, Duhaime said.

Currently, 17 per cent of workers at Xstrata’s Raglan nickel mine – the region’s only operating mine — are Inuit.

And although the mining profits are huge, the royalties directed to Inuit communities are disproportionate, he said.

Xstrata has given the region about $100 million dollars in royalties since it started operating in 1997 — but that’s only a slim fraction of its revenue.

Duhaime says the potential wealth that results in Nunavik through mining could be enough to pay for all government services in the region, but only if the money stayed in Nunavik.

“We have to change the equation of the relationship between business, governments, who have the capacity to change, and local populations,” said Duhaime.

But mining projects are coming to the region, whether Nunavik is prepared for them or not.

With the help of money from Plan Nord and demands from emerging world markets in places like India and China, mineral exploration companies are ready to develop iron deposits along Nunavik’s Labrador Trough, which stretches south from Ungava Bay.

Jean-François Arteau, a lawyer with Makivik Corp. who spoke alongside Duhaime at the Montreal conference this week, said Makivik supports Plan Nord – for the most part.

“It’s not that mining is a bad thing, but it has to be done right,” Arteau told the conference Oct. 4. “Makivik is faced with a dilemma – protecting the environment and focusing on economic development.

“We must remember that the North is there for the people who live there.”

Nunavik has responded to Plan Nord with its own Plan Nunavik, a vision for how the region sees its own future – one where Nunavimmiut enjoy the same level of services as their southern counterparts.

But, Arteau acknowledges that “If there are no mines, there are no roads and then no fibre-optic transmission line [which would allow for high-speed internet].”

“It’s important to bring the population of Nunavik to the same level as the rest of Quebec,” he said. “We believe in [the Plan Nord], but with a few hesitations.”