“The embarrassing part was me being Canadian” 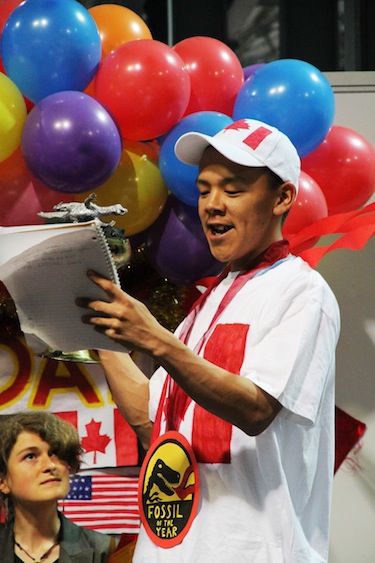 Jordan Konek of the Nanisiniq Arviat history project accepts the “Colossal Fossil” award on behalf of Canada on Dec. 9 at the United Nations climate conference in Durban, South Africa. (PHOTO BY FRANK TESTER)

DURBAN, South Africa — Canada picked up an award Dec. 9 at the United Nations climate change conference in Durban: the “Colossal Fossil” award for its poor performance during the past two weeks.

Sponsored by the Climate Action Network, a global coalition of over 700 non-governmental organizations dealing with climate change, a “First Place Fossil” award went to New Zealand for its mixed messages on climate change action.

But the top award went to Canada, which had already picked up six “fossil of the day” awards in Durban.

They went on to note that: “Canada remains the only country in the world to have weakened its emissions targets after returning from COP15 in Copenhagen and the only country to have signed and ratified the Kyoto Protocol and then say that it had no intention of meeting its targets.

The government killed the only major federal renewable energy program in the country while plowing over $1 Billion dollars a year of subsidies into the oil sector.”

The award was shared with the United States for what organizers called “its sheer (un)ambition”.

A large crowd of international students, photographers, reporters and delegates attended the ceremony, patterned after the “Occupy Movement” that spread last month across much of North America and Europe.

This saw members of the audience shouting out loud messages conveyed by the speaker.

Asked afterward about how he felt about his participation, Konek said that “while it was a good feeling when people repeated what he had to say, the embarrassing part was me being Canadian and receiving the [colossal] fossil of the year award.”

“I think the important part of this is for the Canadian government to see that we have been given this award, and they should be embarrassed. We need to do something about climate change not only for aboriginal people, but for the whole country,” Konek said.

Konek and Curtis Kuunaq had spent the past week at the Durban conference, hosting a kiosk on the Nanisiniq Arviat history project and speaking on climate change to delegates and journalists.

Negotiators vowed Dec. 9 to work into the wee small hours of the morning of Dec. 10 and beyond in a last-ditch attempt to reach agreement on the many accords which have been debated at this year’s conference.

Also during the afternoon of Dec. 9, a huge demonstration, organized by Greenpeace, descended on the conference centre, blocking the concourse where delegates were scurrying from room to room in their final hours of deliberation.

Shouting solidarity with Africa and Canadian youth, who were ejected from the proceedings earlier in the week, they were quickly surrounded by UN security forces.

This prevented them from blocking an entrance to the main theatre where negotiations were taking place.

For more than two hours the mood was tense, with negotiations between protest leaders and UN security staff going back and forth.

Chanting “Climate Justice Now!”, “Act Now!”, and “Listen to the People, Not Polluters,” the demonstrators threatened to drown out the wrangling over words taking place in rooms nearby.

Finally, they were given the choice of leaving peacefully to carry on their protest outside, or to remain behind and be escorted from the building by security forces that would also confiscate their delegate badges and remove them from the site.

The demonstration ended peacefully, but not without leaving hundreds looking on from balconies above with impression that climate change is an issue about which youth are increasingly concerned, vocal, and prepared to address with direct action if necessary. 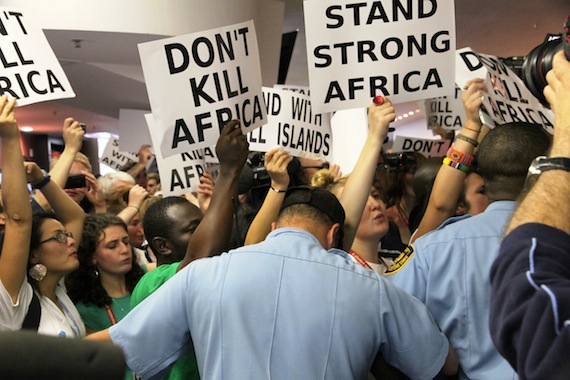