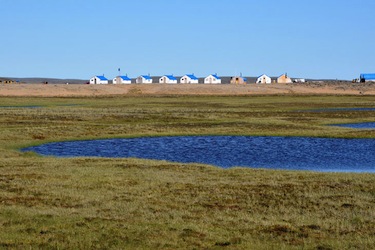 Attempts to kill a rabid wolf at a Nunavut mining camp resulted in an injury to a mining exploration camp worker last weekend.

On July 9, police in Rankin Inlet received a call that a person at a mining exploration camp had received a gunshot wound and was medevaced out for medical treatment.

The incident involving the wolf took place in the early morning of July 9.

“The incident resulted in an injury to a contract employee, who was evacuated for medical care and is currently recovering and in stable condition. The wolf was destroyed and was subsequently determined to be rabid,” said Mike Westerlund, vice-president for investor Rrelations and Corporate Communications at Peregrine Diamonds.

In Nunavut, rabies, a deadly virus, is known to affect wolves and foxes.

During the first three months of 2011, there have been five confirmed cases of rabies in the Northwest Territories and Nunavut, but all among foxes.

In a wolf pack, the rabies virus can spread quickly through bites and wounds.

The virus can cause increasing agitation and hostility over a period of a week to two weeks before it leads to death through respiratory failure.