Nunavut man ponders his direct link to Amundsen and the Maud

A view across to Cambridge Bay with a stone cairn built by the “Maud returns home” team in the foreground, with the Maud and the Tandberg Polar tugboat offshore. (PHOTO BY RED SUN PRODUCTIONS) Jan Wanggaard, leader of the Norwegian team working to bring the Maud back to Norway, uses an inflatable boat to get from shore to the Tandberg Polar, rowing under where the propeller would have sat. The motor was fully retractable, allowing the crew to bring it up for propeller repairs. (PHOTO BY JANE GEORGE) 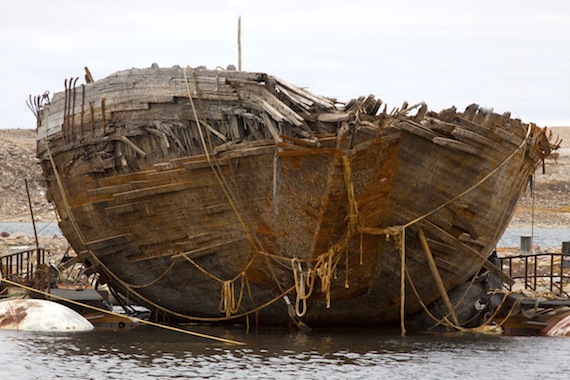 Here you can see the structure and condition of the Maud, whose walls are up to one metre thick in places. (PHOTO BY RED SUN PRODUCTIONS) David Nakahok of Cambridge Bay recounts his Sept. 5 visit to the Maud where his great-grandfather once worked. (PHOTO BY JANE GEORGE)

CAMBRIDGE BAY — For 58 years, David Nakahok of Cambridge Bay has looked across the water at the wreck of the Maud, once sailed by Norway’s polar explorer and national hero Roald Amundsen.

When Nakahok was younger, he’d climb on its exposed pieces of wood when they stuck up through the ice in winter. In summer, he’d fish cod around the ship’s sunken hull.

But now, with the Maud fully out of the water, exposed and visible from Cambridge Bay, Nakahok decided Sept. 4 to drive over in his all-terrain vehicle to see the ship — an important visit because of his direct personal connection to the Maud.

His great-grandfather Nakahok, who lived around today’s community of Gjoa Haven, on Prince William Island to the north, had worked on the Maud and knew Amundsen.

Nakahok was a brave man, willing to work on what was then a boat that must have been “alien-looking” and “so big,” said Nakahok, shortly after his trip over to the Maud, moored on a pontoon barge close to the shore.

At the Maud, Nakahok climbed up a ladder to look down into the ship’s deep curved hold — the wood of its oak deck and masts taken long ago for qamutik sleds and souvenirs or pulverized by 85 years of ice.

Peering in, Nakahok saw remnants of the large motor that helped power the three-masted Maud through Arctic waters.

“I know my great-grandfather would have used it,” he said.

Nakahok admitted to “yes-and-no” feelings about the Maud’s departure to Norway because as he said, “it’s important to us, too.”

The Maud ended up at Cambridge Bay after Amundsen had taken the ship on an unsuccessful attempt to sail through the Northeast Passage, from Asia to Europe.

Amundsen left the Maud in the western Arctic, where it was used for some years by the Hudson’s Bay Co. It eventually sank 85 years ago in waters off Cambridge Bay.

With Norwegian historians keen on bringing the Maud back to Norway, a group of Cambridge Bay residents lobbied in 2011 to keep the Maud — better known to them as the Baymaud, the name given to it by the HBC — in Nunavut, saying the ship was “an archaeological site that needs to be protected as she is, where she is.”

But in 2012, Canada’s cultural property export review board ordered the Border Services Agency to eventually issue an export permit to the Norwegian group eager to bring the Norwegian-built ship back to Norway.

Wanggaard said people — who this year included hundreds off the huge Crystal Serenity cruise ship and German billionaire Otto Happel — don’t come to Cambridge Bay to see the Baymaud, but rather to see the Maud because of its link to Amundsen, the first European to transit the Northwest Passage in 1906 and the first man to reach the South Pole in 1911.

Wanggaard’s project wants to see the 36.5-metre ship towed from Nunavut back to Norway — a 7,000-kilometre journey. There, the Maud would be exhibited at a futuristic museum in Asker, a suburb of Oslo.

The Maud was to head for Greenlandic waters late last summer, and dock in Greenland’s capital, Nuuk, for the winter of 2015.

But then cold weather and technical issues prevented the team of Norwegians Bjørn Myrann, Terje Mørkved, Kjell Myrann, Stig Pettersen and Wanggaard, known in this town of roughly 1,700 for their taciturn ways and Norwegian seafarers’ clothes, from raising the Maud during their third summer of intensive work in Cambridge Bay.

It’s clearly stressful to try to take a ship like the Maud out of cold water.

So don’t talk about past events, future plans or even timelines now with Wanggaard, who said he’s tired of answering the same “f-ing” questions for media.

“I don’t like to be in the middle of the public while I’m doing things. It’s very disturbing,” he said.

Wanggaard didn’t like recent photos taken of the Maud from the shore by local photographers for another Nunavut newspaper because he prefers to take and release his own photos and online updates.

And he didn’t encourage Nunatsiaq News to take photos of the Maud, located about four km from town, or permit a view inside the ship — although shortly after our visit with Nakahok, we saw two more people, presumably not members of the media, climbing up to take a look into the Maud.

“When I do things, I do it in my own interests,” said Wanggaard, known as an artist in Norway, where his previous art installations include “Planet Lofoten,” a giant installation representing the solar system placed in these Arctic islands off Norway.

When discussing the Maud, Wanggaard now prefers to talk about challenges and processes rather than details or deadlines.

There’s the challenge of the ship’s weight: “It’s not just big — it’s very heavy 500 tonnes, which is quite a lot more than we anticipated.”

Inflatable lifting bags, each around four tonnes, attached to “old lady Maud” with straps, finally brought the ship up through the shallow water at the end of this past July, according to the “Maud Returns home offisiel site” Facebook page.

“One year [of] experience. That’s what we needed,” said Wanggaard of the slow process of lifting the ship.

In the hull, Wanggaard and his team found 20 tonnes of mud and metal pieces, pipes and the like, some of which you can see piled up on the Cambridge Bay dock for packing off to Norway.

Nothing “super-interesting” was found on board, Wanggaard said.

Wanggaard doesn’t have the export permit to move the Maud and its artifacts out of Canada yet, although the investment company bankrolling the entire project, Tandberg Eindom, which owns the Maud, will ask for that permit when the ship gets closer to leaving Canadian waters.

A statement from media relations at Heritage Canada said that “nder the Cultural Property Export and Import Act, a cultural property export permit is required to export the Maud from Canada. The owners of the Maud have fully complied with the export permit process and at their request, the permit for the Maud will be issued by the Canada Border Services Agency. There is no deadline by which this request must be made.”

For now, bringing the Maud back to Norway and readying it for display, is about “midway” into the process, Wanggaard said — so another four years or longer.

Wanggaard said he’s not worried about vandalism or leaving the Maud over another winter in Cambridge Bay because the Maud’s wood is still waterlogged and as hard as stone.

And what you see now is pretty much what will some day become the centrepiece of the museum in Norway where there are no plans for restoration, as was done on Amundsen’s Fram, on display at the Fram Museum in Oslo.

“We cherish Maud as an object as much as her story, and I personally long to see her rise and shine again, in a new and different arena that can give her forever life. A place for contemplation and reflection but also challenging and inspirational,” Wanggard wrote on the project’s Facebook page.

When the Maud leaves Cambridge Bay, people in town will be able to contemplate the tall stone cairn, which Wanggaard built near the Maud’s current location, and find some recounting of the ship’s history at the May Hakongak Library and Cultural Centre. 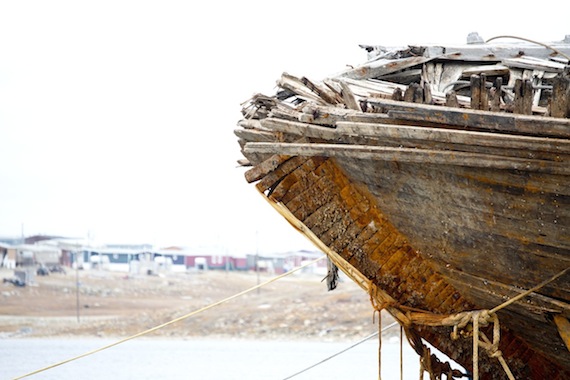 The front of the Maud, seen with houses in Cambridge Bay in the distance. (PHOTO BY RED SUN PRODUCTIONS)