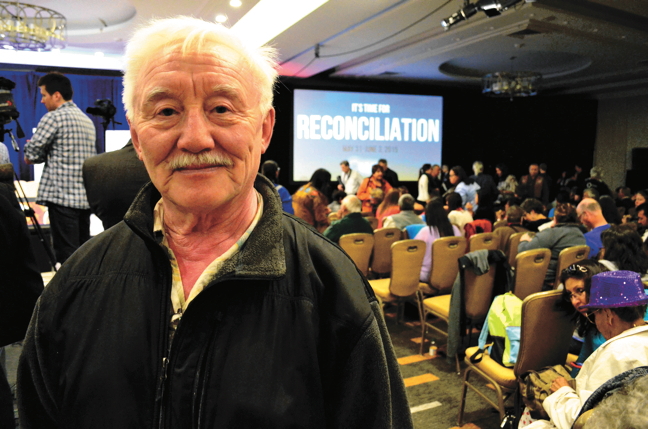 Elder Piita Irniq, residential school survivor, at the release of the Truth and Reconciliation Report in Ottawa in June 2015. His experience at the Turquetil Hall in Chesterfield Inlet, mesh with a recent study’s findings — that he was healthy upon entering residential school, but the awful diet there made him unhealthy. (FILE PHOTO)

OTTAWA — Like most survivors of residential schooling, Piita Irniq remembers the food well.

It was different from the caribou, seal and maktaaq he ate while growing up. At residential school, children ate mostly porridge but on Saturday mornings there were Corn Flakes, which was one of the only foods which Irniq said he looked forward to. There was often an unpleasant soup with lettuce and onions in it. They even had beef cut into four-inch by four-inch squares — served frozen solid.

“It tasted horrible, just horrible,” Irniq said. “I think their idea was that since we ate frozen char at home we would be used to frozen meat. But would you eat frozen cow beef from the South?”

Eleven years old when he arrived at Turquetil Hall, the residence of the Sir Joseph Bernier federal residential school in Chesterfield Inlet, Irniq and the other older students would help the youngest kids cut the frozen meat so they could eat. But the knives the Grey Nuns gave the students were not very good. Often it went uneaten.

One dish Irniq remembers quite well was the Arctic char, which had been a staple to him in his childhood home. But those who prepared it at the school served it with the guts still inside. It tasted awful.

“We went to the schools very healthy as young people but we ate what I consider to be horrible,” Irniq said. “There was not enough food that we liked.”

Those kinds of stories from residential school survivors now have academic proof behind them.

In the first study of its kind, Paul Hackett and a pair of colleagues have discovered that children at the time of entering residential schools were in fine health — at least when it comes to the schools he researched in Manitoba and Saskatchewan.

And that contradicts the federal government’s justification for nutritional experiments practised on Indigenous children at residential schools.

It’s true Aboriginal peoples in Canada experience higher rates of poor health, malnutrition, Type 2 diabetes and obesity but those issues only emerged after their residential school experiences, the research indicates.

Hackett, a researcher and professor at the University of Saskatchewan who specializes in Indigenous public health and the history of disease, has studied Aboriginal health from a historical perspective, focusing first on tuberculosis and now Type 2 diabetes.

His work shows the important role history plays in both modern-day disease and treatment.

Hackett studied the health records of students who attended residential schools from the early days in 1919 until the 1950s.

Overall, the government took roughly 150,000 First Nations, Inuit and Métis children away from their families and enrolled them in residential schools across the country.

Nutritional experiments were common and involved separating the students into two groups and feeding one group adequately while limiting to extremes the nutrients of the other group.

The Truth and Reconciliation Commission estimated that at least 6,000 children died in residential schools and commissioners described the students’ diet as “meagre and of poor quality.”

The government at the time explained these experiments as a necessary response to Indigenous students coming into the schools unhealthy and malnourished. But, according to Hackett’s findings, and the testimony of survivors, that was not true.

Researchers looked into the body mass index, height and weight of 1,700 Indigenous students who had been sent to these residential schools and 80 per cent had normal BMIs.

The average BMI of Canadian youth is actually much higher now. Aboriginal students entering residential schools were actually in better health overall than current school children, according to Hackett’s research.

“We didn’t see any obesity at all,” Hackett said. “But there was an uptick in BMI near the end of the study.” He attributes this increase in BMI in the 1950s to young Indigenous women who had grown up in residential schools becoming pregnant and having children, setting the stage for obesity, diabetes and other health issues.

“This suggests that they were fairly well-nourished coming out of their communities and entering the school system,” said Hackett.

Irniq knows this well, and has for decades. He spent the first 11 years of his life living a traditional nomadic lifestyle inside an igloo with his family in Naujaat, surviving on food and water from the land.

The new research, which was published in the International Journal of Circumpolar Health, suggests that the residential school experience is directly linked to health problems related to diet which disproportionately affect Indigenous people today.

Hackett plans to expand the research now, to look at other health records from residential schools across Canada.

He said his research team has gotten a lot of comments on the value of their research and he looks forward to collaborating with others to compare it to the rest of the country.