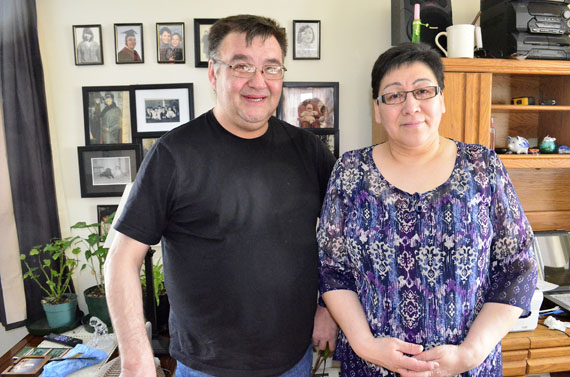 David and Betty Gunn inside the house they’ve owned for 18 years. Following a lengthy dispute with the bank that held their mortgage, they’re getting ready for an eviction. (PHOTO BY JIM BELL) 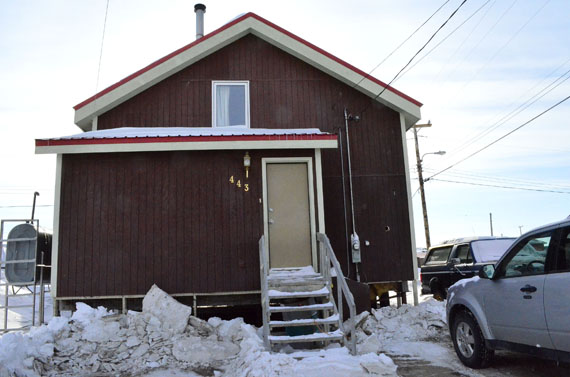 House 443 in Iqaluit. Title to the two-storey, three-bedroom house in Happy Valley has been transferred to the CIBC, following a foreclosure action in court. (PHOTO BY JIM BELL)

When the bank grabs the house you’ve called home for nearly 18 years and tells you to pack up and leave, it’s tough to let go.

But when your credit is decimated, finding a new place can get even tougher.

Betty Gunn and her husband, David Gunn, must vacate their home, house 443 in Iqaluit, around April 20.

That’s the three-bedroom house, located on a corner lot in a pleasant section of Happy Valley, where they raised two boys, both of whom went on to post-secondary education and professional jobs in the South.

“We raised the two boys. We made a lot of sacrifices so they can get to where they are today,” Betty Gunn said.

They’ve always worked hard and they’ve never been unemployed — David Gunn has a job with the Government of Nunavut and Betty Gunn works at an airline cargo office.

But they don’t own house 443 anymore. The CIBC does, following a nightmarish trip the couple took through the banking and legal systems that in 2012 led to foreclosure proceedings and the transfer of their home’s legal title to the bank.

‘Through most of it they coped on their own with a blizzard of threatening letters — except for a few months, they had no lawyer.

“We should have went and hired a lawyer the minute we thought that wasn’t right. But we didn’t. Well, we couldn’t afford it,” Betty Gunn said.

What’s worse is this: they insist to this day that they kept their mortgage payments up to date and that the bank messed up their financial situation for months by applying mortgage payments to a separate personal loan.

They noticed the bank’s mistake in 2010, when they received a letter claiming that at least six month’s worth of mortgage payments were overdue.

That’s when they discovered the bank took what the Gunns thought were mortgage payments and, without their knowledge, used them to pay off the personal loan.

“It just boggles the mind. They kept moving it back and forth from the mortgage to David’s personal loan. So what they were doing is they would dig into the mortgage, the $960 that he would deposit, and put in into his personal account. And the bank would say, where is your mortgage payment — we couldn’t find it.,” Betty Gunn said.

That problem, along with a thick pile of lawyers’ letters, financial statements and court documents, got bigger.

In February 2012, they received a letter informing them of a notice to appear in court on July 25, 2012 for a foreclosure hearing.

“We didn’t know we needed a lawyer, in our ignorance. So we missed that first step. And then all the other paper work started to come in,” Betty Gunn said.

After that date passed, the foreclosure took effect and the bank was able to seize title to the house.

At the same time, they went to other banks to get the debt refinanced — but without a co-signer, that wasn’t possible.

They even went to a firm in Toronto that offers credit to high risk clients. The firm offered them refinancing at 12.9 per cent interest, a $20,000 “set-up fee,” and a one per cent commission.

This would have required them to pay close to $4,000 a month, but they were willing to do it.

“A lawyer refused to sign off on it. He said it was a loan-sharking operation,” Betty said.

When a new manager arrived to run the CIBC branch in Iqaluit, they took their problem to him and got a sympathetic hearing, especially when they showed him the bank’s earlier accounting errors.

“He seems like a nice down-to-earth guy. He tried to help us. He said what we need to do is reapply for financing, start from scratch. But he talked to the CIBC higher-ups and they said no,” Betty Gunn said.

George Hickes Jr., the MLA for Iqaluit-Tasiluk, has worked in banking for more than 10 years — so he understands the plight of his two constituents better than most other politicians would.

And he believes that banks operating in Nunavut must do a better job communicating with clients.

“I think in most instances, better communication and some coaching from the banking staff would go a long way to alleviate most of these problems. If they had just spoken to this couple we’re talking about more than a year ago, they wouldn’t be in this situation,” Hickes said.

Although numbers are hard to come by, it’s estimated that at least a dozen homeowners in Nunavut, and perhaps more, lose their houses to foreclosures each year.

At the same time, legal aid lawyers in Nunavut are prohibited by law from representing clients in foreclosure actions.

In a submission to the federal Department of Finance made in February 2014, a Nunavut resident who asked that their name not be made public said Nunavut homeowners facing foreclosure actions get little help.

“Sometimes, when they are served with a statement of claim, they do not understand that this is a document relating to court. They are usually in no position to defend themselves in court proceedings, nor draft a statement of defence,” said the letter, which is published on the website of the federal finance department.

But Hickes said he believes most people could avoid losing their homes if they got better credit advice from lenders.

“I keep going back to communication. Communication and education from a corporate standpoint, from the banks, can go a long way,” he said.

“A lot of these systems are new to residents of Nunavut. I have members of my family who were born out on the land. A mortgage was not even a known concept at that point,” Hickes said.

Another problem is that with house prices in Iqaluit now ranging between $400,000 and $500,000, families need an income of at least $125,000 just to service mortgage debt on a new home — with heat, electricity and municipal taxes piled on.

This means there’s an urgent need for the Nunavut Housing Corp. to review the eligibility of its current homeownership assistance programs, Hickes said.

Another problem with the national banking system is that because all lots are leased and not held in fee simple by the homeowner, banks in Nunavut don’t offer secured lines of credit backed by home equity.

“This is where we’re at and we can’t fight anymore. I’m tired of fighting and I’m giving up,” Betty Gunn said, sitting at the kitchen table while taking a break from packing up their belongings.

“Let’s get out and move on,” David Gunn said, nodding his head.