After Northmart re-opens, Iqaluit shoppers complain about the stench

“Had to wash my parka because of the smell” 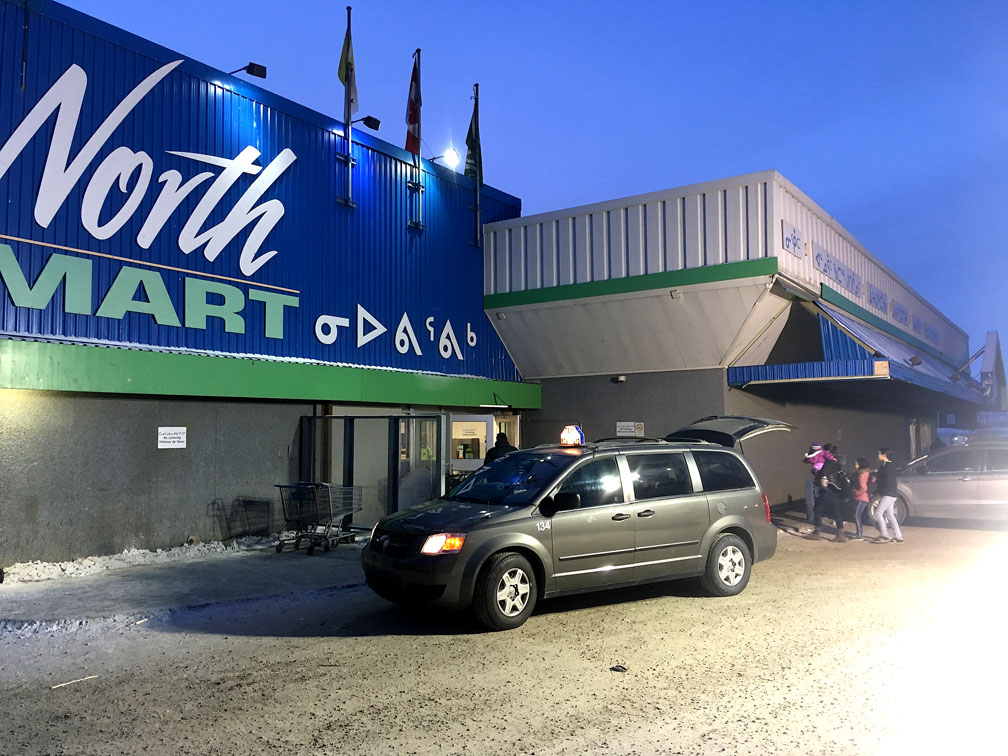 Customers head to the Northmart store in Iqaluit late Saturday afternoon to take advantage of its half-off sale on general merchandise. Northmart held the sale on Nov. 17, only nine days after a fire ravaged a big warehouse behind the store that was full of non-perishable sealift goods. (PHOTO BY BETH BROWN)

Before 9 a.m. on Saturday morning, only nine days after the Nov. 8 fire that turned the Northmart warehouse into a smoking inferno, Iqaluit shoppers lined up in front of the store entrance, waiting for the doors to open.

Bargains at the store included 50 per cent off all general merchandise, leading to big discounts in housewares, clothing and toys, such as a large Lego set reduced from $119.98 to $60.

Shelves with fresh meat, whose neatly wrapped packages had filled the shelves before opening time, were left nearly bare towards the end of the afternoon, as were the freezer compartments.

Meanwhile, during the day, heavy equipment continued to remove debris from the warehouse into oversized dump trucks at one side of the store.

That’s where the burning warehouse, full of sealift merchandise, had spewed black smoke during the 22 hours it took firefighters to extinguish the blaze.

While happy about the bargains on sale, once they got back home, many shoppers later went on social media to comment about the smoky smell inside the store, that clung to their clothes afterwards.

Some said it gave them headaches and trouble breathing, and that they had found a black residue on various items, such as a toaster, whose box one woman had to wipe off.

Jimi Onalik said he “went to ‘Smoke Mart’ today for the extravaganza. Bought some stuff and saved a bunch of money. But had to wash my parka because of the smell.”

For some reason I only took one picture there- of a shovel. But gives an idea of what some stuff was like there… pic.twitter.com/h3QL6gDOEK

Government of Nunavut health inspectors, who had given the store the go-head to reopen on Saturday, said last week that potentially smoke-exposed foods, medicines and medical supplies had been disposed of.

“There is no concern. The fire was a building structure fire and did not involve any large quantities of hazardous chemicals. The fire would typically produce a variety of hazardous gases and large particulate matter,” a Health Department spokesperson told Nunatsiaq News this past Tuesday.

But that didn’t leave some Saturday shoppers convinced that the store has been properly cleaned.

“The area/store itself is contaminated until it’s been remediated properly. Fire really can bring out toxicity from paint, asbestos, chemically treated steel/wood, drywall, etc… It usually takes a few weeks in the south for something like this to be dealt with properly depending on the scope of the damage just to be on the safe side. My rule of thumb, if you can still smell it, it’s probably still a no-go zone,” said Sam Millstar in long online discussion on the re-opening of the store.

A smoke remediation expert, Sean Scott, told Nunatsiaq News last week that toxic particles and residues that stick around after the flames are out can be lethal.

“We’re talking about the most dangerous chemical mix,” he said in a telephone interview.

These include chemical compounds released by the burning of plastic, foam, carpet, wood, synthetic fabrics, wool, electronics and household chemicals—all of which would have been found inside the Northmart warehouse.

It’s like a “toxic soup,” Scott said, with some of the compounds similar to those as chemical weapons during World War I.

“Relying on these methods alone will most likely leave occupants exposed to the hazards associated with toxic particulate exposure and odour re-occurrence.”