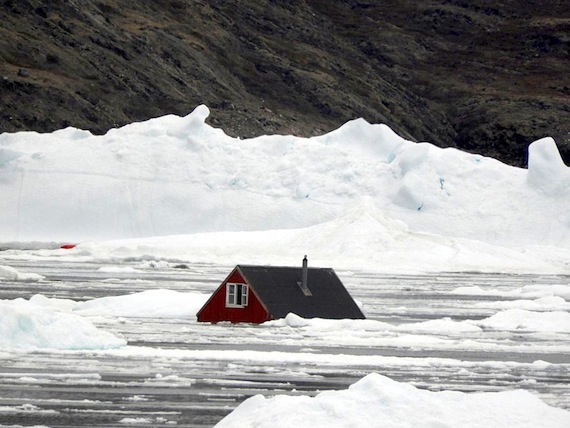 To understand the devastation caused by the June 18 tsunami in Greenland, you can consider this photo of a house from Nuugaatsiaq, where 11 houses were swept into the sea, from by the Arctic Joint Command which visited the village this week. 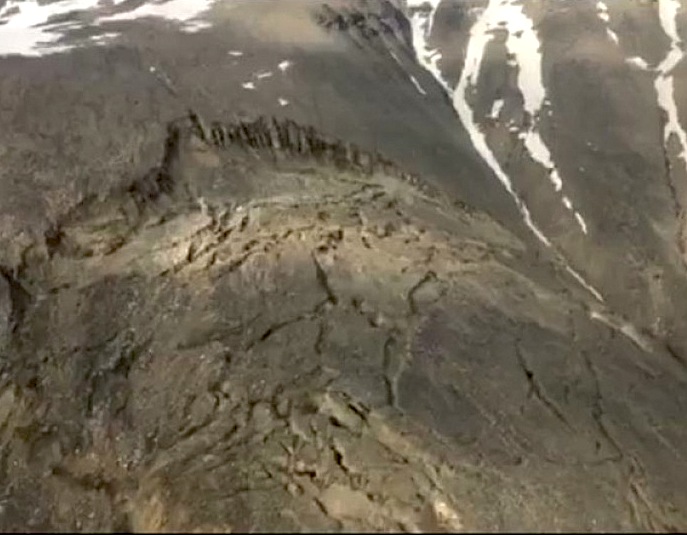 This photo from the Arctic Joint Command shows a slope, not far from that which tumbled into the sea about 30 kilometres from Nuugaatsiaq, triggering a tsunami June 18, that could also collapse at some point into the water. 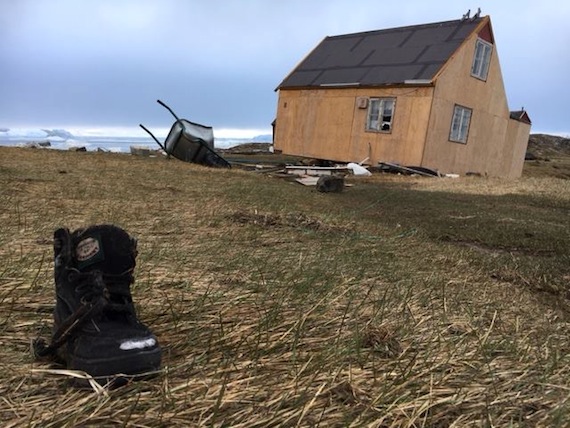 A house, battered by the June 18 tsunami, and a lone boot: one of the sad scenes photographed in Nuugaatsiaq this week by the Arctic Joint Command.

June 21, National Day in Greenland, is usually a day for celebrating the island’s home rule government, but this year, people are still in shock over last weekend’s tsunami.

With eyewitness reports that, on June 18, three adults and a child were pulled into the sea when the tsunami poured into their village of Nuugaatsiaq, and the June 20 confirmation that they are “presumed dead,” Greenland’s national day will be a day of mourning, with the red-and-white flags flown at half-mast around the island.

June 21 will be an occasion “to show our grief and condolences for the lives lost in the flood,” Prime Minister Kim Kielsen said June 20.

His statement came shortly after Greenland police said the four, missing since June 18, are “now presumed dead after the tsunami in Nuugaatsiaq.”

“This is the worst thing that could happen—that the tsunami would cost the loss of life,” Kielsen said in the release in which he also offered condolences to the grieving families and thanked everyone who had responded to the emergency on the northwestern coast of Greenland.

Stories from people in Nuugaatsiaq, as well as from the first responders on the ground, are now surfacing in Greenland’s newspaper, Sermitsiaq AG.

Ivik Cortzen, 25, of Nuugaatsiaq, who was on her cellphone when the tsunami first hit, watched as waves started to come into the community of about 100.

“The third time the water swelled, I ran out [of the house] and started to run, but I had forgotten my jacket, and hurried back to fetch it. When I went outside once again, the stairs were gone, but fortunately I could step on some ice and some wood, and I jumped toward the ground and started running for the hills,” Cortzen told Sermitsiaq.

Malik Nieman, an experienced helicopter pilot, who landed in Nuugaatsiaq from Uummannaq within hours after the tsunami struck about midnight June 18 to start the rescue operation, said the scene there “was the most horrible I have ever seen.

“It was unreal, almost like in a horror movie.”

Thanks to videos taken by some in Nuugaatsiaq, you can now watch the frothy and ice-filled water rising from the sea and spreading on the land, as in this video shared on YouTube.

On June 18, pilot Nieman flew into and out of the community for 10 hours, bringing the injured and others to safety.

Since then, the Arctic Joint Command has returned to Nuugaatsiaq to evaluate the extensive damage, feed sled dogs left behind and re-start generators in an effort to get telecommunications running again in the hard-hit area.

The Uummannaq fiord remained under a tsunami threat this week, with officials reporting other weak portions of the cliffs around the fiord, which were spotted during aerial surveys.

Meanwhile, experts have become increasingly convinced that a huge landslide, whose vibrations registered 1,500 kilometres away, was responsible for the tsunami, rather than an earthquake.

That’s in part because there were no aftershocks—as was the case this past January when an earthquake, followed by aftershocks, shook northern Baffin island and the High Arctic.

Some have suggested the landslide which caused the June 18 tsunami could have been be due to erosion, precipitation or changing sea currents and water levels, all of which can create conditions for land slippage.

Relief efforts to those affected by the tsunami continue, with large donations from Iceland and the Faroe Islands, a commitment of continuing aid from Denmark, personal and corporate contributions, help from the Red Cross and fundraisers, including a concert planned for next weekend in Nuuk.

If you want to make a donation to the relief effort underway in Greenland, you can make a bank transfer, using the following information: 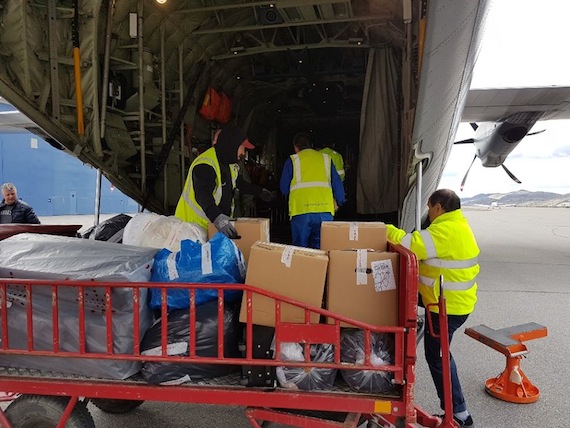 Donations are loaded for delivery June 20 for those who lost everything in the June 18 tsunami in Greenland and the resulting evacuation of villages: Air Greenland in Kangerlussuaq collected 30 boxes of clothes and shoes along with coffee and other dry goods, which were loaded on to a Hercules for delivery to Uummannaq. (PHOTO/ ARCTIC JOINT COMMAND)