Agnico-Eagle moves on asbestos control at Nunavut gold mine site

“It’s all about controlling the dust” 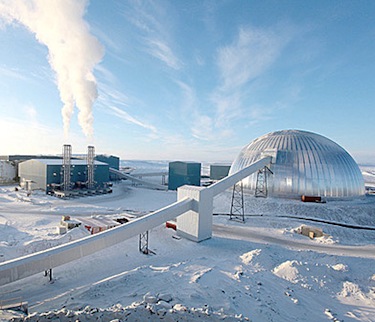 Agnico-Eagle’s Meadowbank gold mine has a problem with asbestos dust that the company is tackling with a number of measures. (FILE PHOTO)

Although it’s business as usual at the Meadowbank gold mine near Baker Lake, some of the 1,050 workers on site now wear special gear, such as disposable outerwear and respirators, when they’re on the job.

That’s because this past January, Agnico-Eagle Mines Ltd. found naturally-occurring asbestos fibers in the dust samples taken from the secondary crusher building at its Meadowbank mine. A second sample in March confirmed the presence of asbestos, which, with prolonged exposure, is linked to a variety of lung ailments and cancers.

Asbestos has been found at other gold deposits in Australia, but “it was certainly something we weren’t expecting,” said Dale Coffin, Agnico-Eagle’s director of corporate communications.

“But with the sampling program we have, we were able to detect it.”

The company has since identified small concentrations of fibers in the ore from some areas of the Goose and Portage open-pits where Coffin says there are “very small amounts” of naturally-occurring asbestos in thin bands.

There also seems to be an association between the presence of asbestos and soapstone, he said.

The presence of asbestos was not revealed in earlier sampling of the ore, Coffin said, but the company is now rechecking that information.

Air sampling continues to provide results that aren’t always consistent about the levels of asbestos, he said.

But to reduce the amount of any asbestos that workers could be exposed to, the company has changed work practices.

It’s implemented personal hygiene measures such as disposable coveralls and slippers over boots as well as training and measures to control and prevent the spread of asbestos dust to non-affected areas.

Workers in the mill and crusher plant must now take off that protective gear before they leave those areas and are required to use specialized vacuums to clean their work clothes.

Air sampling is also done regularly to monitor airborne asbestos levels in the occupied areas across the mine site.

“We’ve implemented a standard [for asbestos] that’s even more stringent than the current ones that are required in the [Canadian] mining act,” Coffin said.

Changes have been made to the dust control ventilation system that have “significantly decreased the amount of airborne dust in the crusher plant,” according to a Meadowbank bulletin on dust control and asbestos.

“It’s all about controlling the dust, and we are going to implement measures where there’s more dust,” Coffin said.

Other systems to control asbestos include conveyor enclosures, water and dust-suppressant sprays.

A full-time industrial hygienist is overseeing the asbestos management program.

Agnico-Eagle has also hired an external asbestos expert, while a third-party laboratory is carrying out the asbestos analysis.

Soon the mine will start processing ore from a new pit where no asbestos has been detected, said Coffin, so the hazard from asbestos is expected to diminish.

Fibrous asbestos can be hazardous because its tiny particles can remain suspended in the air for long periods of time.

Prolonged exposure to asbestos in mining has been linked to:

• asbestosis, where the asbestos fibres scar and damage the lungs;

• lung cancer related to the degree of asbestosis in the lungs;

• mesothelioma, a cancer of the lung’s lining, and,

• cancer of the gastrointestinal tract and larynx.