NIRB to study DEIS to ensure conformity with guidelines 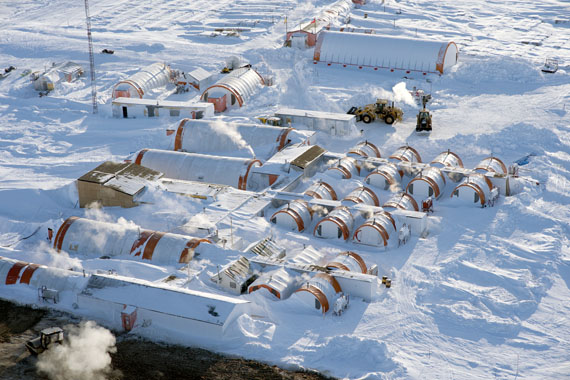 The Meliadine exploration camp near Rankin Inlet, in an aerial photo taken in 2011. (PHOTO COURTESY OF AEM)

The proposed Meliadine gold mine, to be connected to Rankin Inlet by a 24-kilometre all-weather road, would operate for at least 13 years, based on the company’s current estimate of its gold deposits.

Agnico-Eagle will extract gold from a series of open pits and will mine one deposit using an underground shaft. An on-site mill will break ore into small particles so they can be rinsed with cyanide to remove the gold, which they’ll refine into gold bars to be transported to the South.

The company hopes to start production in 2017.

The massive 11-volume draft environmental impact statement contains thousands of pages and covers a long list of potential effects that a variety of agencies will likely look at after the DEIS is made ready for technical reviews.

These include the mine’s likely effects on birds, fish, vegetation, permafrost, ground water, marine life and terrestrial wildlife like caribou.

The statement says the project “is not expected to remove very much caribou habitat,” and is unlikely to affect caribou numbers or their distribution.

The company does propose a “no hunting, trapping, harvesting or fishing policy” for employees and contractors working at the site to help protect wildlife.

As for the project’s potential socio-economic impact, the company said these are likely to be both negative and positive, but community well-being is unlikely to suffer.

“For most people in communities, health status will improve, families may have more resources and can potentially function better, and households will have more opportunities to save. These are all considered significant benefits,” the DEIS said.

“There will be an adjustment period during which negative effects may be expected until people learn to manage life changes such as wage income, diet and nutrition, and stresses.”

The review board’s staff will now do a review of the draft statement to find out if it meets guidelines the board issued to Agnico-Eagle in February 2012.

In a letter to the company, the NIRB’s director of technical services said the board expects to finish that work by Feb. 11.

If the draft statement passes muster, the review board, after formally accepting it, will give public notice of a technical review.

That’s when experts working for various government agencies will scrutinize claims made in the DEIS to determine if they represent an accurate assessment of the project’s environmental risks.