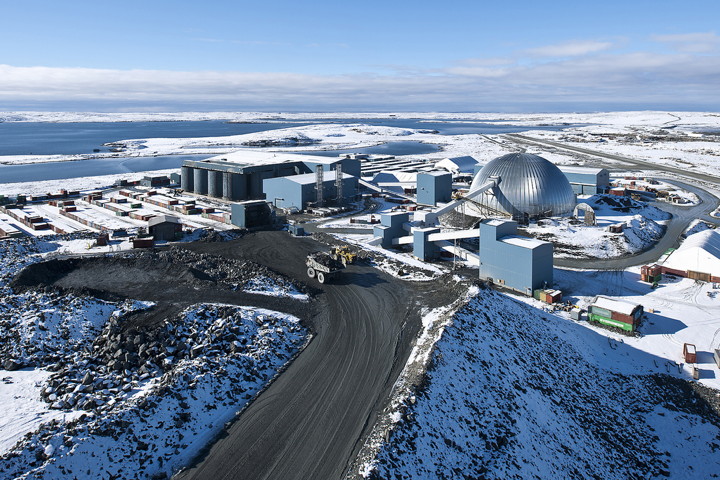 Agnico Eagle Mines says it is confident that levels of lead and other heavy metals in vegetation around its Meadowbank gold mine site are safe at this point and pose no threat to human health through the consumption of country foods.

The company recently submitted a letter to the Nunavut Impact Review Board saying just that, in response to another letter sent to the NIRB earlier this year by Health Canada citing potential concerns with elevated lead levels near the gold mine, about 100 kilometres from Baker Lake.

“We’re being very transparent,” said Ryan VanEngen, a biologist on staff with AEM who coordinates with external consultants to conduct environmental testing around the mine.

“This is a very complex study and we don’t see that there’s any potential concerns for harvesters at all, after a few years of mining, we’ll be conducting a study again to evaluate the potential effects. But there is no risk to harvesters.”

By law, AEM must conduct regular screening level risk assessments, or SLRAs, of plant samples in and around the Meadowbank mine to ensure that vegetation, which could be eaten by animals hunted by Nunavummiut, is not contaminated by toxins introduced to the environment through mining activities.

The last part of that statement is important because metals such as cadmium and lead exist naturally in the vegetation due to the prevalence of those metals in many Nunavut soils.

In AEM’s April 16 letter to the NIRB, the company cites studies of other wildlife populations in Greenland, Nunavik and Alaska that show equivalent lead levels in caribou and Canada geese in places not associated with mines.

We were unable to access all of the studies mentioned by Agnico Eagle, some of which are contained in scientific journals which do not publish their content online.

At least two studies cited by the company that examined contaminants in caribou elsewhere in the North suggested elevated levels of lead in the organ meat could have been due to lead shot used to kill the animals.

However many of the studies do not mention lead ammunition and still show higher levels of lead contamination in wildlife from other northern jurisdictions compared with predicted levels at Meadowbank.

The company also mentions in its letter that lead levels detected in all but one sample of vegetation near Meadowbank were low and that the one elevated sample would be eliminated in most scientific studies because it lies outside the main cluster of results.

“These are anomalies that we saw,” said VanEngen. “We don’t have an explanation for it but if you look at the data, they are all low except for that one elevated unit which is tough to explain. I could speculate, but as a scientist we just report the data.”

Last, AEM points out that in February 2013, Health Canada changed its guidelines for lead consumption from a tolerable daily intake of 3.6 micrograms per kilogram of body weight per day to a new “Risk Management Strategy for Lead” that says no amount of lead is good and that consumption should be as low as possible.

This conversation between the mine and regulatory bodies serves to highlight at least one fact: environmental monitoring in Nunavut is a complex process.

Every three years, Agnico Eagle must collect samples of soil, berries and vegetation directly adjacent to the site, about a kilometre downwind from the mine and also at a point 16 kilometres northwest and upwind of Meadowbank, to compare areas not affected by the mine.

The last sample collection at Meadowbank was done in 2011, so the next one will be undertaken this summer, in August.

Vanengen said AEM contracts an environmental consultant group to collect the samples that the contractor submits to an accredited third party laboratory in southern Canada for analysis.

A report on the results is then submitted to AEM and in this case, will be incorporated into the mine’s annual report to the NIRB in spring 2015.

It’s important to bear in mind that neither the company nor the NIRB test any of the actual wildlife meat or organs.

Instead, they use a standardized modeling technique that allows them to predict the impact toxins would have on wildlife muscle and organ meat and how that, in turn, would affect children and adults who eat those meats.

The company suggests in its letter that based on new Health Canada guidelines, the Nunavut government should “re-examine existing guidance for the consumption of caribou organs to ensure the protection of local harvesters.”

If there was a concern about toxins in wildlife, tissue testing would fall to the Nunavut government’s environment department, which is notoriously busy and understaffed.

One department staffer, speaking for background only, said there are only a handful of biologists responsible for all of Nunavut’s caribou and that more ought to be done to monitor certain populations, especially those near mines.

But with limited capacity, increased testing is highly unlikely, he said.

Another staffer pointed out that caribou don’t sit and graze outside the Meadowbank mine for 12 months of the year. They migrate through, eat sedge and move on, which would likely limit their exposure to these low levels of heavy metals.

Agnico Eagle’s Meadowbank gold mine is expected to operate until 2018. Construction on the company’s nearby Meliadine gold mine, which is currently in the regulatory approval stage, could begin as early as 2016.

Agnico Eagle recently signed a host of production and exploration agreements with Nunavut Tunngavik Inc., and also announced that it would be donating $5 million toward a Nunavut university.