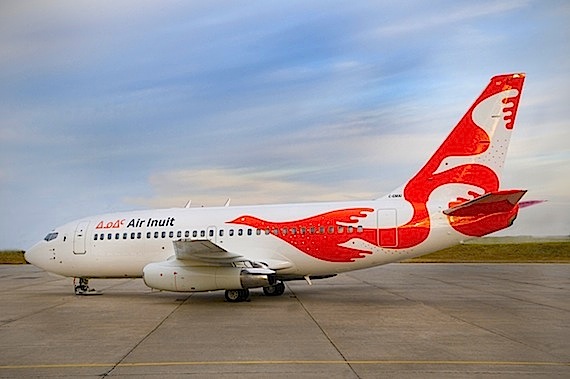 Air Inuit’s new look – the image of three interwoven birds – has been painted on to the airline’s latest addition, this Boeing 737. The rest of the airline’s fleet will be repainted with the same design over the next three years. (COURTESY OF AIR INUIT)

Air Inuit has a new look that will take to the skies in mid-December after the airline underwent a redesign earlier this year.

As part of the revamp, the Makivik Corp.-owned airline decided to swap its trademark red, orange and yellow stripes for a simple black and orange corporate logo, in both English and Inuktitut.

And its fleet will get a larger-than-life new look, too – a giant, orange bird, which wraps gracefully around the tail of the plane and creates the outline of two more white birds.

“We wanted to take an Inuit cultural aspect and make it reflect an airline,” said Andy Moorhouse, chairman of Air Inuit’s board of directors and Makivik’s corporate secretary.

“The design is really meant to bring the next generation of Air Inuit onto the next level, from turbo prop to jet.”

The bird design has been painted onto the airline’s newest fleet addition, a new Boeing 737.

The airline’s second B737 goes out for flights tests this week and is expected to begin service in mid-December, where it will fly the Montreal-La Grande-Puvirnituq route.

The new jet is part of Air Inuit’s fleet upgrade that began last year. The airline has since purchased new Dash 8-300s for its regular scheduled service, while replacing its Hawker 748 models with the Dash 8-300 cargo planes.

The upgrade is in response to demands for more charters from exploration companies working in the region as well as a need to improve the airline’s efficiency, Moorhouse said.

Air Inuit’s new design will be painted onto the rest of the airline’s fleet over the next two to three years, as aircraft are serviced.

Moorhouse has heard positive comments from passengers about the airline’s new look, but he’s also heard from flyers who are sad to see the airline lose its distinctive red, orange and yellow look.

“Those stripes were iconic of Air Inuit for many years, a lot of people grew up with those colours,” Moorhouse said. “But they also see the need for the change with the company growing.

“It’s a positive change for the company that everyone will get used to over time.”

The iconic stripes seen on Air Inuit’s fleet weren’t always there, though; when the airline officially launched in 1978, it used a navy blue and yellow design of the northern lights.

The airline’s first aircraft was a DeHavilland Beaver, originally purchased in the early 1970s by the Northern Quebec Inuit Association to transport negotiators to Nunavik communities.

When they signed the James Bay and Northern Quebec Agreement in 1975, Makivik Corporation was born, which founded Air Inuit three years later with that first Beaver airplane.

Today, the airline counts more than 25 aircraft in its fleet and about 500 employees.