Air ships on their way to Canada’s North

“It took us a while to get over the giggle factor” 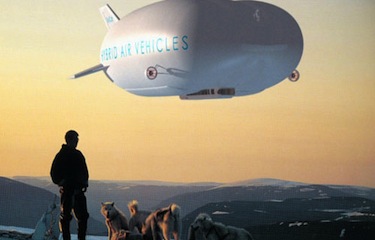 Here’s an artist’s depiction of what an airship might look like in Canada’s North. (IMAGE FROM HYBRID AIR VEHICLES)

What flies in the air, is shaped like a giant white cigar, stands up to six stories high, and may soon be seen over Nunavut?

It’s an airship, and many hope these new flying machines, which have been called “new wave blimps,” will be able to provide mining industries with cheaper and cleaner travel by 2014.

The company is already designing a “long-endurance multi-intelligence vehicle” for the United States military to use for surveillance in Afghanistan.

Its huge hybrid air vehicles— due to go into construction in 2012 – will be able to fly at speeds up to 185 mph and carry at least 50 tonnes of cargo, nearly double the payload than a full-loaded C-130 Hercules.

Companies in Canada’s North could use these airships to airlift several heavy equipment trucks to an isolated mine site or move in a crucial piece of equipment for processing precious metals — at any time of the year.

That’s because the helium-filled airships have another plus: they float better in cold weather.

And new technology makes airships tougher and safer than they used to be.

The world was traumatized by the Hindenburg disaster of 1937, where a Zeppelin air ship crashed in New Jersey, killing 36 passengers.

But airships today use a combination of lighter-than-air helium instead of hydrogen, a highly flammable gas, to float and they’re built with tough “space-age” fibres, like spectra, up to 10 times stronger than steel of equivalent weight.

The airships are also clean and fuel-efficient: the “hybrid” principle means they use air flow and lighter-than-air technology to generate lift rather than relying on expensive fuel to travel.

Powered lift is used during take-off and landing, but the landing system’s “suck down” means they can land on land, water, ice and snow.

The airships’ ability to launch, land and load from gravel airstrips, water, snow or ice surfaces with no preparation or handling equipment could save end-users both time and investment in infrastructure, says Hybrid Air Vehicles.

Mining companies in Nunavut say the lack of transportation infrastructure remains the single largest challenge to working in the territory.

“It took us a while to get over the giggle factor,” Barry Prentice, a professor and director of the Transport Institute at the University of Manitoba, told Nunatsiaq News in 2005, when the university hosted an “Airships to the Arctic” conference. “”What airships actually hold for Nunavut and all the North is the opportunity to become part of the rest of the world economy. It’s very hard for the North to be plugged into the rest of the economy when you don’t have the transportation costs to allow you to compete.”