Photo exhibit on display at Montreal’s McCord Museum through April 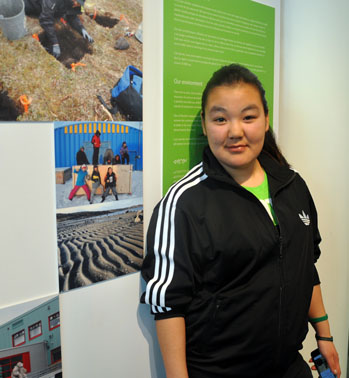 Maggie Irqumia stands next to one of her photos that appears in the exhibit. (PHOTO BY SARAH ROGERS) 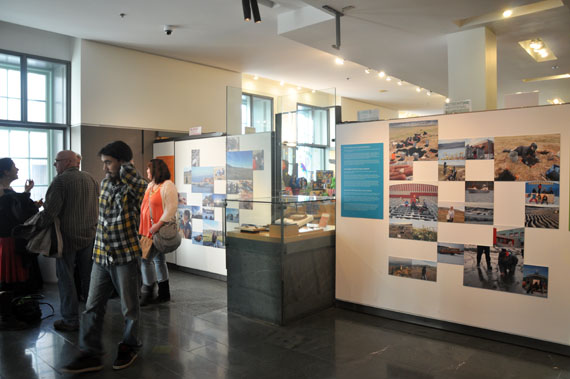 Sivunitsatinnut ilinniapunga stays on display at Montreal’s McCord Museum until May 4. (PHOTO BY SARAH ROGERS) 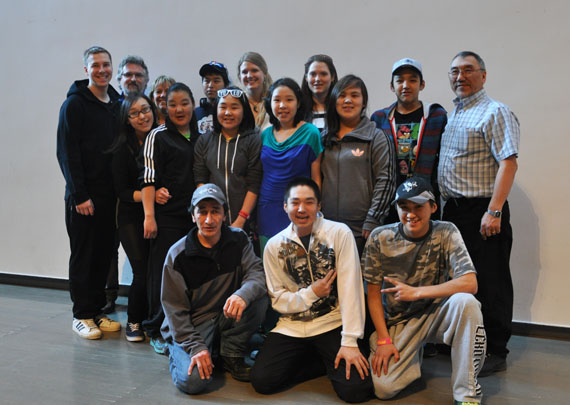 Students and teachers from Tukisiniarvik school pose with Akulivik mayor Adamie Alayco and Avataq archeologists Tommy Weetaluktuk and Pierre Desrosiers April 16 at the launch of the group’s photo exhibit in Montreal. (PHOTO BY SARAH ROGERS)

She and her fellow students spent hours at an archeological field school last summer, excavating a site about five kilometres from their home community of Akulivik in Nunavik.

After mixing soil from the excavation site with water, students spent hours sifting and stirring.

“It took long and it was really heavy,” said Qinuajuak, 14.

But their efforts paid off — the sieving helped uncover tiny artifacts from a Dorset site on Qikirtarjuaq Island that wouldn’t have otherwise been unearthed, including a stone knife, harpoon head and a tiny figurine.

As part of Avataq Cultural Institute’s archeology week, a group of students from Akulivik’s Tukisiniarivik school are showing off the fruits of their labour to a wider audience.

The students launched a photo exhibit called Sivunitsatinnut ilinniapunga (For our future, I go to school) at Montreal’s McCord Museum April 16, featuring photographs of their field work, their community and the surrounding landscape.

“It’s great,” said Qinuajuak. She’s proud to share her work, along with images from her community.

Her schoolmate Maggie Irqumia, 17, shows some of the photographs she took herself; one image reveals a cluster of pink starfish and a greenish sea urchin attached to a rock.

“I thought it was beautiful, and I like to eat them,” she smiled.

Another of Irqumia’s photos shows the perfectly-molded waves left in the sand on a beach near Akulivik after the tide has gone out.

In other photos, Akulivik youth are pictured in and around the community, in both winter and summer scenes.

The archeological aspect of the project began in 2010 when Avataq started working with Akulivik elder Simon Mikimak to scout different sites in the region that could have historic value.

One of the sites they focused on was a place on Qikirtarjuaq Island where Makimak was born.

An old trading post also operated on the island from the 1920s to the 1950s — well before Akulivik became a settlement.

When the trading post closed, Inuit in the region relocated to Puvirnituq and lived their until 1973, when Akulivik was settled and became an official community.

The site where Avataq set up its field school last summer is called Kangiakallak, a Dorset site with remains of the sod houses that the Dorset people lived in along with the semi-subterranean qarmait built later by the ancestors of modern Inuit.

“We collaborated with the community to determine which sites they wanted to learn more about,” said Avataq archeologist Pierre Desrosiers. “And the goal of the project was to involve youth in preserving their own culture and history.”

Following the field school, students had a chance to show off their finds to Akulivimmiut, including harpoon heads, a 100-year-old wooden bowl and an ivory figurine that Desrosiers said could be 1,000 years old.

“The community is really excited to see what was created before their time,” said Akulivik mayor Adamie Alayco, who accompanied the students to the exhibit launch.

Sivunitsatinnut ilinniapunga will be on display at the McCord Museum until May 4.

After that, the artifacts and photography will travel back north to Akulivik, where the exhibit will be shown to the community,

Akulivik doesn’t have a permanent facility to keep the artifacts, Desrosiers said, but the community hopes one day to build a local museum. 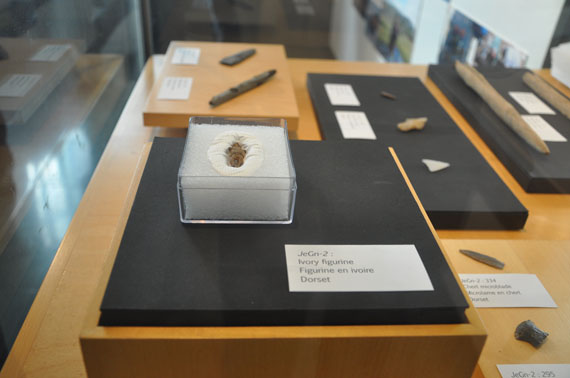 A tiny ivory figurine on display at the McCord Museum is one of the many artefacts that secondary students from Akulivik helped to unearth at a local archaeological field school last summer. (PHOTO BY SARAH ROGERS)