Temps up into the 30s are breaking records around Alaska 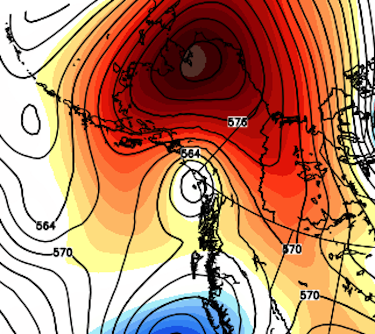 In this map from WeatherBell.com the red shades show an unusually strong ridge of high pressure at high altitudes, which promotes sinking air and hot weather, which extends into western Nunavut.

Alaska is feeling the heat, with its record-breaking heat wave making the news in Alaska and across the United States.

Alaska temperatures broke long-standing records on June 18, the Alaska Dispatch reports, including Anchorage, which recorded a balmy 27 C. at the National Weather Service office at 4 p.m.

Kotzebue at 13 C also set a new high for its June 18 low temperature.

And now the heat is predicted to head from Alaska into western Nunavut.

In Cambridge Bay, where normal temperatures range from a low of 1 C to 8 C, the Environment Canada forecasts into the weekend show sun and highs of 13 C to 19 C, with lows from 6 C to 8 C.

Kugluktuk, where temperatures usually range from 3 C to 11 C, will see lows of 8 C to 13 C and highs up to 22 C under sunny skies.