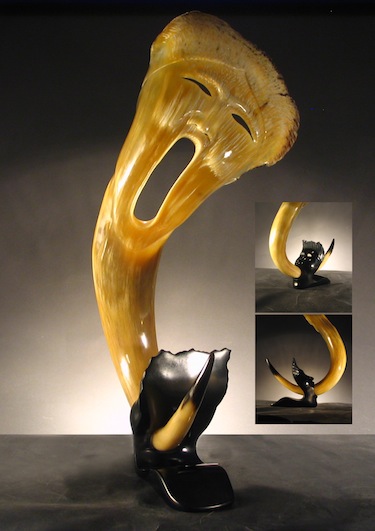 Facing Forgiveness,” based on the legend of Sedna, who is facing her father in this carving made by Alec Tuckatuck out of muskox horn and serpentine. (PHOTO BY A. TUCKATUCK) 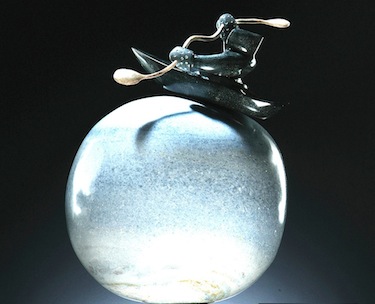 This carving by Alec Tuckatuck made in blue marble, black soapstone and caribou antler shows the legend of Kiviuq, the legendary Inuit hero. (PHOTO BY STEPHEN GREGG) 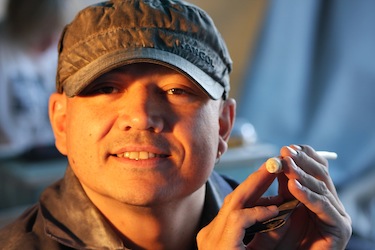 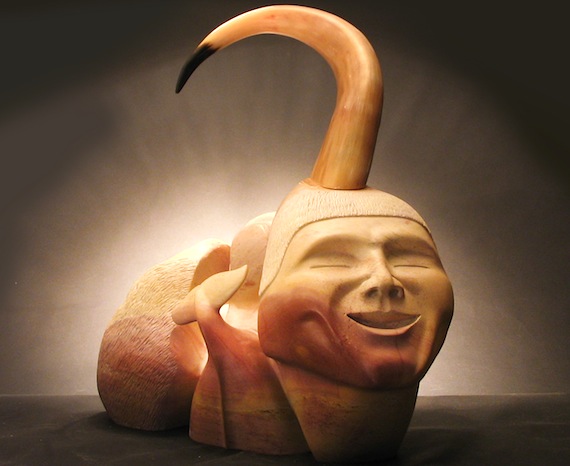 “Lumack,” priced at $10,000, made out of wonderstone and muskox horn, is based on the legend of a blind boy called Lumack (Lumaq) who regains his sight back with the help of a loon. (PHOTO BY A. TUCKATUCK)

Like many Inuit carvers, Alec Lawson Tuckatuck has his tools and his carving shed and a store that sells his wares, but Tuckatuck is no ordinary Inuit carver.

His “carving shed” is 1,000 miles from the Arctic, an insulated camper parked behind his father’s house in New Brunswick.

And his store doesn’t even exist in the physical world — it’s online.

“The website has been my number one best investment by far,” said Tuckatuck.

“It’s an immediate online portfolio, but also a means for me to have a gallery where I can represent myself and my work. It’s wonderful, this technology really has enabled many things for artists such as myself.”

His customers come from across the United States and Canada, but also European countries like Germany and France. Some are longstanding wealthy collectors of Inuit art, while others are newbies who chanced upon his site while Google-searching and fell in love with a particular piece.

The web has altered traditional means of commerce for many Inuit artisans, often for the better.

Take the Facebook swap-sell sites that have sprung up across Nunavik and Nunavut in the past year.

Meanwhile, larger sites like Etsy, Art Fire and DaWanda give craftspeople, artists and designers the ability to market niche hand-crafted products to the world.

But while some Inuit artists have dived into this new world head first, many carvers still do things the old way: make a carving, then walk door-to-door through the community looking for buyers.

Tuckatuck is something of an internet pioneer. And ironically, the reason he can do his work so successfully long-distance is among the reasons he left the North.

“I would love to be able to do this more easily up North but it’s next to impossible to survive and build a business like this up there,” Tuckatuck said.

For one, there is the housing situation; if you don’t have a government subsidized home, living in the North is tremendously expensive.

Then there’s shipping. Sending a regular package from the south is pricey enough, but try sending Carrara marble, which comes from a famous quarry outside a small Italian city at the top of the Tyrrhenian Sea.

“It’s a white stone, almost pure, very consistent, wonderful to work with and much harder than soapstone,” Tuckatuck said.

Then there’s the cost of maintenance. When tools break down in the South, Tuckatuck can get them fixed in an afternoon, whereas in the North waiting for just the right part can take weeks.

When you’re running your own business and surviving strictly on your sales, a missed week or two of work can be devastating, Tuckatuck said.

Tuckatuck grew up in Kuujjuaraapik, learning how to carve from his grandfather and uncles.

When he was 11, he moved with his family to Miramichi, New Brunswick. He traded his carving tools for a baseball mitt and a hockey stick.

At one point during high school, Tuckatuck was ranked the top shortstop in Canada.

And at age 16 he was selected to try out for the Canadian National Under 17 hockey team. He got injured during the tryout, but still ranked third and just missed getting picked.

Yet even while playing sports down south, carving was always on his mind.

“Visualizing how stone becomes art helped me to visualize for sports,” said Tuckatuck. “A stone will often reveal itself to you, it will tell you what it wants. In hockey, just like with the stone, I could see certain things in abstract ways. I could visualize players’ movements or see plays before they happened. It was like a meditating sort of thing.”

After graduating with a bachelor’s degree in physical education from the University of New Brunswick in Fredericton, Tuckatuck moved to Kuujjuaq and began teaching at Jaanimmarik School. There he picked up carving again.

Dave Forrest, who owns and runs Tivi Galleries, began displaying his work. Tuckatuck said he still sells much of his work through Forrest.

“He has been a mentor since I first started pursuing professional arts,” said Tuckatuck. “He has been there for me through thick and thin.”

A medical trip south with a girlfriend in 2004 brought Tuckatuck to Montreal. High rents and other challenges of living as a professional artist in a big city recently drove him back to New Brunswick, but he plans to return to Montreal soon, which he says has an inspiring artistic community along with great galleries and museums.

But with an art form that draws inspiration from the Arctic environment and the animals therein, how does one stay inspired when in the South?

“The land is always with you, you can never take that out, no matter where you are,” said Tuckatuck. “That spirit and that energy and that feeling remains a part of you, it never leaves, and inspiration is never hard to find.”