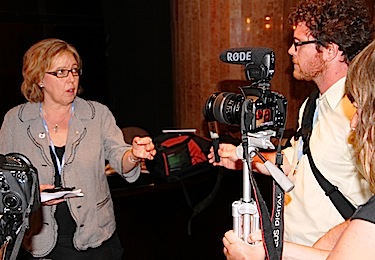 Following Environment Minister Peter Kent’s press conference, Elizabeth May, leader of the Green Party of Canada, the only opposition member of parliament in Durban, slammed Canada for including no members of the opposition in its official delegation to the climate change talks — as was the case in previous years. Kent has said because the current government holds a majority government, there’s no need to include opposition members. (PHOTO BY FRANK TESTER)

Canada’s Environment Minister Peter Kent says all delegates at the conference are united with the goal of preventing dangerous human interference with the atmosphere and climate. “They’re here to make a difference. They’re here to get results and, ladies and gentlemen, Canada is no different,” he said at the international climate talks in Durban. (PHOTO BY FRANK TESTER) 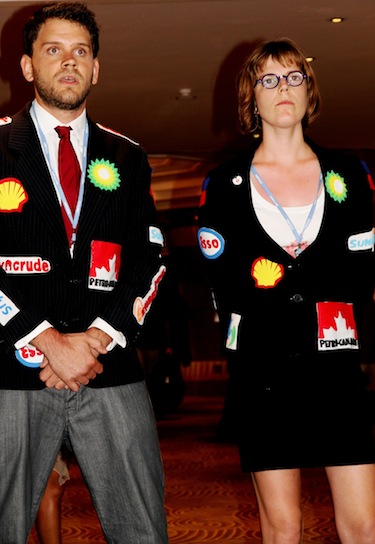 Members of the Canadian youth delegation protest the Canadian government’s negotiating position in Durban by dressing in “negotiation suits” at Environment Minister Peter Kent’s press conference on Dec. 5. Wearing jackets covered in logos from Canadian oil and gas companies, they said Canada’s position at the climate change talks is designed to protect the interests of the oil and gas industry and the development of Alberta’s tar sands. (PHOTO BY FRANK TESTER)

DURBAN, South Africa — The Canadian and U.S. governments were not immediately swayed Monday by China’s conditional offer at an international summit to join a legally-binding deal to reduce the heat-trapping pollution linked to global warming.

The two North American allies have dismissed the world’s existing legally-binding treaty, the Kyoto Protocol, because it requires China, the world’s largest source of greenhouse gas emissions, only to produce a national climate-change plan, without requiring the emerging economy to meet mandatory targets.

But even after the head of China’s delegation to the summit offered a list of conditions for it to join a binding treaty after 2020, the Canadians and Americans were skeptical.

“There are a number of clarifications that will be required in terms of how much they intend to be transparent in the reporting of their emissions,” said Saint-Jacques at a news conference with Environment Minister Peter Kent.

“So far this year, in all the negotiating sessions they have basically refused to live by the commitments of the Cancun agreements of last year, so [their latest proposal] could be an important development that could help to move the process [forward], but we will certainly study [it] with a lot of attention, once we can see all those details.”

Kent also immediately dismissed suggestions that having major emerging countries taking on binding targets would convince him to accept one of their conditions and agree to a new round of commitments under Kyoto after the current commitment period ends in 2013.

Canada has ratified Kyoto, but the federal government has already indicated it will not try to meet its existing targets because it believes it would harm the economy to do so. Japan and Russia have also indicated they will not accept targets in a new commitment period.

“Canada will not make a commitment to a second Kyoto period. Our fixation, our commitment is on Copenhagen and the Cancun Agreement,” Kent said in Durban. “We believe that ultimately, a new agreement that includes all of the world’s major emitters in both the developing and the developed world is the only way to materially reduce annual megatonnage to the point that we can work to prevent the global warming hitting or exceeding two per cent.”

NDP environment critic Megan Leslie said that Canada should follow China’s lead, rather than become the first country to pull out of Kyoto.

“China’s willingness to enter into a legally-binding agreement is a breakthrough. The argument that China isn’t doing anything — well, that’s gone and I’m left to ask, what’s Canada’s excuse now?” Leslie said.

She said the NDP wanted to see Canada and all major emitters agree to binding emission targets, rather than sign a non-binding agreement that the Tories have said they are interested in signing.

“I’d like to enter an agreement where it’s not binding. It’s a bit of a joke and it’s a line they’re giving us to distract away from the issue,” she told reporters in Ottawa.

At a news conference earlier in the day, the head of the Chinese delegation, Xie Zhenua, said nations would need to respect a founding principle of the existing international climate agreements that recognizes industrialized nations must do more than their counterparts since they are responsible for most of the pollution that is trapping heat in the atmosphere and causing global warming.

“China has really expressed its stance on many negotiating occasions and as I said, just now, very clearly, we accept a legally-binding arrangement, with [these] conditions,” said Xie, speaking through a translator.

He said the Chinese government also wanted developed countries to proceed with a second round of commitments under the Kyoto Protocol as well as honouring pledges to invest hundreds of billions of dollars over the next decade into a green climate fund to support developing countries.

“All countries can take over obligations and responsibilities based on their respective capabilities” he said. “And China would like to join a legally-binding document which fulfils the above mentioned conditions.”

South Africa’s International Relations and Co-operation Minister Maite Nkoana-Mashabane, who is chairing the climate summit, said the statements made by China and some other countries are positive and show that negotiators have made progress in the first week of the conference.

“What pleases us is that delegations are laying out, right at the outset, what they consider to be important,” she said.

But the lead U.S. lead negotiator said he wasn’t sure China and other major emerging economies are prepared to accept making commitments that are not tied to transfers of technology and funding.

“There’s no Swiss cheese in that kind of a [legally binding] agreement,” said Todd Stern, the U.S. special envoy on climate change. “I don’t know what [Xie] is saying yet . . . I’ll talk to him tomorrow [and] I’ll let you know.”

But a representative of African nations said all major developed economies must work harder to deliver new commitments under the Kyoto Protocol, equivalent to about a 40 per cent reduction in greenhouse gas emissions over the next five years.

“This is not something I invented [and] I’m not trying to be creative,” said the chair of the African group, Tosi Mpanu-Mpanu. “This is what the science tells me.”

He also said that countries which abandon existing commitments under Kyoto would lose the credibility and trust of others, including on financial matters.

Meantime, representatives from the European Union stressed that they were the only group of nations with legally-binding domestic legislation to achieve the pledges they have made and will meet in the future.

Kent, who confirmed details of Canada’s “fast-start” financing for developing nations, also said that all delegates at the conference are united with the goal of preventing dangerous human interference with the atmosphere and climate.

With files from Jordan Press