An unsung refugee who changed the North dies at 89 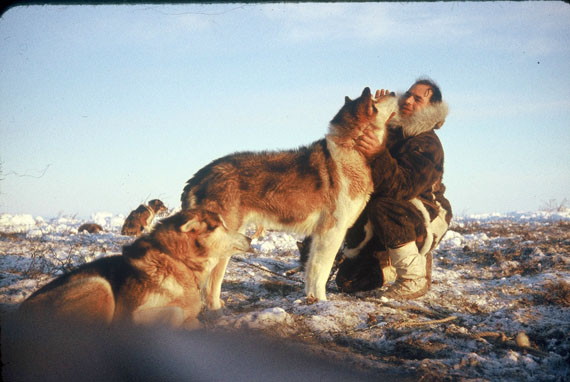 Gunther Abrahamson in 1961, with a dog team near Aklavik. (PHOTOGRAPHER UNKNOWN) 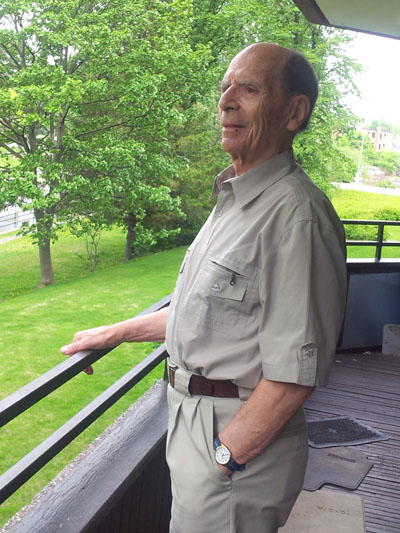 Gunther Abrahamson in May 2014, at his home in the Glebe neighbourhood of Ottawa. (PHOTO BY MARION SOUBLIÈRE) 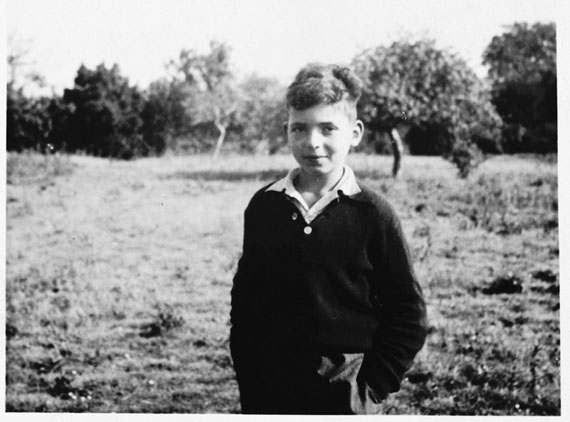 Gunther Abrahamson in a photo taken some time between 1939 and 1942 by his lifelong friend, Netta Pringle, at The Priory, a children’s home in Selkirk, Scotland where he lived after his escape from Germany on the Kindertransport in 1939. (PHOTO FROM UNITED STATES HOLOCAUST MEMORIAL MUSEUM, WASHINGTON, D.C.) 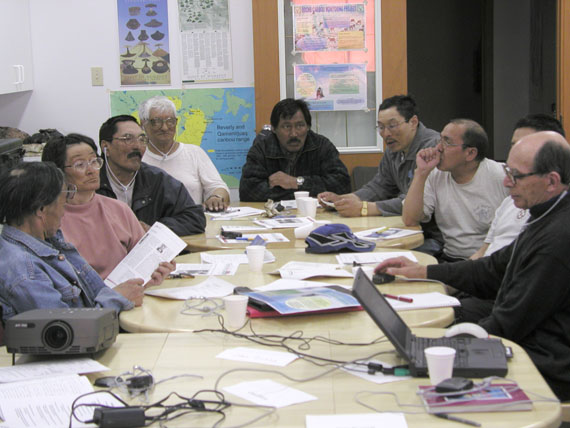 From a May 2002 meeting of the Beverly and Qamanirjuaq Caribou Management Board in Baker Lake, from left to right: Baker Lake’s Harold Elegoyoak, Susan Toolooktuk, Joedee Joedee (HTO vice-president), Norman Attungala, David Aksawnee (HTO president), Phillip Putumiraqtuq (HTO secretary-treasurer), Thomas Kudloo and, on the far right, Gunther Abrahamson, who served for many years as secretary to the board. (PHOTO BY GARY KOFINAS)

It was on July 13, 1939, on a continent gone mad, that a little German-Jewish boy from Berlin named Gunther Abrahamson, aged 12, last saw his mother.

He thought it was all a great adventure. He thought that in just a few weeks he would see her again at their family apartment on 21 Heilbronner Strasse, a quiet tree-lined street in Berlin’s Schoneberg district.

He was too young to know the Kindertransport train he was about to board would save him from extermination and lead him towards more than six decades of vital but unsung service to the people of the Canadian Arctic.

That journey ended this past April 8, when Abrahamson, 89, long retired from the federal civil service, died at his home in Ottawa.

“It’s a big loss. He was one of my key mentors. I loved the man dearly, actually. It’s a big loss,” said Peter Usher, an environmental consultant and professor who has worked for Inuit Tapiriit Kanatami, Makivik Corp. and numerous other Aboriginal organizations.

The other is the part he played in the creation of the Beverly and Qamanirjuaq Caribou Management Board in 1982, where he served for 23 years as the board’s secretary-treasurer and its sole employee.

That body — which brought Aboriginal people together with scientists, and officials from two provinces and the territories — pioneered the idea of wildlife co-management well before the settlement of Aboriginal land claims in the territories.

“I think Gunther was really instrumental in getting that board established. In terms of wildlife co-management, he has a big place,” Usher said.

Abrahamson, a quiet, dignified introvert, sought no praise or recognition and it was in that spirit that he influenced the cultural and economic development of the Northwest Territories and Nunavut from the early 1950s until his death.

“We had our differences, but he was sincere and honest and he didn’t bullshit anyone. He didn’t seek any glory or recognition,” said Louis Tapardjuk of Igloolik.

“He was someone who helped the co-ops get funding for using the co-ops to promote Inuit art,” Tapardjuk said.

For his contributions to that and many other projects, including Inuktitut magazine, the Inuit Cultural Institute, the development of a syllabic ball for the IBM Selectric typewriter and the promotion and cataloging of Inuit art, Abrahamson let those working under him take all the credit.

And when the sons of Barry Roberts, a former northern affairs employee and contract consultant for the department, formed a company called Nortext, he supported the firm by funding their publication of the newspaper Igalaaq, starting in 1978.

That led to Nortext’s acquisition, in partnership with Nunasi Corp., of Nunatsiaq News in 1985. Now the sole owner, they’ve published Nunatsiaq News continuously ever since.

“To revel in his companionship was to be transported into little-known times and developments in Canada’s North. But more than anything, Gunther was a kind man who thought of others first and was modest to a fault,” said Marion Soublière, an Ottawa writer and editor who for many years knew Abrahamson through the Beverly and Qamanirjuaq Caribou Management Board.

He rarely talked about his private life. Even Abrahamson’s closest associates did not know he was an orphaned refugee who had escaped the Holocaust.

“Very few of the people who worked for him knew his story. Very few people went to Gunther’s home. In fact, people who knew Gunther for years didn’t even know he was married,” said John MacDonald, a veteran civil servant who worked many years for the federal and Nunavut governments.

Abrahamson, whose name was first spelled Günther Abrahamsohn, was born Oct. 27, 1926, in Berlin to Wilhelm and Katharina Abrahamsohn.

After his father, a prosperous but troubled lawyer who served in the First World War, died by suicide in 1932, Gunther moved with his mother and sister Daisy to 21 Heilbronner Strasse.

On Nov. 9, 1938, that terrible night known as Kristallnacht, or Night of the Broken Glass, widely considered to be the beginning of the Holocaust, persecuted Jews hid from the Gestapo inside that apartment.

Before it was over, Brownshirt thugs who belonged to a Nazi paramilitary organization called the SA had destroyed synagogues, cemeteries and Jewish businesses across Germany and arrested 30,000 Jews for transportation to concentration camps.

“And I remember Kristallnacht. The Gestapo came and I don’t know who else, and they arrested men, young men and old men. And our apartment was full of young men, they were hiding there. I thought this was a great adventure,” Abrahamson is quoted as saying in a family album prepared in 2012 by Simon Löber, a German writer.

Three days earlier, on Nov. 6, 1938, sister, Daisy, 17, travelled by rail to Trieste, Italy, where she boarded a ship that took her to Palestine. Gunther did not see her again until 1952.

Meanwhile, Katharina Abrahamsohn made plans to move her youngest child to a safe country. She arranged a place for him on the Kindertransport, a rescue campaign based in Britain that saved the lives of nearly 10,000 Jewish children from Germany, Austria, Poland and Czechoslovakia.

On the morning that he left Berlin, Katharina told her son to be a good student and learn well. Not yet 13, he took shoes, a brush, and his clothes, into which his mother had sewn his name.

But she couldn’t bear to take her son to the train. A man named Georg Eherenfried, who was involved with Katharina in a relationship, took Gunther to Berlin’s Friedrichstrasse station.

The quiet 12-year-old did not yet know he was a refugee. He thought he would see his mother in a few weeks, after his holiday was over.

Nazi authorities arrested Katharina on Jan. 25, 1942 and sent her to a concentration camp in Riga, Latvia, where she died. Georg Eherenfried fled to Switzerland.

“Today’s stark crisis of refugees escaping war to relocate to new countries and cultures could just as easily be a scene in England, in 1939, when both the German language that we spoke and unusual clothing that we wore were unusual to local citizens,” Abrahamson wrote in December 2015.

“Hopefully, countries around the world will continue to accept refugees.”

Thirty-six hours after departing Berlin, Günther landed at a transit camp near Ipswich, England, and travelled by train with two other boys to Selkirk, in southeast Scotland, where he stayed at a children’s home called The Priory with 21 other Kindertransport children.

There he met Netta Pringle, a matron’s assistant at the Priory with whom he formed a lasting friendship and who visited him later in Canada when he lived in the western Arctic.

At 16, he left The Priory to stay with the Millar family, who lived on a farm near Selkirk and in 1946, Gunther began studying agriculture at the University of Edinburgh, graduating in 1952, the year he travelled to Canada.

He worked for a mining company in Yellowknife and soon after landed his first job with the federal civil service: at the now abandoned community of Reindeer Station, NWT, just north of what is now Inuvik.

There, he managed a herd of about 10,000 reindeer that the federal government later transferred to William Nasogaluak’s family. By then he had changed the spelling of his name to Gunther Abrahamson.

On Dec. 3, 1960, in Tuktoyaktuk, he married Inge Hamann, a dental surgeon who had emigrated to Canada from Germany in 1959. The Roman Catholic priest who married them had to get permission from his bishop to perform the ceremony, given that Inge was a Protestant and Gunther was a Jew. Their marriage lasted nearly 55 years.

In 1961, Abrahamson worked with Peter Usher, then a young student from McGill University, on an economic survey of the area between Cape Parry and Tuktoyaktuk.

“That was my introduction to the North and he was an absolutely fantastic person to work for. I hardly think of him as a boss, as such. He was a wonderful man to travel with. It was kind of free and easy,” Usher said.

In the early 1960s, Abrahamson was promoted to chief of the social and cultural development division, a position he held until his retirement in the early 1990s.

“He inspired tremendous loyalty among people who worked for him. People would work weekends and nights for him and he didn’t demand it. It was something about this person who made people this way. He was never the kind of boss you feared. There was a lot done that is still being built on today,” John Macdonald said.

Of all the projects that Abrahamson worked on, it was the Beverly and Qamanirjuaq Caribou Management Board that he was most proud of, Marion Soublière said.

“He often said that the BQCMB’s biggest accomplishment was establishing communication across various groups. At the end of the day, he would say of board members, we are all friends.”

“I will miss Gunther and his friendship enormously. I’ll carry his voice with me always,” Soublière said.

Abrahamson is predeceased by Inge, who died in 2015, and by sister Daisy, who died in Tel Aviv in 2013. He is survived by numerous extended family members in Israel and by his numerous friends in Ottawa and northern Canada.

Abrahamson left instructions that no obituary be written after his death, which Abrahamson’s friends advised the writer of this article to safely ignore in good conscience.

His friends have organized a celebration of life scheduled for Sat., May 14 at 2 p.m. in front of 300 Queen Elizabeth Drive in Ottawa, at the corner of First Avenue

Those who wish to make a donation in Gunther’s name can donate to the Gunther and Inge Abrahamson Fund.

Note: many of the facts in this article are taken from two sources: a family history that author Simon Löber and Gunther Abrahamson created in 2012, and a book entitled The Uprooted: A Hitler Legacy by Dorit Bader Whiteman, as well as public domain letters written by Gunther Abrahamson. For reasons of style, we have omitted normal journalistic attributions from many parts of the article.