And no sanderlings sang 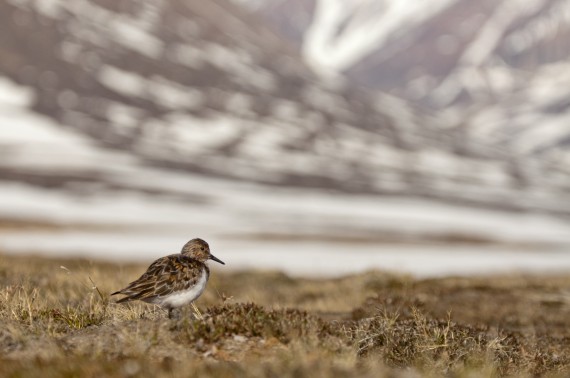 Sanderlings are shorebirds that migrate to the tundra of northeast Greenland during the summer. Late snow cover this year made it difficult for the birds to forage on insects and spiders. (PHOTO COURTESY OF JEROEN RENEERKENS) 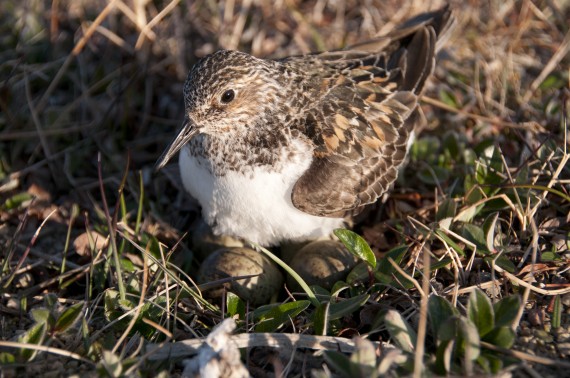 When the fog lifted on June 14, Jeroen Reneerkens’ small chartered plane could finally land on the tundra of northeast Greenland. The Dutch avian ecologist, who has a special passion for the small wading birds, especially the ubiquitous sanderlings, quickly realized that something was wrong on the ground.

By mid-June, the region’s shorebirds would normally have been brooding on nests and feeding on recently hatched arthropods—ground-dwelling insects and spiders—but this year’s landscape was still covered by snow.

The shorebirds the ecologist did see were pacing on a small patch of exposed rock just outside the Danish Zackenberg Research Station, all desperately seeking bits of kitchen waste. Reneerkens, of the Netherlands’ University of Groningen, had been warned by Danish colleagues and friends who had visited the region in 2018 shortly before about the late snow cover.

They were right. He stepped down into the lingering snow and the makings of a disaster.

On July 5, Reneerkens published an account of findings he made during his daunting and haunting 13th season at Zackenberg in BirdGuides, an ornithology journal from the U.K.: “Greenland shorebirds suffer disastrous breeding season.”

“Shorebirds are income breeders,” wrote the ecologist. “The females produce their eggs from locally acquired food.” That food isn’t available until the snow disappears.

“Very lean birds were walking between wooden buildings in the research station and could be approached up to a few metres,” he recorded. Their lack of apparent fear was likely due to an unwillingness to spend precious energy avoiding humans.

Reneerkens found two sanderlings near the station that had apparently starved to death. “One of them weighed 34 grams at first capture and only 32.6 grams when recaptured a few days later,” he wrote. A predator had apparently severed its head. The other sanderling weighed in at only 31.8 grams.” (Depending on the date, location, weather, food supply and other factors, a healthy sanderling would be about the weight of an incubating bird on a nest, which is, on average, 57 grams.)

“During the two-week period that I was in Zackenberg, I did not hear a single singing sanderling and only a few times did I hear a singing red knot or dunlin,” Reneerkens wrote in BirdGuides. “Also a few flocks of 20-30 red knots and sanderlings were observed heading south at fairly high altitude, suggesting that birds had given up on reproduction this year.

“Unusually large numbers of red knots and sanderlings have been reported in the UK, Netherlands, Germany and Denmark in late June and early July.”

In fact, Reneerkens writes that most of the shorebirds probably didn’t even reach the Zackenberg site, but remained to the south where the food was more readily available.

The Dutch scientist had flown north in June not to study starving birds and snow cover, but rather to explore the relationships of shorebirds such as sanderlings with local food abundance and predators like Arctic foxes and gyrfalcons. But it is becoming more obvious that nothing can be counted on in an age of rapid climate change.

The obvious is not all that obvious, which is why some observers call the changes “global weirding.”

The Arctic is indeed warming, but a subsequent rise in precipitation in the form of winter snow can “counteract the effects of warming summers on the timing of arthropod emergence,” wrote Reneerkens.

The ecologist added in an email that spring shorebird feeding and breeding problems are being reported elsewhere in the North as well, though apparently the situation there isn’t yet as severe as that in northeast Greenland.

“Paul Smith of Environment and Climate Change Canada reported that this year, due to late snow melt, he recorded only less than half of the shorebird densities in his research area on Southampton Island compared with previous years,” Reneerkens wrote.

“Although not Canada, a similar situation (much snow that took too long to melt) has been observed in Alaska this year by my colleagues Bart Kempenaers and Martin Bulla,” Reneerkens added. “Shorebirds bred up to a month later and in much lower numbers there too.”

He went on to stress that “in all these cases across the Arctic, ground-breeding shorebirds are negatively affected by snow-covered tundra in summer, when they are supposed to lay eggs and incubate them, because the late snowpack seals the birds off from food and nesting sites.”