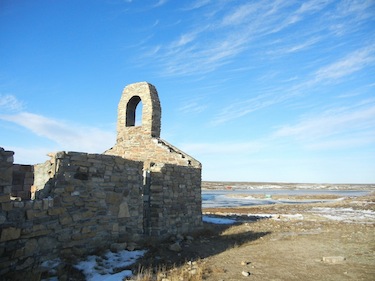 The front of the stone church built by Father André Steinmann in 1954 faces the old town site of Cambridge Bay, later moved to a site across the bay. (PHOTO BY JANE GEORGE) 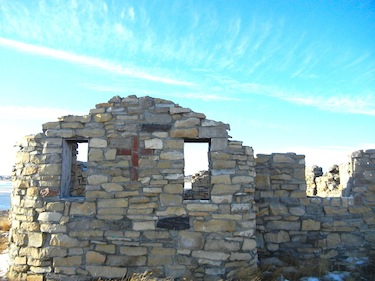 Father André Steinmann worked with his fellow missionaries and locals to build the stone church in Cambridge Bay, seen here from the back — after a 2006 fire, only its walls remain. (PHOTO BY JANE GEORGE) 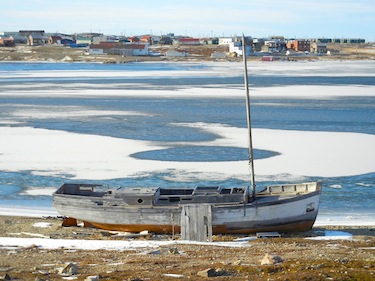 This is how the Eagle, brought to Cambridge Bay in 1954 by Father André Steinmann looks today. (PHOTO BY JANE GEORGE)

But there’s a little-known connection between these two Arctic communities that links their histories.

The noted missionary Father André Pierre Marie Steinmann served in each place and in each community he left a legacy still visible today.

In Cambridge Bay, a wrecked boat and a roofless stone church are all that appear to remain of Father Steinmann’s two years in the Western Arctic.

However, in Puvirnituq, its flourishing co-op store directly reflects the 25 or so years that Father Steinmann, originally from France and a member of the Oblate Fathers, spent in the community.

Father Steinmann is better remembered by people in Puvirnituq as Umikallak, the man with the “cute short beard.”

There, during the 1950s and 1960s, he worked to establish the Povungnituk Sculptors Society, the forerunner of today’s co-operative network of stores, hotels and other businesses in Puvirnituq and Nunavik.

What remains of Father Steinmann’s presence in Cambridge Bay, where the missionary, then in his early 40s, spent two years from 1953 to 1955, is not as immediately impressive today.

Their materials: seal oil and clay as mortar and broken rocks — plentiful around Cambridge Bay.

Built to be warm, with an insulating layer of caribou fur between two stone walls, the church opened Sept. 14, 1954, with nine parishioners in attendance.

And, since then, the years have not been kind — after several attempts to reconstruct the crumbling structure (not easy because of the original mortar used), vandals set fire to the church on April 26, 2006.

While the interior burned completely that day, snow still clung to the outside as the fire blazed, unmelted, due to the insulation from double walls and furs.

Although the church’s outside walls are still stable today, it lacks a roof, and there’s little talk now of restoring the church to its former state.

A sign near the ruins continues to offer a brief history of the church, a popular point of interest for visitors to the community.

But the stone church isn’t the only legacy of Father Steinmann to be found today in Cambridge Bay.

In 1954, Father Steinmann purchased the Eagle, a small longline fishing boat, said to have been towed from Tuktoyaktok to Cambridge Bay, leaking all the way.

By the time the Eagle arrived, Steinmann had left for northern Quebec, where he had already spent the years between 1938 and the early 1950s, in Wakeham Bay (now Kangiqsujuaq), Sugluk (now Salluit) and Koartak (now Quaqtaq).

There’s no record of what he intended to use the Eagle for, so the boat stayed on the beach, not far from the semi-submerged hulk of the Maud, once sailed by Norwegian Roald Amundsen, the first European adventurer to successfully voyage through the Northwest Passage.

In Puvirnituq, then called Povungnituk or POV, Father Steinmann and Pitaaluk, the tall, Inukitut-speaking Hudson Bay Co. manager Peter Murdoch, worked with Inuit living in camps around today’s community to set up a new way of trading and buying goods — which would eventually grow into today’s co-operatives in Nunavik and serve as an inspiration to those in Nunavut.

During the 1950s and 1960s, Father Steinmann encouraged artists such as the great artist Davidialuk Alasuak to portray Inuit legends and humour in his carvings and prints.

Father Steinmann’s cramped quarters were said to be crammed with “mythological carvings and humorous nudes.”

Some say Father Steinmann’s earthiness was intended to draw Inuit away from the straitlaced Anglicans to Catholicism.

During the 1960s, Father Steinmann also worked to set up a print shop as well as a doll-making venture with Alasi Alsuak, his housekeeper.

And Father Steinmann used his French-speaking connections to forge links with Quebec’s Caisse Populaire Desjardins co-op movement and to see a locally-built airstrip laid down in POV in 1968.

“He [Steinmann] and Pete Murdoch and Inuit spokesmen like Paulasi Sivuak were like a team of preachers of some new cult, spreading the word not only in POV but other villages in Nouveau-Québec, many of which soon founded their own co-operatives.

Their motto was ‘iminik imirgurkuk’Inuit by their own efforts succeed,” Graburn noted.

When Father Steinmann retired in the mid 1970s, he was known more for his success as promoter of arts than as a missionary, sailor or builder of churches.

Father Steinmann never returned to Cambridge Bay. He died in 1991.

If he could visit Cambridge Bay now, he might be surprised to see his boat, wrecked, and his church in ruins.

But he’d also find a growing community with a strong co-operative of its own, under the Arctic Co-operatives — which grew out of the same co-operative spirit as Nunavik’s Fédération des coopératives du Nouveau-Québec as well as a small, but thriving Catholic congregation, “Our Lady of the Arctic,” with its own church, built before Father Steinmann’s church burned in 2006.