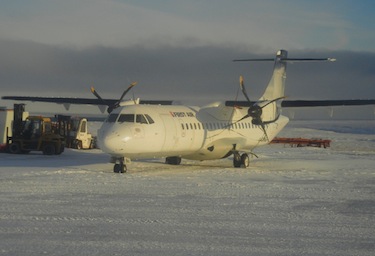 This First Air ATR is grounded at the Cambridge Bay airport while it waits for repairs to its damaged blade. The occurrence report for Oct. 10 says that “the First Air ATR-72-212, C-GRMZ, was on the landing roll-out on Runway 31T at Cambridge Bay when the aircraft veered sharply to the left. The aircraft departed the runway surface and damaged a runway light before the crew regained directional control and returned to the runway. After shutdown on the ramp, all 4 blades on the LH propeller were found to have sustained significant rock damage, and will be replaced. A preliminary inspection did not reveal any other apparent damage to the aircraft.” (PHOTO BY JANE GEORGE)

CAMBRIDGE BAY — Airlines that serve Cambridge Bay and their passengers are eager to see the Cambridge Bay airport runway paved after yet another aircraft suffered damages this past week during landing.

On Oct. 10, a First Air ATR was damaged during landing when gravel, thrown up in a mix of snow from the runway, hit a propeller.

The Civil Aviation Daily Occurrence Reporting System says that, as it landed, the aircraft veered sharply to the left, departed the runway surface and damaged a runway light before the crew regained directional control and returned to the runway.

Later, all four blades on the left propeller were found to have sustained “significant rock damage, and will be replaced.”

Cambridge Bay is one of only two gravel runway airports left in Nunavut with jet service.

A similar incident on landing damaged a 737 combi jet last May in Cambridge Bay.

Despite runway maintenance, these incidents occur every year and “the aircraft get banged up,” Philips said.

Overall, the cost of the short-term improvements needed at the airport in Cambridge Bay has been pegged at $34.4 million.

However, the Cambridge Bay ATR incident wasn’t the only near-disaster faced by aircraft in Nunavut this past week.

A look at the Civil Aviation Daily Occurrence Reporting System for Oct. 9 reveals that a First Air ATR reported a green laser was aimed at the cockpit while the aircraft was landing in Iqaluit Oct. 9.

Lasers can cause temporary flash blindness to a pilot, and pointing lasers at aircraft has resulted in arrests, trials and jail sentences in other jurisdictions.