“Now when I see people doing it, I tell them not to vandalize” 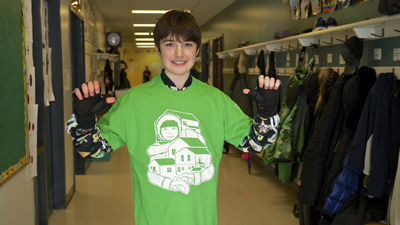 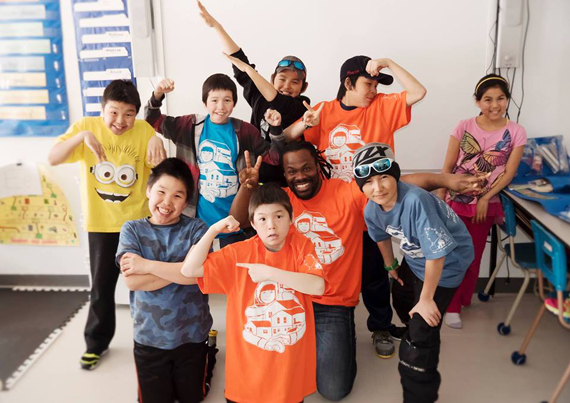 Yves Soglo, aka Shatterstar, centre, poses with a group of students from Ulluriaq school in Kangiqsualujjuaq, where he recently helped to launch the KMHB’s Say No To Vandalism campaign. (PHOTO COURTESY OF KMHB)

Imaapik Brazeau says he’s used to seeing buildings in his hometown of Kangiqsualujjuaq looking a little run down; broken glass at the arena, doors that no longer open or graffiti on the walls of local homes and businesses.

But when Brazeau saw images of that vandalism captured on film, from his own community and others in Nunavik, it made him think.

“Now when I see people doing it, I tell them not to vandalize,” said Brazeau, a grade 6 student. “Sometimes, they even do it again. If you know who it is, you can tell their parents.”

The Kativik Municipal Housing Bureau’s Pivallianiq program launched a Say No to Vandalism campaign last year, which it’s been rolling out in different communities.

The program sends streetworkers like Yves Soglo, aka Shatterstar, in to work with local youth to build a sense of community pride, through different sports and cultural activities.

Streetworkers also helps produce a local video, or documentary, on the community, hearing from local people about what issues they struggle with, and how they’re tackling those issues.

“Seeing the vandalism visually, it makes them reflect on things going on in their community and the changes they want to make,” Soglo said.

That’s what Soglo has been working on with Brazeau and other youth from Kangiqsualujjuaq through the month of March. As a starting point, he showed them videos he helped produce in both Salluit and Kangirsuk earlier this year.

In the short film “I Love Kangirsuk,” Grade 2 teacher Maggie reflects on images of broken glass outside a local building.

“I hate seeing vandalism,” she said. “I love my home and it’s dreadful to see this is in our own home.

“What I think is that youngsters of Kangirsuk who vandalize are broken in side, themselves,” Maggie says.

“When someone is broken, they feel like saying all kinds of things and this is the way they express themselves.”

With that in mind, Soglo said his goal has been to gather young people together and give them a positive platform to express themselves.

Since the beginning of March, Soglo has spent each day at Ulluriaq school organizing workshops that build civic responsibility; some even touch on issues like bullying or drinking and driving.

Sometimes Soglo switches gears and organizes a hockey game. In other communities, he and his fellow streetworkers have started performance groups.

In the evenings, Soglo spends time at the local youth centre, coordinating hip hop performances with an Inuit twist — throatboxing, a percussive form of throatsinging.

Those performances will be featured in Kangiqsualujjuaq’s video, which should be completed by the early fall, he said.

Both the films “I Love Kangirsuk” and “I Love Salluit” has attracted thousands of views on Pivallianiq’s Facebook page, and Soglo expects the films attract even more attention as each community produces its own video.

The hope is to get Nunavimmiut talking, he said.

“I’ve spoken to teachers in Kangirsuk who’ve seen a huge difference,” he said. “They say they’re seeing a real sense of pride and empowerment.”

At Ulluriaq school, Brazeau will tell you it’s the streetworker that’s made the difference.

“He’s very caring and helpful,”Brazeau says about Soglo. “Lot of people like him, so maybe he’s going to help Kangiqsualujjuaq.”

The KMHB originally launched Pivallianiq in 2011 to build tenant pride and encourage Nunavimmiut to take better care of their housing units.

In recent years, the program has put a focus on youth in the region. In 2015, its Say No To Vandalism program will focus on three communities: Kangiqsualujjuaq, Akulivik and Tasiujaq.

Youth in all three communities have also been receiving the new campaign t-shirts, offered in bright colours with the image of a person hugging their home.