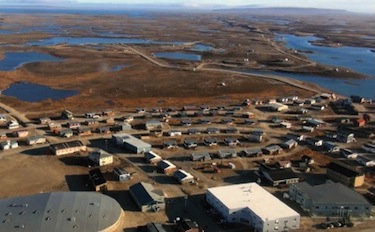 In this photo from the CHARS community consultation document prepared for Cambridge Bay, you can see the site for the research facility to the back of the community. During the CHARS June 11 evening community consultation, Donald McLennon, head of monitoring science on the project, talks about the CHARS design to two of the 30-plus people who attended the session. (PHOTO BY RED SUN PRODUCTIONS)

People in the western Nunavut community of Cambridge Bay got a sneak peek this week at what the Canadian High Arctic Research Station will look like: a complex of buildings designed to make the most of its location and traditional knowledge and science.

The good news: CHARS is still on target to open in July 2017, just in time for the 150th anniversary of the Canadian federation.

But, during updates from the station’s architects and representatives from Aboriginal Affairs and Development Canada, it became clear again that the CHARS isn’t just about building designs or research projects for people who live in Cambridge Bay.

It’s also about jobs and money: Ottawa plans to spend $188 million on CHARS and its science and technology program — a lot of cash for a town of 1,600.

For now, plans for CHARS will see 33 permanent staff and up to 150 more hired on seasonally.

But that could change. That figure of 33 is down from a previous estimate of up to 50 full-time jobs, people in Cambridge Bay learned at a project updates held in the community June 11.

CHARS’ two first hires — the future office co-ordinator and the head of monitoring science on the project, have been from the outside. That prompted some at a June 11 evening public meeting to question whether Inuit will be hired.

CHARS plans to open an office this summer, which will be temporarily located at Nunavut Arctic College and staffed by Meghan Bennett, the wife of an RCMP member coming to the community from Iqaluit.

As for work associated with the $142.4 million CHARS construction, a yet-to-be-announced project manager plans to hand out contracts for local projects.

This plan was challenged by one man, who attended the June 11 evening meeting for members of the public.

“You are saying the construction manager may hire local, but on every site here we see only southerners,” he said.

However, CHARS architect Alain Fournier said the goal is to hire locally as much as possible: “Will we be successful? Not always.”

A brown cardboard mock-up of CHARS was also prominently on display at this week’s meetings on Cambridge Bay.

This maquette showed the layout of CHARS, which will overlook Cambridge Bay from the plateau on the north side of town and lie off the road leading to Mt. Pelly.

In front of the main building, a 4,500-sq. metre main building about one and a half times larger than the community’s Kiilinik High School, builders will install experimental windmills.

A smaller 1,500-sq. metre maintenance and field building will face that main building, but separated by marshalling yard for all-terrain vehicles or snowmobiles preparing for research trips out on the land.

“It will be an interesting site — people will be interested in seeing what’s going on,” promised Fournier, whose company Fournier, Gersovitz, Moss, Drolet et associés, has designed air terminals in Iqaluit, Kuujjuaq and Puvirnituq, Nunavik child care centres, as well the community science centre in Kuujjuaraapik.

Inside the main building there’s also large central room where a qajaq will be hung — a symbol of the melding of traditional knowledge and design CHARS wants to strive for, Fournier said.

And there will also be offices, as well as a “business incubator space” — available for rent to some local business — and upstairs more offices and laboratories.

A path leading over wetlands will end up in Cambridge Bay.

Two triplex housing units are in the works, and, sometime after 2017, the construction of a much larger 80-person dormitory and an “international expansion” of workspace.

CHARS is still a work in progress, said Fournier, who told the 40 people at the evening public meeting in Cambridge Bay that he wanted their opinions and comments “so we can incorporate them into the different stages of our work” — a repeat of the message he also delivered in September 2012.

While updating people in the community about CHARS at several meetings during the day of June 11, Fournier repeated several times that members of the public will be welcome in almost every area of the complex — it will be “a place to feel welcome.”

They can hold meetings in the central entrance “qaggiq” area and cafeteria. Or they can sit in the spacious corridors designed to be a bit like “winter gardens.”

“CHARS is not just a place where scientists meet. CHARS is open to the public,” he said.

The design calling for several buildings, which will be built in stages, allows for more flexibility, and to test new technologies, he said.

As for the incorporation of Inuit traditional knowledge, the Inuit Qaujimatuqaagit planning principles used in the design include piliriqatigiingniq (collaborative relationship).

As an example of avatimik kamattiarniq, Fournier described how the path through the wetlands will be a kind of “living experiment,” which will respect the tundra.

Many in Cambridge Bay were keen to see the design for CHARS, and some had comments.

Stephen King, the hamlet’s senior administrative officer told Nunatsiaq News that he liked what he saw: “I feel the CHARS design team has done a great job incorporating community interests and Inuit traditional knowledge into the design.

“They have gone to great lengths to speak with community members to get ideas to incorporate into the design.”

with files from Cambridge Bay 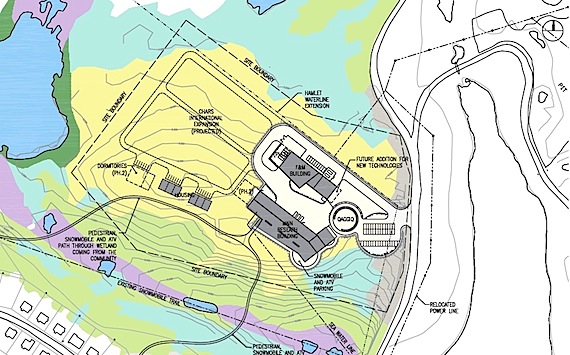 In this map from the CHARS community consultation document, you can see how the various buildings will be laid out.