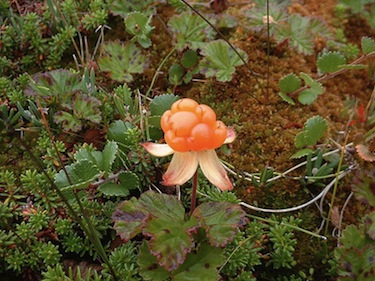 The Arctic aqpik may hold the secret to diabetes prevention or even reduction, new research from Laval university suggests. (FILE PHOTO)

OULU, FINLAND — Worried about diabetes? You might just want to get yourself a bowl of aqpiks (cloudberries) or some other local Arctic berries.

That’s because research by Laval university’s health expert André Marette suggests that Arctic aqpiks, among others, increase healthy microbes in your intestines and can prevent or even diminish the symptoms of diabetes.

If this surprises you, Marette said the main medicine used to fight Type 2 diabetes is actually derived from lilacs.

What if Arctic berries, which proved their potency in Marette’s studies on mice reverse or prevent diabetes among Inuit?

A “good-sized portion” of berries a day could be all you need, Marette said, adding that Laval hopes to get funding for a $100-million project called Sentinel North, which would look at the relationship between human health and nature in the Arctic.

And the more local the berries are, the better they are, Marette told a group of doctors and medical researchers meeting in the Arctic Finnish city of Oulu June 8 before the 16th International Congress on Circumpolar Health gets underway there June 9.

The group’s goal: to start an Inuit-specific diabetes network, stretching from Alaska to Greenland, which would enable the sharing of knowledge on diabetes and become an essential tool to fight “an evolving epidemic.”

Inuit know diabetes as “timi siuraujaartuqaluartuq” or “sukaqaluartuq,” which means “too much sugar within the body.”

Diabetes develops when the body can’t process sugars properly, leading to high levels of sugar in the blood. Diabetes can lead to heart attacks, nerve damage, kidney disease and blindness.

Diabetes rates are now generally low among Canadian Inuit and the most recent statistics show that less than three in 100 Nunavummiut have diabetes.

But the recorded number of Greenlanders with diabetics has grown with better screening. Health Canada also predicts that diabetes will increase in Canada’s Arctic regions.

An Inuit diabetes network could be a first step in understanding whether it’s the Arctic diet or genetics that protects Inuit from diabetes — or at least when people remain active and eat a low-carbohydrate, traditional diet.

Genetic studies show that Inuit in Alaska, Nunavik and Greenland share a genetic link that keeps higher blood sugar overall. This would be helpful if you had to go without food for a while.

Greenland and Alaska sent top medical officers to the discussion on establishing the diabetes network, while key Nunavik researchers were also present.

Health Minister Paul Okalik and other Nunavut government staff are representing Nunavut, but did not attend the meeting.

But Dr. Pamela Orr, an internist who visits Baker Lake, said diabetes in Nunavut is “big.”

As well, a woman who had previously worked in health in Nunavut told those at the discussion that she feels diabetes is not on the top of the list of the GN or even of people in the communities, who may have more pressing issues, such as suicide or accidental death, to deal with.

They suggested the network also include a focus on the Canadian Arctic’s nutrition crisis and the health of children.

And they mentioned how many Nunavut children are obese, malnourished and at higher risk of diabetes, all at the same time.

Efforts at more discussion on good nutrition and food security could help some deal with the trauma of past periods of starvation and understand that today, having a fat child isn’t a prevention against diabetes or being malnourished.

Other groups meeting before the start of the health congress, which last took place three years ago in Fairbanks, Alaska, looked June 8 at how to tackle tuberculosis and other infectious diseases around the circumpolar world.

When the meeting gets underway June 9, some 200 participants will discuss topics that will include indigenous health, contaminants, mental health, accidents and injuries, women’s health.

Inuit Tapiriit Kanatami, the Nunavik Regional Board of Health and Social Services, Qaujigiartiit Health Research Centre and researchers who have worked in Arctic Canada are among those scheduled to make presentations.

For more from the conference look later on Nunatsiaqonline.ca.