“Char have been proving people wrong for a long time” 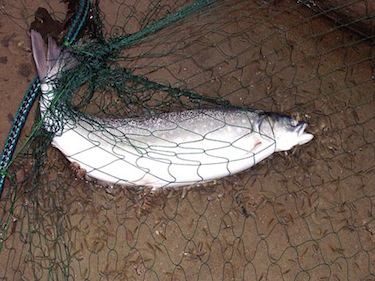 Arctic char move around a lot in the waters around Iqaluit — before they end up in a net. Tagging of char shows that some move at speeds up to 9.5 km/hr. (FILE PHOTO) Fisheries and Oceans Canada and the Amarok Hunters and Trappers Association plan to draw up a char management plan for the Sylvia Grinnell River near Iqaluit. (FILE PHOTO)

There’s a lot about Arctic char that might be familiar to Inuit but still baffles scientists.

But a Dalhousie University researcher says he’s filled some of that knowledge gap after two summers of tagging char in and around Frobisher Bay.

Aaron Spares, a PhD candidate at the Halifax, NS university and a member of the Ocean Tracking Network, a $168-million project aiming to improve science’s sometimes spotty understanding of what goes on beneath the surface of the sea.

That goes for char too. During a lecture at the Nunavut Research Institute in Iqaluit Sept. 19, Spares said many elements of char behaviour are still unclear to scientists.

“Char have been proving people wrong for a long time,” he said.

Over two summers, Spares tagged more than 60 char at the Sylvia Grinnell River and the mouth of the Armshow River, also known as Bay of Two Rivers.

He then set out an array of computerized receivers that registered every time a tagged char swam past.

The data provides a new picture of how char move around what Spares called inner Frobisher Bay, the part of the bay above the Channel Islands.

But their movements can be erratic. One fish, nicknamed Righty-Oh, travelled five times between the top of the bay and Sylvia Grinnell, disappeared for three weeks, showed up at Bay of Two Rivers for nine days, disappeared again, then turned up in a lake on the Armshow River on Sept. 4.

The tags also recorded the speed at which char swim. Spares found they average a fairly lazy pace of just under one kilometre per hour, but that they can hit a top speed of 9.5 km/h.

That rate of travel is all the more impressive, Spares said, considering how the fish came by the name Righty-Oh. “He was missing a fin. That (rate of travel) is pretty good for a crippled fish.”

Spares’ research also revealed a pattern of diving in salt water by char that was previously unknown to science, he said. The fish dive deep into subtidal waters and then back near the surface repeatedly.

Spares said char are likely chasing food into deep water then returning to the surface where the warmer water helps speed up the digestive process.

Char are well-known gorgers. They only feed for about two months in the summer and eat very little the rest of the year.

That’s why they often strike at fishing lures, even when their bellies are literally full to overflowing.

Spares’ findings come as Fisheries and Oceans Canada and the Amarok Hunters and Trappers Association prepare to draw up a management plan for the Sylvia Grinnell River.

Scientists from DFO have been conducting their own char tagging this summer, and that data will contribute to the management plan, said Chris Lewis, a DFO biologist.

Spares agreed, but said any management plan should err on the side of conservation.

Twenty-five per cent of char he tagged were recorded at both Sylvia Grinnell and Bay of Two Rivers.

“You have to take into account that [the fish] are moving,” he said.

Char populations are healthy now, but Iqaluit fishers harvest more than 8,000 kilograms of char every year and Spares said it could be challenge to maintain a sustainable fishery next door to a growing city of 7,000 people.