“We will take the knowledge and apply it for you and me, but mostly for the communities we live in” 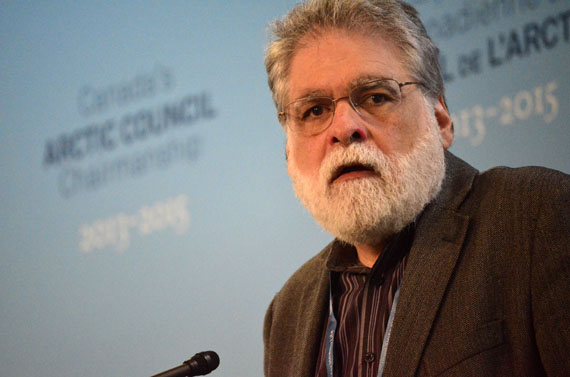 Laurence Kirmayer, the director of social and transcultural psychiatry at McGill University, said mental health workers and researchers must treat mental health not only by focusing on individuals, but also by focusing on the relationships that connect people to their families, communities and cultures. (PHOTO BY JIM BELL) 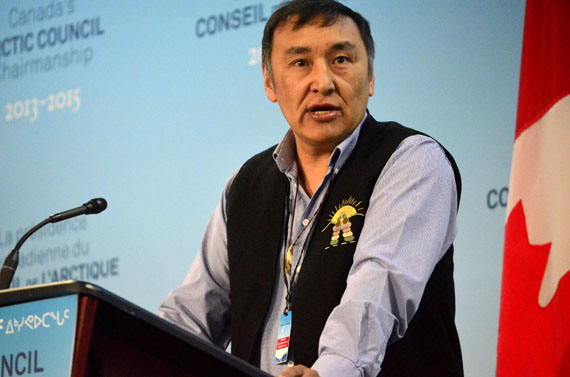 Nunavut Health Minister Paul Okalik shares his personal experiences with delegates at the Arctic Council circumpolar mental wellness symposium in Iqaluit last week. “My story is a reflection of our territory and the many challenges that we face. And yet I must say I am optimistic,” he said. (PHOTO BY JIM BELL) 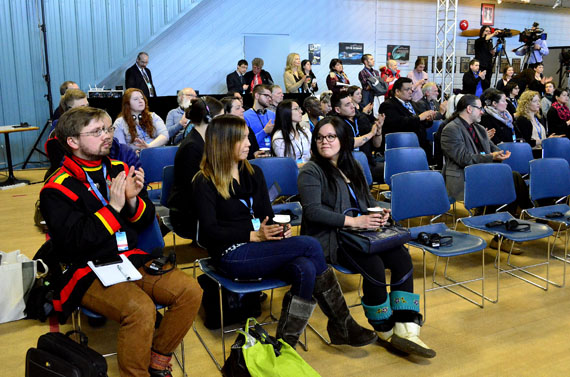 Delegates attending the Arctic Council circumpolar mental wellness symposium in Iqaluit last week. The purpose of the gathering was to provide a place for health workers and researchers from the Arctic Council’s member states to share best practices and learn from each other. (PHOTO BY JIM BELL)

Though suicide prevention and mental health are areas of life that only national and sub-national governments can do anything about, Arctic Council delegates from around the circumpolar world put a lot of energy last week into talking about it, especially what works and what doesn’t.

The two-and-a-half-day gathering at the Iqaluit Cadet Hall, which covered one of Canada’s priorities for its chairmanship of the Arctic Council, was organized under the Arctic Council’s sustainable development working group.

And, at the end of it, the working group planned to produce a report that will lead to a “deliverable,” or special document which the eight Arctic ministers are expected to sign April 24 when they meet in Iqaluit.

Leona Aglukkaq, the Nunavut MP and federal minister responsible for the Arctic Council, touted the project as an example of Canada’s overarching theme for its chairmanship: “development for the people of the North.”

“The well-being and prosperity of the people of the North had to be at the top of the Arctic Council’s priorities and that’s exactly what we’re doing,” she said in a speech at the opening of the symposium.

But, at the same time, she encouraged delegates to seek solutions that take particular communities and cultures into account, saying “we are all gathered here in Iqaluit because we recognize that this is an issue that affects the entire circumpolar North.”

Aglukkaq said such a high-profile meeting helps remove the stigma associated with mental health and creates a place for “sharing and learning to determine best approaches that work.”

Paul Okalik, the Nunavut health minister, drew on his own experience to frame the issue.

“I group up in the community of Pangnirtung, a small community just north of here, with a schizophrenic father…if you can survive that, you can pretty much survive anything,” he said.

Okalik told delegates also that he lost a brother to suicide and “dealt with my own issues.”

“My story is a reflection of our territory and the many challenges that we face. And yet I must say I am optimistic,” he said.

For example, Okalik said that in Nunavut, mental disorders are now recognized as treatable illnesses and that “we have made progress.”

And he listed efforts that the Nunavut health department has made to employ more psychiatric nurses, mental health consultants and child outreach workers to improve the quality of local care.

He also said the Government of Nunavut is looking at using social media and online or remote mental health services.

As for the symposium, Okalik reminded the researchers and policy experts in the audience that it’s people living in Arctic communities who matter.

“And so we will take the knowledge and apply it for you and me, but mostly for the communities we live in and the people,” he said.

Laurence Kirmayer, director of social and transcultural psychiatry at McGill University, reminded delegates that “the regions we’re talking about are home to many diverse indigenous peoples.

“They share some factors in their different cultures based on ecological realities but they also have very different experiences in terms of creative expression, identity, spirituality and so on,” Kirmayer said.

But despite that diversity, an enforced loss of control is one uniting factor, he said.

“Many share a common history of gradual encroachment by colonizing powers and nation states that imposed complex bureaucratic structures and entangled them in economic situations, to some degree beyond local control. That’s created a whole complex set of problems that have impacted on people’s lives,” he said.

That, in turn, means policy makers must understand the histories of the communities they intend to help, Kirmayer said.

“We have to think in terms of the way these large contexts work their way into the life of an individual family and person,” he said.

And he pointed out that the alarming suicide rates in Arctic regions such as Nunavut, Greenland and Chukotka are “like the tip of the iceberg,” an indicator of widespread mental health problems.

“Suicide is the most disturbing and painful event in terms of mental health, but there are many people with mental health problems that do not manifest themselves in suicide and we need to keep that in mind,” he said.

The symposium featured panel discussions on various themes and a closed youth forum at the francophone centre.