Arctic Council: EU out but China likely in, academics say

China wants to sit “where the heavy hitters are playing” 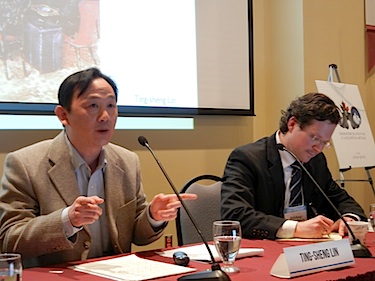 MONTREAL — The word on the fate of nations seeking observer status at the Arctic Council is that the European Union is likely out, and China is likely in.

This was the opinion of most participants at an April 26 academic conference on Canada and the Arctic Council at the Montreal-based Observatoire de la politique et de la sécurité de l’Arctique, an Arctic policy and security think-tank.

That’s because for admittance of an observer to the consensus-based Arctic Council, eight member states of the council must agree on all decisions. That means every member state holds an effective veto.

Right now, the EU and China hold “ad hoc” observer status, which means they must seek permission to attend each Arctic Council meeting.

Only six nations — France, Germany, the Netherlands, Poland, Spain and the United Kingdom — enjoy observer status at the moment.

If the efforts of a Nunavut-based group called “No Seal, No Deal” are successful, consensus may be lacking on the EU request to become another observer at the Arctic Council.

The “No Seal, No Deal” petition, started by Iqaluit resident Karliin Aariak, asks that Canada, as a member of the Arctic Council, refuse to grant observer status to the EU until the seal ban is lifted.

At the Montreal conference, EU researcher Sébastien Maffione still offered several reasons why the EU should be admitted as an observer to the council — not once mentioning the recent controversy over the EU seal ban.

Maffione said those reasons include the EU’s support for Arctic tourism, its contribution to research, its use of Arctic fisheries and its future dependence on Arctic gas and oil, he said.

China’s interest in the Arctic is no less keen — but less controversial.

China has an interest in the Arctic mostly because climate change will open new, shorter maritime shipping routes, said Ting-Sheng Lin, a political scientist at University of Québec in Montreal.

China, as a trading nation, is interested in using the Northern Sea Route north of Russia to export goods to Western Europe, as well as the possible use of trade routes to North America over the North Pole that could be opened up by climate change.

Arctic policy expert Whitney Lackenbauer suggested China also wants to join the Arctic Council because it wants to sit in the same room “where the heavy hitters are playing.”

Other states and organizations applying for observers status include Italy, Japan, Korea, Singapore and several non-governmental organizations such as Greenpeace, the World Meteorological Organization and the Association of Polar Early Career Scientists.

But whether or not they get into the Arctic Council, the eight-nation body has reached “a fork in the road,” Lackenbauer said.

That’s because many countries and interests increasingly see the Arctic as a global place — and not just belonging to Arctic people or nations.

If these parties don’t get satisfaction from the Arctic Council by being let in, they’re likely to circumvent the council.

This means they would make their own bilateral deals with member states or join other competing groups, like the Arctic Circle, Lackenbauer said.

That echoes what Norway’s Espen Bath Eide said about the Arctic Council this past January at an event in Tromsø, Norway: “we want people to join our club. That means they will not start another club.”

At the April 26 conference in Montreal, some participants suggested a spurned observer applicant like the EU or China could retaliate with trade tariffs or other measures.

As for what Canada’s new minister responsible for the Arctic Council thinks about allowing new members into the council, look to comments made by Leona Aglukkaq.

“The ban on seal products adopted in the European Union was a political decision that has no basis in fact or science,” said an April 25 statement from two federal cabinet ministers, including Aglukkaq.

Last October Aglukkaq also said new observers at the Arctic Council would have to demonstrate “respect for indigenous people” as part of the criteria for permanent observer status that all applicants must meet.

“The European Union would have to meet that criteria. They would have to demonstrate the support of the indigenous groups and I’m looking forward to reviewing that proposal,” she told reporters at the time.